It started with a tackle. And then another. There was even need for a little dribble. But then, in Kemar Roofe’s own words, ‘I just had to get rid’.

What followed was a goal Rangers boss Steven Gerrard described as the best he had ever seen live. ‘Genius’ he called it, a 55-yard strike that sailed above the Standard Liege goalkeeper and into the net, bouncing only once, right on the goal-line.

That Roofe executed his effort on a pitch submerged in water added to its audacity. The 93rd-minute goal sealed a 2-0 victory during last Thursday’s Europa League opener in Belgium, the country where Walsall-born Roofe played before this summer’s £4.5million move from Anderlecht to Ibrox.

Kemar Roofe’s goal for Rangers last night was the furthest distance ever for a goal scored in the UEFA Europa League ?

And the 27-year-old told Sportsmail: ‘I came on with about 15 minute to go, just to help protect a 1-0 lead really. My main focus was to be a release for the defence.

‘So I was dropping back, trying to be an extra body. The ball fell and I managed to get around it. All I’m thinking is, “Win the tackle, if I don’t, they’re in a good position”. I won the ball but it wriggled out. I ran through a second tackle. You don’t want to let the boys down.

‘But then another defender comes towards me. Okay, I’ll just nick it around him. In my mind I’m like, “Keep the ball. Keep the ball”. My plan was to run as far as I could with it.’

The only problem for Roofe was the pitch. He would have needed a boat and not boots to reach the corner flag.

‘They were the worst conditions I’ve ever experienced as a professional. The manager even told us not to pass the ball on the grass, if you’re going to pass then do it in the air. You were running through puddles. 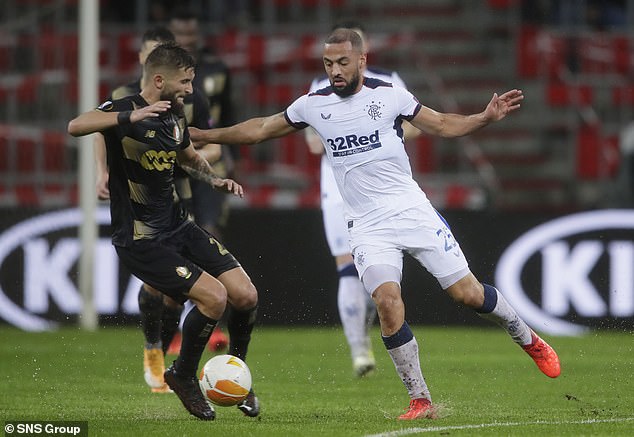 ‘So I’ve got away from the traffic and thought, “You know what, I’m going to have a go here”. It was either run for the corner, which was impossible, or shoot for the bottom corner – I just had to get rid!’

Get rid he did.

‘As I shot I fell on the floor and lost track of the ball. But it took an age. Honestly, it felt like it took minutes, not seconds. You then see it land, finally. Wow.’

‘My old coaches used to get frustrated with me trying this sort of thing at least once a season. But in that situation the keeper is always out of his goal. If you can get it on target then it will go in. That’s easier said than done, though.’

How close has he come to pulling it off previously?

‘Not very… it usually trickles wide! Growing up I had a bucket list of goals I wanted to score. Every Christmas I’d get the compilation DVDs of Premier League goals, so I was aware of David Beckham’s (in 1996), even though I was only three at the time. 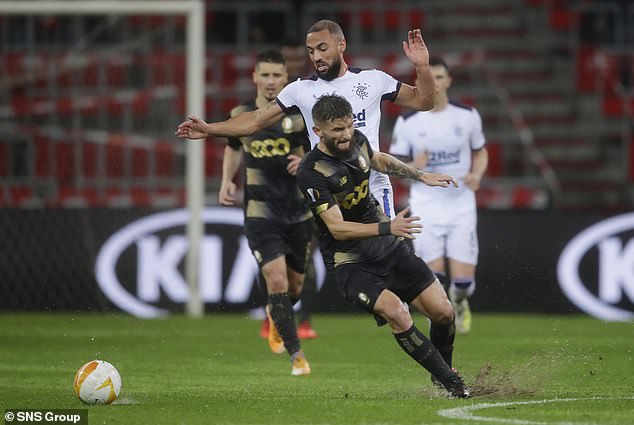 ‘I’ve always had it in my head, “I wish i could score from my own half one day”. And now that I have it hasn’t really sunk in. I think I’ll only look back when I’ve retired and really appreciate how good a goal it was.’

Piers Morgan tweeted the goal to his 7.6million followers and, at last count, the online views were over three million. Not that Roofe is counting.

‘Every day someone tells me something new – Piers Morgan, American TV. It’s crazy. But I honestly don’t watch any of it. If someone doesn’t tell me then I won’t know. I never watch TV. I’m not on Twitter.

‘That’s the way I like living when it comes to football. I keep my focus on me. It’s easier that way. I may regret it when I retire, think that maybe I should have lived in the moment a bit more. But that’s just my way of staying grounded.’

Gerrard’s words in the wake of his goal also ensured Roofe was not getting carried away. He laughs as he reveals: ‘The manager said it was the best goal he’d ever seen, but also that he still wouldn’t start me!

‘But I didn’t mind that, we’ve got a plan to get me back to full fitness. He knows what he’s doing. One goal shouldn’t change that. 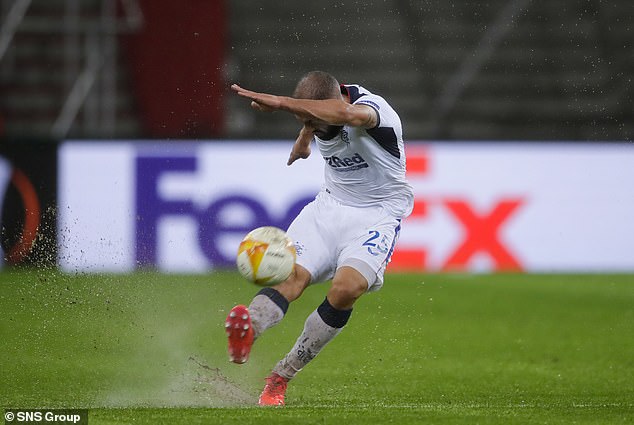 ‘He told me in the dressing-room it was the best he’d ever seen, but I think he was more impressed by the first two tackles and keeping the ball, rather than the strike itself.

‘If you give 100 per cent for him and are brave, that’s what he wants. I really like him. Him and his staff are excellent. Their knowledge, their understanding. It’s not easy to transfer his skills as a player to management, but I think he’s done that. He demands a lot from us. He knows where we want to get to.’

Where they are is top of the Scottish Premiership, six points clear of Celtic in a bid to end their rivals’ run of nine straight titles.

Sunday brought a 2-0 win over Livingston in which Jermain Defoe scored his 300th career goal, an outrageous first-time cushion from a ball over the top. 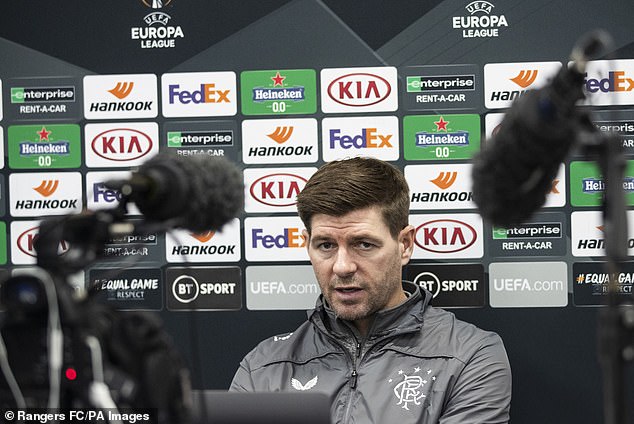 ‘Jermain is unbelievable. When he scored his goal he ran pointing towards me on the bench. Before the game we were talking about different runs to make, our movement in behind. And then he scores a goal with that exact run. What a goal it was. It must be the goal of the season – in the league anyway!’

BBC Scotland are asking online readers whose goal was best – Roofe or Defoe?

We think it was him.

His own departure from Elland Road last August – after 32 goals in three years – came as a shock.

Does he look back across the border now and wonder what might have been had he stayed with Marcelo Bielsa’s side?

‘Not at all. There’s no regret. Things happen for a reason. I went to play for the biggest club in Belgium under Vincent Kompany. It was hard to turn down. I had one year left on my contract at Leeds and the move offered security.

‘But I’m not at all surprised at how well they’ve done. I know how hard they train every day. You won’t find a fitter team than Leeds in the Premier League. When you’re fitter than the opposition, man for man, you’re ahead already.’

He watched Bamford’s treble as a fan, and says: ‘I texted Patrick straight away. I was so pleased for him. He gets a lot of stick. It’s not nice at times. For him to score that hat-trick – and what a hat-trick it was – it was well deserved.’

Great goals, yes, but nothing gets close to Roofe. So after nine years of failed attempts, will he try it again?

‘It’s not something you plan. It’s all about instinct. So if it’s on, yeah, why not?’