Ancelotti: Our match against Inter Milan will be complicated in the Champions League 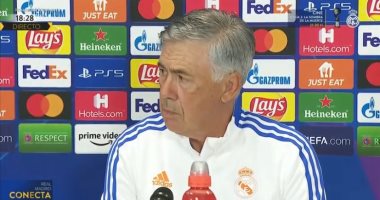 Real Madrid coach Carlo Ancelotti spoke about his team’s match against Inter Milan, scheduled to be held at nine in the evening, tomorrow, Wednesday, in the first round of the group stage of the Champions League.

Carlo Ancelotti said during the match press conference: “The team has worked well, I think we evaluated ourselves against Celta Vigo and tomorrow is another story. To control and play well, which is something special for the club.”

Carlo Ancelotti added: “The tenth? For me the Champions League has always been special, I won it twice as a player and several times as a coach. The tenth anniversary is very special and special.”

Carlo Ancelotti explained: “Inter Milan has great players, and they are living positive moments. They won the league in the last season.”

Carlo Ancelotti stressed about Vinicius: “I treat him like any other player, motivate him in training and tell him to focus on work, and the other thing is the quality of the player, he has desire and enthusiasm.”

Carlo Ancelotti continued: “Everyone sees that the only difference is his slowness and calmness in front of goal, but he is the same player in recent seasons, and I hope he continues.”

Carlo Ancelotti said: “Real Madrid is the favorite to win the Champions League? It’s hard to say, but Real Madrid will compete. The opponents are very strong so we will fight for everything.”

And Ancelotti continued: “Marcelo? Yesterday he trained well with the team, but in the end he felt some discomfort, the injury is not serious, but it prevented him from traveling with us, and Bale will be out for a few days.”

The Real Madrid coach commented: “Winning the league or the Champions League? I don’t know. The biggest thing that made me happy was returning to Madrid. What makes me more happy is to go to training every day.”

And Ancelotti added: “Alaba trained alone, but he is with us and he can play, Modric can take a rest, but we’ll see.”

The Real Madrid coach admitted: “It is possible to improve defense and attack, sometimes the team becomes unbalanced, but if all the players are well positioned, we can recover the ball.”

Ancelotti continued: “Feeling confident? In this club there is a somewhat different atmosphere, but the Champions League is always special for Real Madrid, it is no coincidence that they won 13 titles, it is the same confidence that I felt in my first stage.”

Ancelotti concluded his speech: “Back to San Siro? It is true that I worked at Inter when I was young, but then I grew up and changed the destination. Milan has always been the important opponent, but always with respect.”

TECNALIA ties with Chainlink to explore oracles applications beyond DeFi