Ancelotti: Real’s loss to Sheriff affected our pride and I will never coach Barcelona 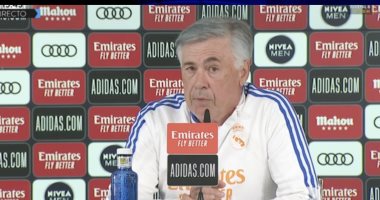 Real Madrid coach Carlo Ancelotti confirmed that his royal team’s loss to Moldovan Sheriff in the Champions League had greatly affected the pride of the champions.

Carlo Ancelotti added, in the press conference that precedes the Espanyol match tomorrow in the eighth round of the League, by saying: “Our loss against Sheriff affected our pride, but we will respond, of course, we will do whatever it takes to win.“.

Carlo Ancelotti responded about coaching Barcelona by saying: “Training Barcelona? With all due respect to a great club like Barcelona, ​​but I can’t disagree with my story, and my story is Real Madrid.”

Ancelotti continued: “The players who played fewer minutes against Sharif will certainly play more tomorrow in the Spanish League.

And Carlo continued: “Hazard? He’s fine, he lacks a little continuity, little by little he will return to what he was before, he will show his quality.”“.

And the Italian coach added: “When we don’t have the ball, the best system is 4-4-2, where we try to get the largest number of players to cover the lines, and we have to fight Atletico and Barcelona, ​​they are two good teams. I will watch the match as a football fan if we do what we have to. We will fight to the end against them.“

Ancelotti continued: “Camavinga has developed well because he has character and quality. He has to improve, but he is young and has time, and Ferland Mendy is satisfied. We are not forcing him to do so because we want to take advantage of the international break to make him ready to play, as well as Marcelo and Carvajal will play after a while. international stop.

And Ancelotti continued: “Mendy? He’s doing well, he’s starting to work with the group, we don’t want to put more burden on him, we want to take advantage of the international break to be ready, I think he can play after the break, as is the case with Carvajal and Marcelo.“.

Carlo added: “Casemiro? Everyone sees him as tired, but I see him as strong and making a great contribution to the team“.

The Real Madrid coach continued:” We have to change the dynamic of the team in the upcoming matches and strive for balance, as I said 10 days ago, difficult moments will come and we have to deal with them.“

Ancelotti concluded: “I accept criticism, criticism can be fair or not, but this is normal, I am in a high position and this makes me feel excited, and lucky to be here.“.

Borussia Dortmund vs Augsburg.. 1-1 draw ends the first half of the Bundesliga match

Is it safe to buy Bounce Token and ARPA Chain after they were listed on Coinbase Pro?