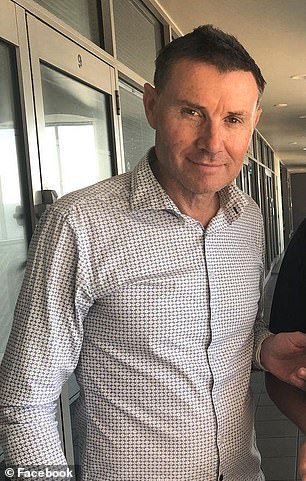 Federal Liberal MP Andrew Laming will quit politics after relentlessly harassing at least two women on social media and allegedly taking a photo of another woman while she was bending over.

Treasurer Josh Frydenberg announced on Sunday morning Mr Laming will not be recontesting his seat of Bowman, in Brisbane’s southeast, after furious backlash over his ‘unacceptable behaviour’.

‘Andrew is not re-contesting the next election for the LNP, we’ll find a new candidate and that will be up to the preselectors. Andrew is also taking some time to seek some additional support and that is important given his behaviour has been unacceptable,’ he said.

Mr Frydenberg said the decision was made after Mr Laming spoke with Prime Minister Scott Morrison.

Mr Morrison slammed Mr Laming’s trolling of two women on Facebook – which pushed one of them to the brink of suicide – as ‘not acceptable to both women and also to the Prime Minister’.

‘The Prime Minister spoke to Andrew yesterday and made it very clear what was expected of our MPs. Andrew has reflected on that conversation with the Prime Minister and… he has decided not to contest the next election,’ Mr Frydenberg said.

However, the Treasurer rejected calls for Mr Laming to leave parliament immediately. If he did exit politics straight away, it would leave the government with a minority.

‘He was elected by representatives and constituents of his community to support them in the parliament – that is what the coalition does,’ Mr Frydenberg said.

In a statement released hours after Mr Frydenberg’s comments, Mr Laming confirmed ‘I will not be contesting the next federal election in any capacity’.

‘The common thread of the last week has been not demonstrating anything close to understanding how my actions affect others. I intend to own those mistakes,’ Mr Laming said.

He said he would be receiving clinical counselling as he seeks help to better understand how his actions affect others.

‘Starting tomorrow I will get assistance with courses in empathy and appropriate communication, not just to be a better MP, but to be a deeper and more empathetic person than what the recent events have demonstrated,’ Mr Laming said. 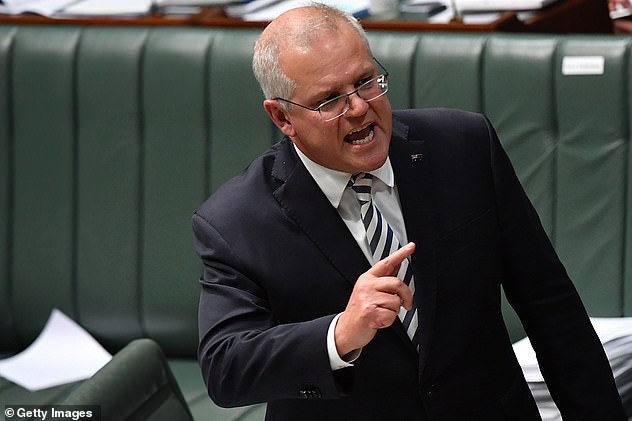 ‘I will also be obtaining clinical counselling, for a duration decided by others, but I will aim to complete it by the next Parliamentary sitting. I intend to get that help immediately and at my own expense.’

Last night I took health leave from all parliamentary, electorate and committee work; effective today with my office continuing to serve my community.

Starting tomorrow I will get assistance with courses in empathy and appropriate communication, not just to be a better MP, but to be a deeper and more empathetic person than what the recent events have demonstrated.

The common thread of the last week has been not demonstrating anything close to understanding how my actions affect others. I intend to own those mistakes.

I will also be obtaining clinical counselling, for a duration decided by others, but I will aim to complete it by the next Parliamentary sitting. I intend to get that help immediately and at my own expense.

I hope some privacy can be extended to me and my family in this time, and I ask my local community to be kind to them.

Being elected by the people of Bowman at six consecutive elections has been the greatest honour of my life. I will not be contesting the next federal election in any capacity.

Opposition Leader Anthony Albanese said Mr Laming brought ‘disrepute and disgrace’ to parliament and should leave before the next federal election.

‘I’m really appalled by Andrew’s conduct,’ Senator Henderson told the program, while Ms Allen said ‘What he has been doing is completely outrageous’.

Deputy Nationals leader David Littleproud denied Mr Laming was just retaining his position because it would throw the government into minority if he was kicked out.

‘With respect, I don’t think that’s the case. It’s about making sure we do the right thing,’ he told the Sky News’ Sunday Agenda program.

Mr Laming on Saturday stepped down from all parliamentary roles following complaints about his conduct online and the allegations he took a photo of a woman who accidentally showed her underwear while bending over.

The Queensland LNP backbencher revealed he had been ordered by Mr Morrison to undergo sensitivity training.

‘I will step down from all Parliamentary roles effective immediately and complete both the counselling courses I committed to; as well as additional clinical counselling, and ask for privacy while that is completed,’ he said in a statement.

‘I would like to thank my local community for their understanding during this time and assure them my electorate staff remain available to them.’ 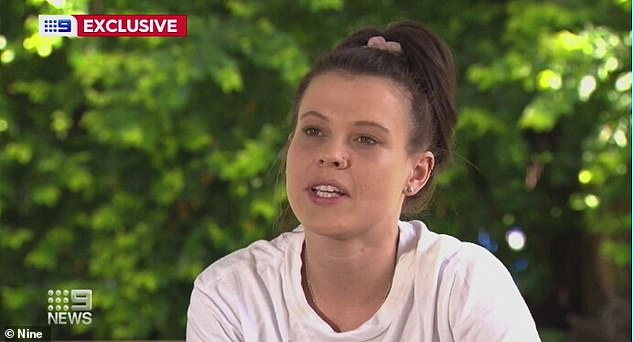 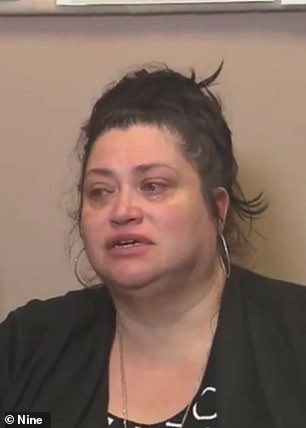 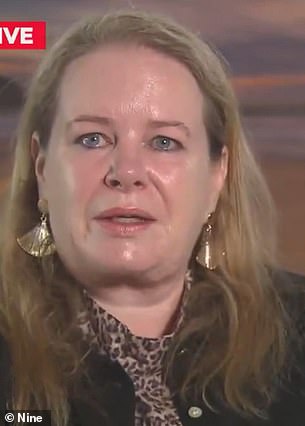 Mr Laming accused Alix Russo (left) of misappropriating funds at a homeless charity, while Sheena Hewlett (right) said she was forced to contact police after claiming Mr Laming hid in the bushes and took photos of her in a public park

The decision to step down comes after Brisbane mum Crystal White accused Mr Laming of snapping a picture of her bottom and exposed underwear while she put drinks in a fridge at a landscape supply business in 2019.

‘The photo was really inappropriate, especially when I was bent over,’ Ms White told Nine News.

Sean Blinco, who was working at the time, said the store manager forced Mr Laming to delete the photo.

‘Remember that time you took a photo of an employee bending over at local landscaping yard, you perve? We had to force you to delete it before you left the store. We remember,’ he wrote on Facebook.

Mr Laming replied: ‘I do but it wasn’t meant to be rude. I thought it was funny but your reaction was awkward.’

His response was then shared with Ms White by Nine News.

She fired back: ‘My reaction is, how is that funny? What’s funny about taking a picture of a lady bending over?’

Mr Laming on Thursday apologised in Parliament for trolling two other women online, then backtracked on social media and claimed he ‘didn’t know’ what he was saying sorry for. 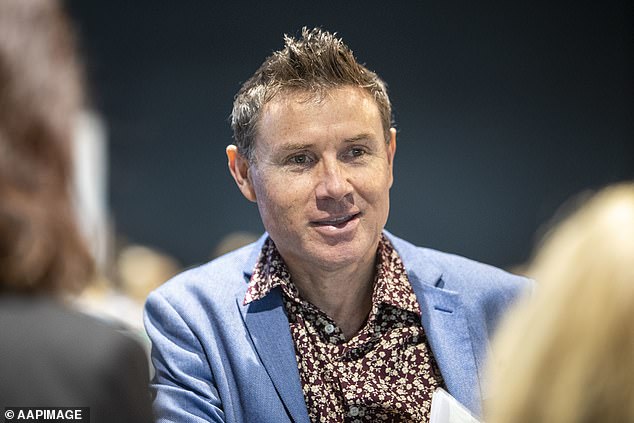 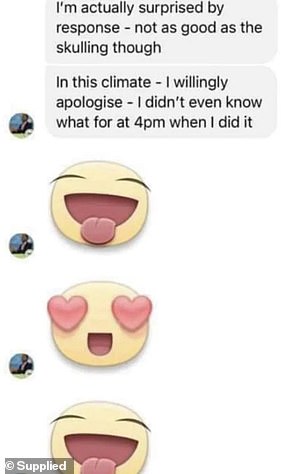 ‘In this climate – I willingly apologise – I didn’t even know what for at 4pm when I did it,’ Mr Laming wrote on a Facebook post, which has since been deleted.

Mr Laming was forced to apologise after telling a charity worker, Alix Russo, on Facebook: ‘Unfortunately for you, I make the rules and you follow them.’

Ms Russo, a single mother who said the trolling left her suicidal, told Nine News: ‘I want to be alive, I don’t want to be attacked anymore.’

‘This man has to stop. He cannot continue abusing his community like this.’

Sheena Hewlett, a schoolteacher, said Mr Laming – who was elected to Federal parliament in 2004 – asked for her teaching timetable then hid in bushes while taking photos of her in 2019. The incidents were reported to police.

Mr Laming’s social media response to his own apology was accompanied by several laughing emojis – which he claimed were accidentally posted by his phone when he put it in his pocket, news.com.au reported. 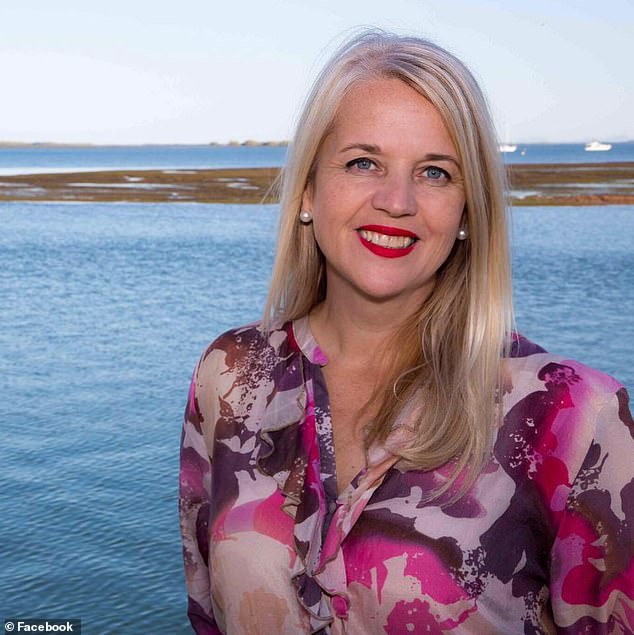 ‘It’s just been constant. I blocked him years ago for my own mental health,’ she said.

‘The character assassination, the personal nature of the way he’s posting, is harassing and bullying by its very existence.’

Ms Richards said locals in Redlands have been left ‘fearful’ of Mr Laming due to his conduct online.

A spokesman for Mr Laming rejected Ms Richards’ claims about the MP’s online behaviour as his social media accounts post about political issues in the electorate. 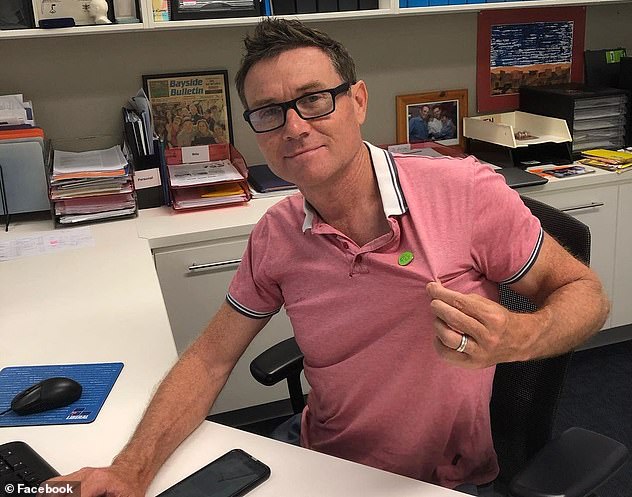 Ms Hewlett has also said she complained about Mr Laming ‘countless times’ both under Mr Morrison and Malcolm Turnbull’s leadership, The Australian reported.

Retired former MP Tony Windsor added his voice to an avalanche of calls on social media to remove Mr Laming from office.

‘Now that Andrew Laming has made light of his apology and your directions to apologise Scott Morrison you have two options – sack him or call in the police to investigate his behaviour.’ 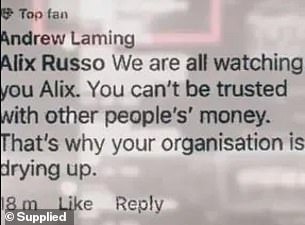 ‘The fact that he thinks it is all a bit of a joke leaves you with no alternative. Lead.’

On Twitter, Mr Laming was trending with the hashtag #SackLaming also popular.

‘I’ve checked with a couple of Liberal National party people I am familiar with in Queensland and said, ‘Is this bloke a complete f***wit?” 2GB radio host Ray Hadley said on air.

‘And they replied yes, he is. He is,’ Hadley said.

Mr Laming apologised for causing Ms Russo and Ms Hewlett distress in a speech in Parliament on Thursday. He also apologised to the women in writing.

It came after being hauled into the PM’s office, conceding his social media commentary had caused significant distress to two ‘well regarded individuals’ of his electorate.

‘Every Australian has the right to feel safe online and Mr Laming has made a commitment to change his online communication practices.’

Mr Morrison has spoke to Mr Laming once again regarding his online behaviour and ordered him to complete an awareness course. 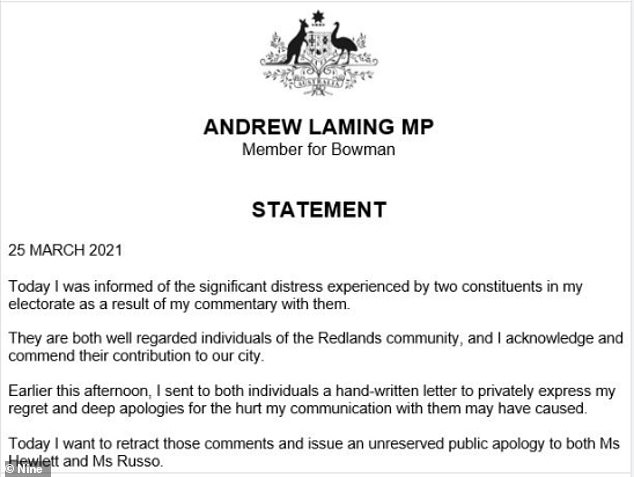 A statement issued by Mr Laming on Thursday, where he issued ‘an unreserved public apology’

‘I want to express my regret and deep apologies for the hurt and the distress that communication may have caused,’ Mr Laming said in his apology.

‘I want to retract those comments and issue a public unreserved apology.’

The Liberal National Party backbencher, who regularly attracts criticism for his behaviour and comments on social media, acknowledged he had lessons to learn about his use of words.

‘I have made a concerted effort to understand the impact of these responses upon others and demonstrate a clear change in the way I communicate,’ he said.

‘I want to say to any person who has received correspondence from me which fell short of what they expect from an MP that I intend to own that failure and apologise without hesitation.’

Greece expresses its readiness to help restore traffic through Suez