The champagne was flowing freely, the dancefloor filling as Abba’s Waterloo boomed from the speakers, and two silver-haired men in their 60s mingled happily at a party to mark my civil partnership.

Unlike my other guests, however, these friends were sipping fruit juice.

The next day — Sunday — was the busiest of their working week and they couldn’t risk a hangover.

Jon and Peter are Roman Catholic priests who have been in a celibate relationship for at least two decades.

Today they, like me, are celebrating a landmark in the Church’s history as Pope Francis offers his clearest support to date for gay rights by endorsing same-sex civil partnerships.

‘Homosexual people have the right to be in a family,’ the 83-year-old Pope says in Francesco, a newly released documentary film. ‘They are children of God and have a right to a family. Nobody should be thrown out or be made miserable over it.’ 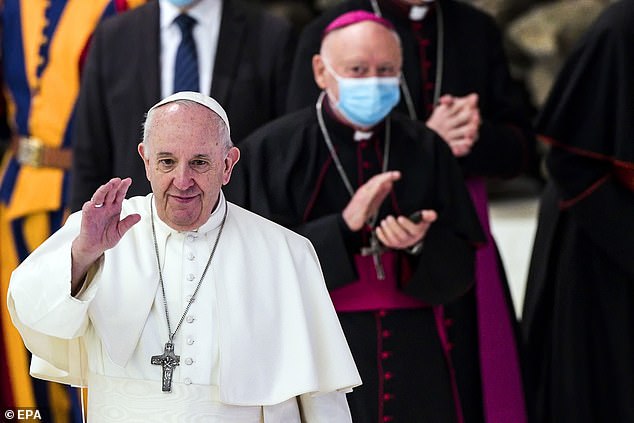 The Pope’s pronouncement goes some way to repairing his reputation as a progressive pontiff. Indeed, for liberal and younger Catholics, any reform has been a long time coming.

But for traditionalists among the estimated 1.2 billion Catholics worldwide, Francis’s words are seismic.

They threaten a schism with the Vatican like no other — and nowhere more so than in Africa, where homosexuality is illegal in many countries.

The continent is home to almost 200 million Catholics and the Church is growing strongly.

Between 1980 and 2012 (the last year for which data is available), the number of Catholics in Africa grew by 283 per cent, compared with just 6 per cent in Europe (with 277 million Catholics and an ageing population).

Bishops in Africa are predominantly social authoritarians who have made plain their feelings on homosexuality.

Take the words of Cardinal Robert Sarah, of Guinea, who in 2015 declared that ‘Western homosexual and abortion ideologies, and Islamic fanaticism’ are to the 21st century what the twin ‘beasts’ of Nazi and communist ideology were to the 20th century.

He is unlikely to agree with Pope Francis’s new stance.

Nor are the Catholic Bishops Conference of Nigeria, who last year decreed that ‘lesbian, gay, bisexual, transgender and queer (LGBTQ) were disordered sexual orientations that could not be accepted as a normal way of life’.

In fact, the Pope’s words have already sparked a bitter row — and not just in Africa.

In the United States, which has about 51 million Catholics, Church leaders have lost no time in making their feelings known.

Bishop Thomas Tobin of Providence, Rhode Island, yesterday said the Pope’s statement ‘clearly contradicts what has been the long-standing teaching of the church about same-sex unions’.

And in South America, which accounts for more than 40 per cent of the global Catholic population (including Argentinian Pope Francis), homophobia is no less widespread. There, Catholic priests have combined with Evangelical churches to organise anti-gay marches in countries including Colombia and Peru.

In the Philippines, with 75 million Catholics and growing, Bishop Arturo Bastes said yesterday that he had ‘very serious doubts about the moral correctness’ of the Pontiff’s position.

Seasoned Vatican observers are already asking whether a fragmented Church globally will be Pope Francis’s legacy, although his supporters argue that this was a carefully considered intervention.

Even on his own doorstep, he faces a battle with his predecessor, Pope Benedict XVI. 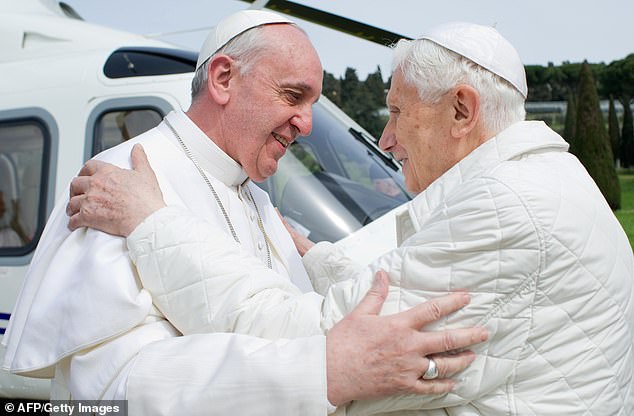 Even on his own doorstep, he faces a battle with his predecessor, Pope Benedict XVI. (The pair pictured together in 2013)

Catholicism and homosexuality have long had a troubled relationship. In 1986, when the Church was under the stewardship of the popular but deeply conservative Polish John Paul II, the Congregation for the Doctrine of the Faith described homosexuality as ‘a strong tendency ordered towards an intrinsic moral evil… marriage is holy while homosexual acts go against the natural moral law’.

For traditionalists, little has changed since that hardline edict.

In 2003, the Congregation updated its teaching on whether there should be legal recognition for gay people, saying same-sex marriage was ‘deviant’.

As for gay men and women adopting children, the document described this simply as ‘violence’ against children.

After resigning in 2013, Benedict indicated that he would live in quiet seclusion in the Vatican as the Pope Emeritus. But he soon emerged as a backseat driver and arch-critic of his successor’s attempts to modernise.

In a biography published this year, 93-year-old Benedict accused opponents of wanting to silence him, while associating gay marriage with the Antichrist. Now, by speaking out in favour of civil partnerships, Pope Francis is directly challenging his predecessor.

In the past, he has tried to make his sympathies clear but in a less high-profile fashion. A decade ago, as Archbishop of Buenos Aires, he opposed same-sex unions in Argentina — but five years ago, when asked about gay priests, he responded: ‘Who am I to judge?’

He continued: ‘A person once asked me… if I approved of homosexuality. I replied with another question: “Tell me, when God looks at a gay person, does he endorse the existence of this person with love, or reject and condemn this person?”.’

There was more of the same in the final draft of the 2014 Synod on the Family in the Vatican, which contained, at the Pope’s instigation, a reference to the ‘gifts and qualities’ of homosexuals.

Predictably, traditionalists launched a fightback against what they called the Lavender Mafia in the Vatican, shamefully using the revelations about paedophile Catholic priests to conflate child sex abuse with homosexuality.

The sin of ‘homosexuality itself’, not paedophilia, they argued, lay at the ‘root of the scandal’.

In August 2018, American Cardinal Raymond Burke declared: ‘There is a homosexual culture, not only among the clergy but even within the hierarchy, which needs to be purified at the root.’

Some Vatican critics are cynical about the timing of the new documentary, seeing it as a ploy to divert attention from a growing financial scandal in the Holy See.

Last month, the Pope effectively fired Cardinal Giovanni Becciu, the powerful head of the office that oversees the canonisation of saints. He has been accused of embezzlement of Vatican funds, which he denies. Last week, a 39-year-old Italian woman linked to the Cardinal was also arrested.

Francis, his critics say, is a shrewd political operator who knows a controversy over civil partnerships will overshadow the stench of financial corruption at its heart.

The real test for gay Catholics such as me will be if Pope Francis one day permits civil partnerships to be blessed in church. That might drive traditionalists from the faith — but we can do without their hatred for ‘deviants’ who simply wish to have our loving relationships recognised by the Church to which we belong.