Queensland Premier Annastacia Palaszczuk has come under after defending her decision to get the Pfizer jab – despite being eligible for AstraZeneca – so she can travel overseas.

Ms Palaszczuk finally got her first dose of the jab on Monday morning after weeks of public backlash about her perceived vaccine hesitancy or lack of urgency.

The 51-year-old, who was the last state or territory leader to be vaccinated, later took to Twitter to explain why she had the Pfizer despite government advice that people over the age of 50 should receive AstraZeneca.

‘Today I got the Pfizer vaccine in the event I need to travel to Tokyo for the Olympics,’ she later wrote on Twitter, alongside a link to register for a vaccination with Queensland Health. 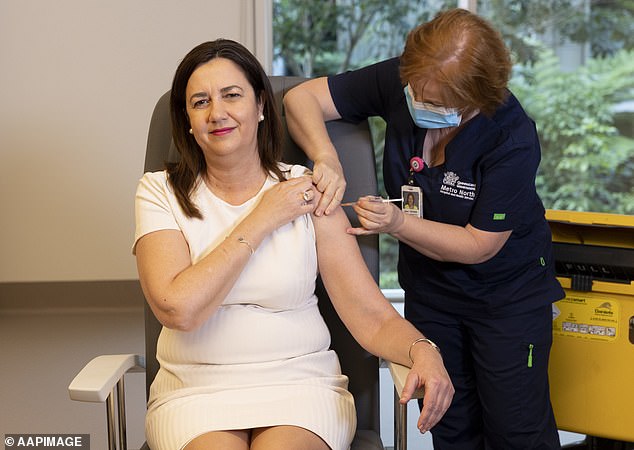 But outraged Australians slammed her reasoning as ‘tone deaf’ and ‘elitist’, as international travel restrictions remain in place for the public.

‘Oh you’re going to Tokyo? How nice for you,’ one person commented. ‘

‘I mean, many of us haven’t seen our families in years but hey, we can’t all be very important people doing very important things. Have such a fun time!’

Another added: This is messed up. Millions of Australians want to see their families but can’t leave and you’re getting vaccinated so that you might be able to go to the Olympics.’

‘Absolutely tone deaf when people haven’t seen family for over a year,’ someone else chimed.

Others shared their personal stories about how they had been personally impacted by border closures, with one describing Ms Palaszczuk’s move as a ‘slap in the face’.

‘It took me over six months, seven cancelled flights and $10,000+ to fly back to Australia to hug my terminally ill mum one last time and you are talking about ‘needing’ to go to the Olympics? Absolute joke and a kick in the guts to stranded Aussies. Assuming home isolation on return too,’ one person wrote.

‘Well that’s a smack in the face twice. First you obviously held off getting the AZ as long as possible, because it would take to long to get 2nd dose and second leaving the country for no reason. What a life..I get no choice! Not something I would of bragging about on social media,’ another added.

The example of Ms Palaszczuk and Prime Minister Scott Morrison getting Pfizer jabs had been cited by many over-50s who had refused the AstraZeneca vaccine that is available to them now.

Instead many are holding out for Pfizer or Moderna when they become available later this year, believing the leaders’ example indicated they were better options.

The Premier said earlier on Monday she had to get Pfizer to ensure she got her second dose before a possible trip to Tokyo next month as part of Brisbane‘s 2032 Olympics bid.

‘There may be a requirement for the state to present to the whole (International) Olympics Committee about the Olympics, and I wouldn’t have been unvaccinated and that’s why I had the Pfizer,’ Ms Palaszczuk told reporters.

Prime Minister Scott Morrison said he would not be travelling to Tokyo, but he would meet his Japanese counterpart at the upcoming G7 in the UK.

However, some felt there was no reason for Ms Palaszczuk to be travelling abroad while everyday Australians were stuck on home soil.

‘I am only a couple of months into 50, with a compromise immune system yet I still had to AZ! Why should anyone involved with the Olympic Games be treated with special treatment,’ one woman replied to Ms Palaszczuk’s tweet.

‘This is bad optics. I get that the intended message is that get vaccinated is our ticket to travel/open borders but this reeks of political elitism that alienates people,’ another added.

But a minority of people defended Ms Palaszcuk’s Japan trip, saying it was ‘part of her job’ and she needed to go to push Australia’s ‘national agenda’.

The Queensland Premier is the last Australian state or territory leader over the age of 50 to get the jab.

As part of the Queensland’s 1B cohort, Ms Palaszczuk and Dr Young have been eligible to get a vaccine since late March.

The premier said she had been offered the vaccine on day one of the rollout in Feburary but had turned it down because she did not want to jump the queue.

In mid-April, Ms Palaszczuk said she was unable to get her COVID-19 jab because she had had a flu shot first and had to wait two weeks.

Ms Palaszczuk said last week she had initially delayed her COVID-19 vaccination because she had to get a tetanus jab after her dog bit her during a play-fight in her backyard. 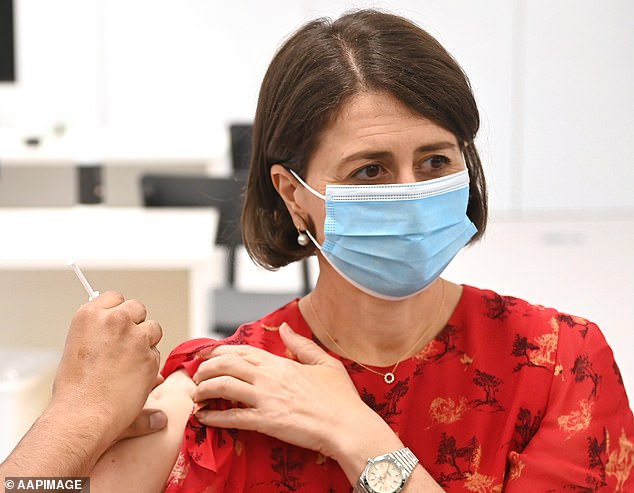 Queensland launched a vaccination blitz over the weekend resulting in 17,032 doses being administered across the state.

The state government opened up 18 vaccine hubs to any aged care workers or people aged 40-49 who had registered for the jab.

More than 936,000 doses have been delivered in Queensland with about 92,500 people fully vaccinated.

Pharmacies will also join the vaccine drive on Monday, with Queensland becoming the first state to give chemists the green light to do so from the federal government.

Almost 50 pharmacies in remote and regional areas will be allowed to give customers the jab.

Meanwhile, Ms Palaszczuk threw down the gauntlet for the federal government after she received a list of criteria for a dedicated Commonwealth quarantine facility to be built in Queensland.

‘After all quarantine is a federal government responsibility.’