A socialite accused of a vile graffiti attack on Roxy Jacenko’s office wall has hit back claiming he is the real victim as the PR queen plans to sue him for $140,000.

Anthony Hess, 40, and controversial street artist Anthony Lister, 41, allegedly sprayed ‘Roxy is a c***’ at her Sweaty Betty agency in Paddington, Sydney, and near her home in North Bondi, on April 24, 2019.

Ms Jacenko attempted to bring a restraining order against Hess in a Sydney court, in February last year, which failed after he denied the claim with the quip ‘gay guys don’t do graffiti’.

However, he and Lister were last week both charged with aggravated vandalism after GoPro footage of the crimes was allegedly found in Lister’s home.

In a candid interview with Daily Mail Australia, Ms Jacenko said she felt vindicated that charges were finally laid a year after Hess was cleared in court.

‘I will look at appealing to recover the damages and legal fees in excess of $14,000 in light of this new evidence and their charges,’ she said. 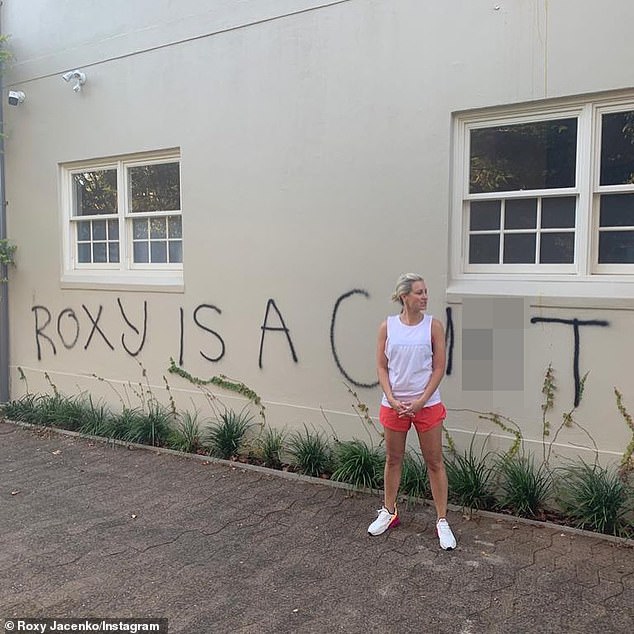 Roxy Jacenko with the offending words: The Sweaty Betty PR maven’s offices in Paddington, inner Sydney, were plastered with graffiti on April 24, 2019. Two men have been charged

Hess, who now lives in Los Angeles, in return rubbished the idea Ms Jacenko was ever genuinely afraid of him.

‘Why is Roxy bringing this up again a year later when I don’t even live in Australia anymore? She is obsessed with me and needs to move on,’ he said.

‘All that court nonsense was unnecessary attention seeking. She’s wasted a year of my life already and needs to go away.’

Ms Jacenko said the attack made her ‘scared and nervous for my children’ Pixie, 9, and Hunter, 6, and revealed the toll it took on her family.

‘Having to receive a call from my young son – who was four at the time – saying “mummy, why does it say you are a dog on the road” was something I will never forget”,’ she said.

‘I was absolutely terrified. I felt it necessary to implement regular and ongoing security patrols of my home, which to this day I still have in place, and of my office premises. 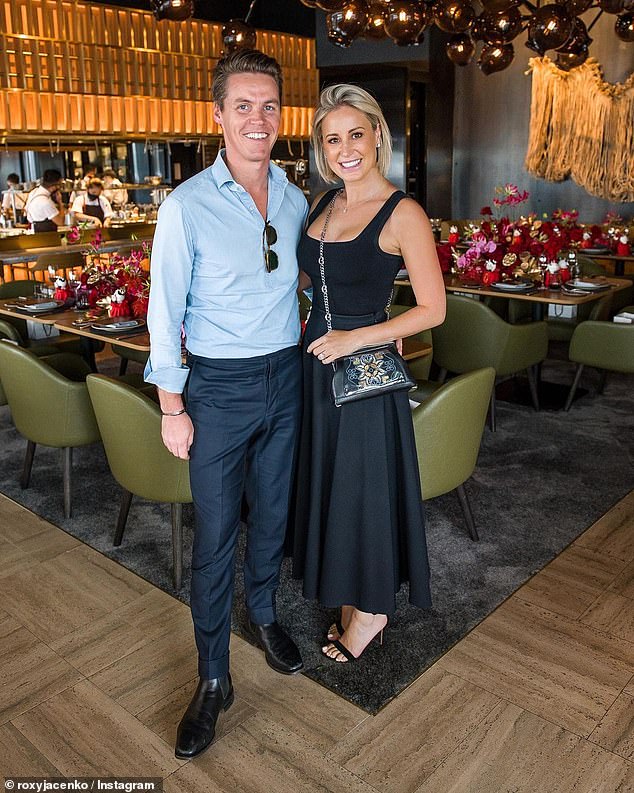 In a candid interview with Daily Mail Australia, Ms Jacenko (above with husband Oliver) said she was ‘absolutely terrified’ by the ordeal and revealed she had to take a raft of security measures to protect her family 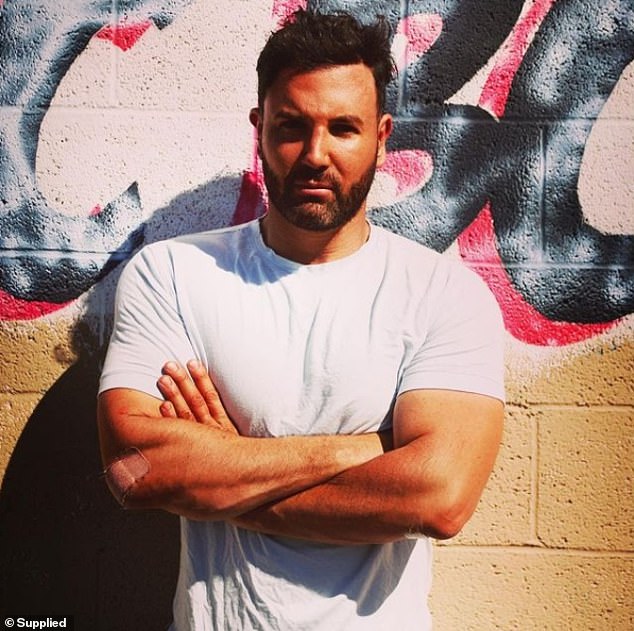 Anthony Hess, 40, is accused of spraying the graffiti as part of a campaign of harassment, but claims he is actually the victim

‘She lost the restraining order because there was no threat and she wasn’t genuinely in fear and the magistrate was right to say so,’ he said.

‘I trolled her a bit on Instagram but I never threatened her kids or did anything to scare them.

‘What is there to be scared of about me? I’m just a fun, bubbly gay guy. Besides, even if I did do it, it was just some graffiti – she wasn’t kneecapped.’

Hess claimed the prominent businesswoman was trying to make herself look like the victim when it was his life that was turned upside down by the restraining order.

‘Roxy is the real bully. Look at her history with staff, clients, nannies, even her friends like Candice Warner,’ he said in reference to Warner and Ms Jacenko falling out after trading blows on SAS Australia last year.

‘Why should I pay her court costs? I never asked her to go to court and spend money on lawyers. I had to spend tens of thousands of dollars on my own.

‘I’m not coming back to Australia any time soon and don’t have anything to give her.’ 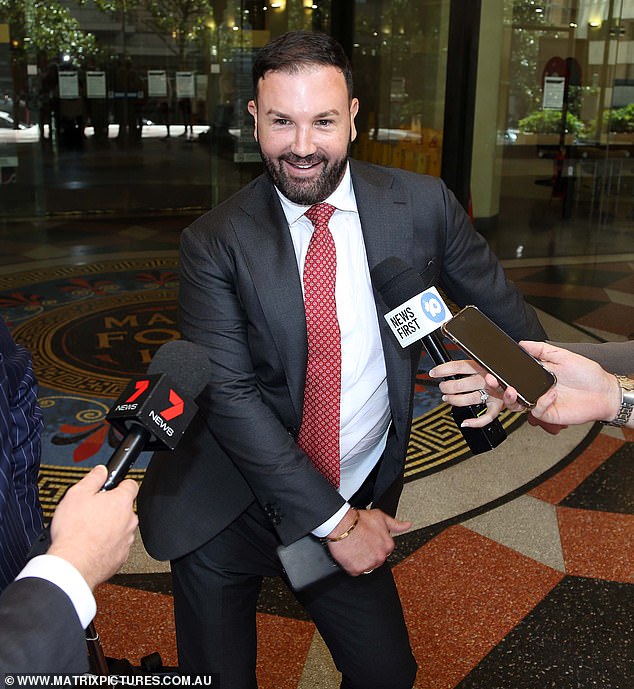 Ms Jacenko may get some answers in the months ahead as the police allegations that Hess and Lister were responsible for the attacks are tested in court.

She said she hoped the court process would prove her claims in the restraining order application were correct and the court was wrong to reject it.

The graffiti didn’t only hit her company’s offices but was scrawled throughout the eastern suburbs, near Bondi Junction and her home.

A police facts sheet alleged Hess and Lister sprayed the graffiti saying ‘Roxy is a c***’ on her office wall between 1.38am and 1.40am, and then on a nearby skip bin. 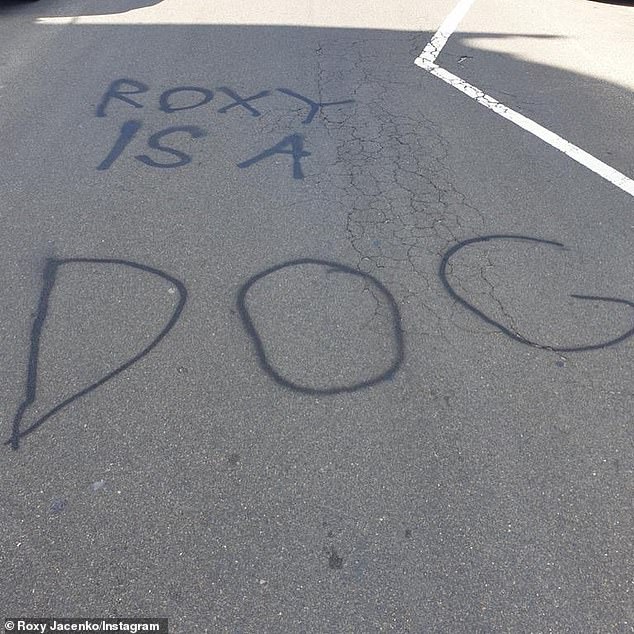 Ms Jacenko said she will ‘never forget’ having to answer her son, then five, about why there was graffiti on the road calling her a ‘dog’ 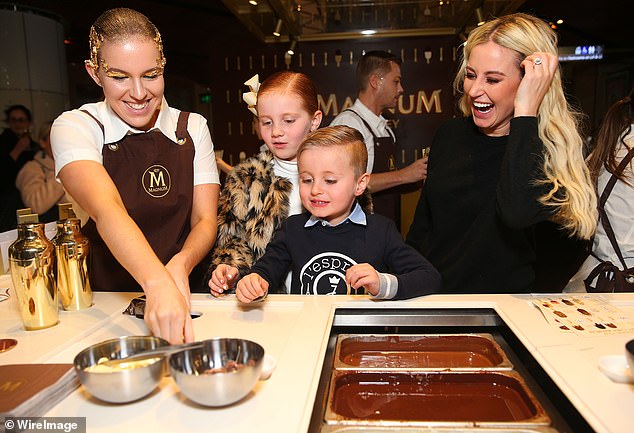 Ms Jacenko with her two young children Pixie and Hunter Curtis, above

However, police found a GoPro memory card during a raid on Lister’s home at Taylor Street, Darlinghurst, on March 10, 2020.

Lister is awaiting trial accused of drugging and sexually assaulting five young women he met through the art scene, along with a series of drug charges.

Ms Kalajian, who was not charged, was a close friend of Hess and supported him at court appearances during the restraining order battle.

In court documents, police alleged Hess spray painted the 7m-long obscene ‘Roxy is a c***’ graffiti while Lister watched and gave instructions before they both left – all filmed on Lister’s GoPro. 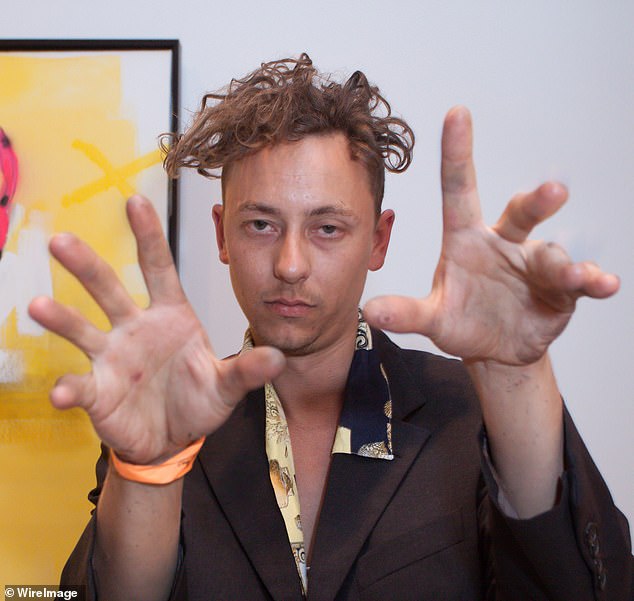 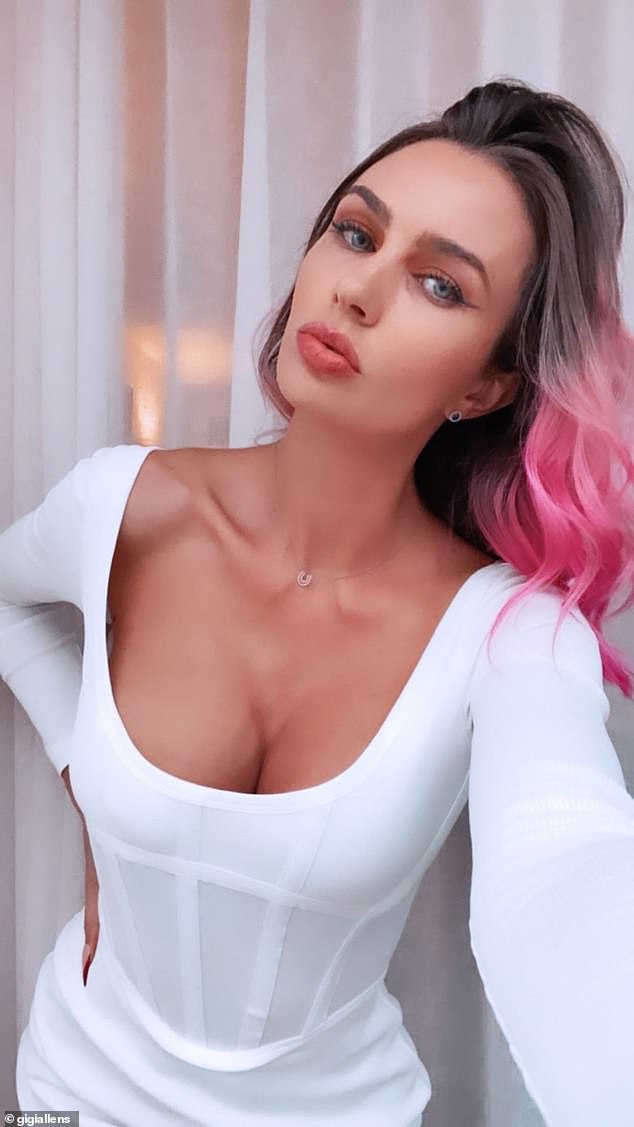 Lena Kalajian, a former friend of Hess’s, went to police about the graffiti last Monday 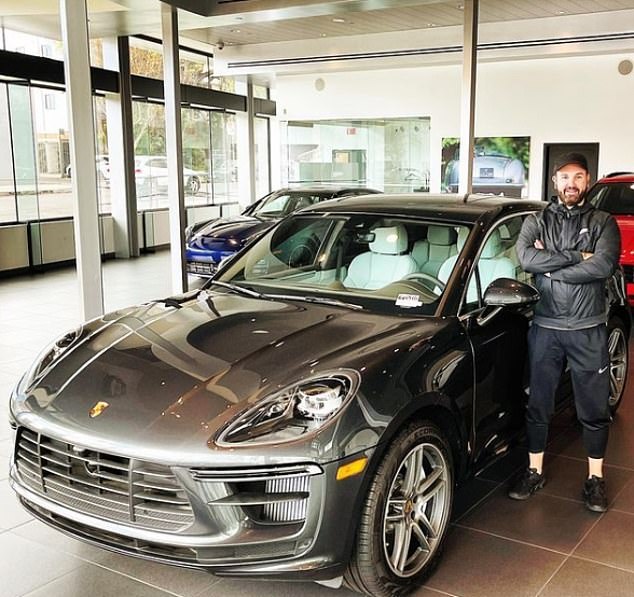 A few minutes later, they allegedly sprayed an Empire skip bin, again with ‘Roxy is a c***’, on the corner of Oatley and Renny Streets in Paddington.

The fact sheet also alleges that Hess’ mobile phone pinged towers across East Sydney and Bondi Beach, putting him in the area when the graffiti was sprayed. 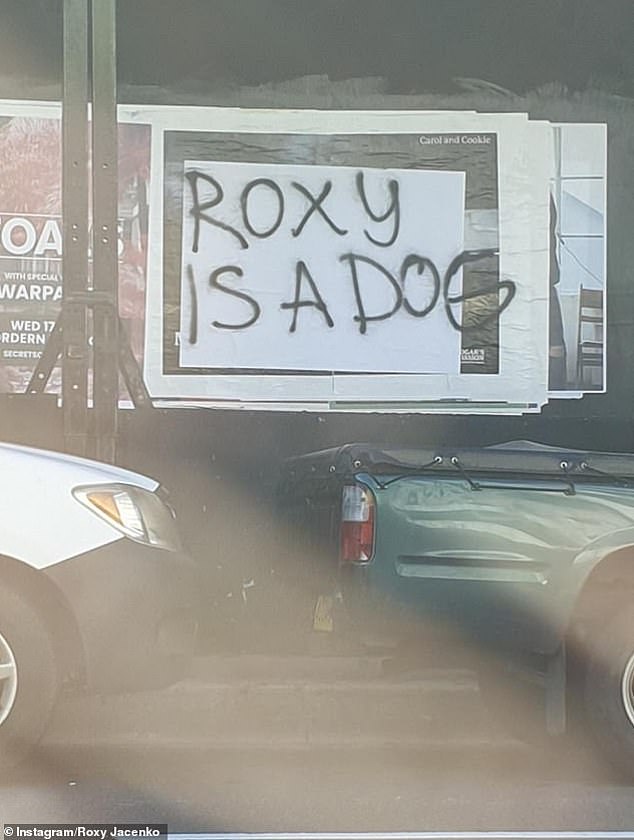 The words ‘Roxy is a dog’ were found plastered in black spraypaint on Ramsgate Avenue, North Bondi 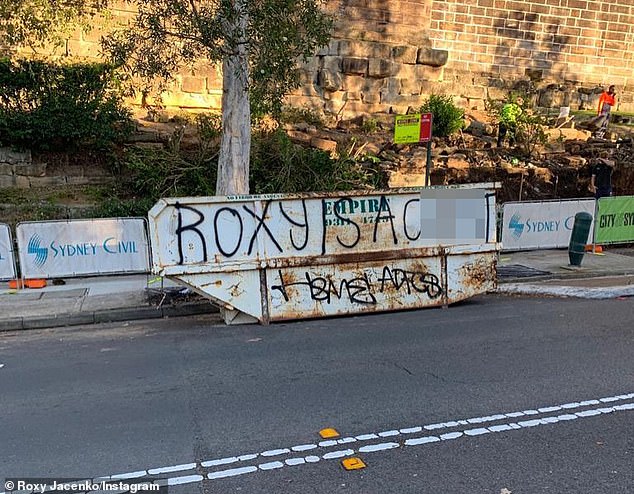 Further obscenities are seen above scrawled on a skip bin

Hess claimed to Daily Mail Australia last week that he didn’t remember the night in question and was ‘living it up’ in Los Angeles driving an expensive Porsche.

Lister’s lawyer Brian Wrench said the graffiti was too crude to have been sprayed by the renowned artist.

‘This is certainly not a Lister [work] and our client shouldn’t be given credit for this attempt at artwork,’ he said.

Ms Jacenko claimed in court last year that the whole saga began when Hess abused her at an event, beginning a campaign of harassment that left her living in fear.

Spooky Gothic mansion that resembles a haunted house could be yours for £1.25million

Rishi Sunak’s Spending Review: Four things to look out for