Anti-vax trolls target Covid-hit schoolgirl, 17, who told people to get jab from her hospital bed


A 17-year-old who urged young people to get the vaccine after she was hospitalised with complications from Covid says she has been targeted by online trolls.

Maisy Evans revealed she has been called a ‘liar’ and was accused of being an actress performing for the Government since she revealed her struggle with the virus.

The teenager, from Newport, South Wales, was rushed to The Grange University Hospital earlier this month after testing positive for Covid and is still receiving treatment.

Maisie, who has received a single Pfizer coronavirus jab, was soon diagnosed with a blood clot in her lung following numerous blood tests, X-rays and CT scans – which doctors said was Covid-related and not related to the vaccine.

The 17-year-old described how she experienced symptoms including dizziness, shortness of breath, headaches, a loss of smell and taste as well as the blood clot on her lung. 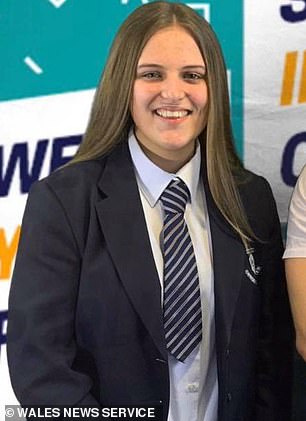 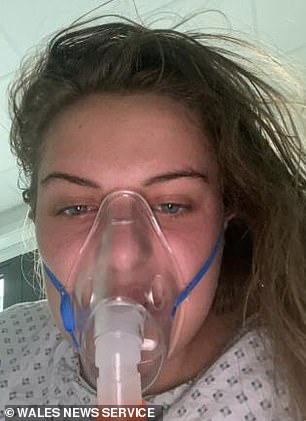 Schoolgirl Maisy Evans (left and right in hospital), 17, from Newport, South Wales, says she has been targeted by trolls online since revealing she was hospitalised with the coronavirus

After testing positive for the virus on August 14 three days after receiving the Pfizer vaccine, Maisy was admitted to hospital on August 25.

The teenager, a former member of the Welsh Youth Parliament, then revealed her battle with the virus on social media and says she was soon targeted by trolls.

She told Sky News: ‘I’ve had to deal with a lot of anti-vaxxers and conspiracy theorists which is deeply frustrating.

‘I’ve been called a liar, an actress paid by the government to push certain agendas, Satan, a Nazi, evil, and so many more things.

Maisy is still being treated in hospital and says the virus has left her struggling to stand and that it feels like she has run 40 miles.

She told Sky News she thought she was going to die when her oxygen level ‘dropped dramatically’ and said it now takes her an hour to have a shower.

Ms Evans said: ‘I’ve probably had every possible symptom. I’ve had the cough, the high temperature, the shakes, the sickness, the dizziness, the shortness of breath, the excruciating headaches, the body aches.

‘You name a symptom – it’s hit me. I even lost my sense of smell and taste. The breathlessness was one of the last symptoms to develop.’

After she was hospitalised Ms Evans, who also spent several days on oxygen support, urged more people to get vaccinated.

She said: ‘This virus is not a joke for young people and those eligible must get vaccinated. Rest assured, I’m on the long road to recovery!’ 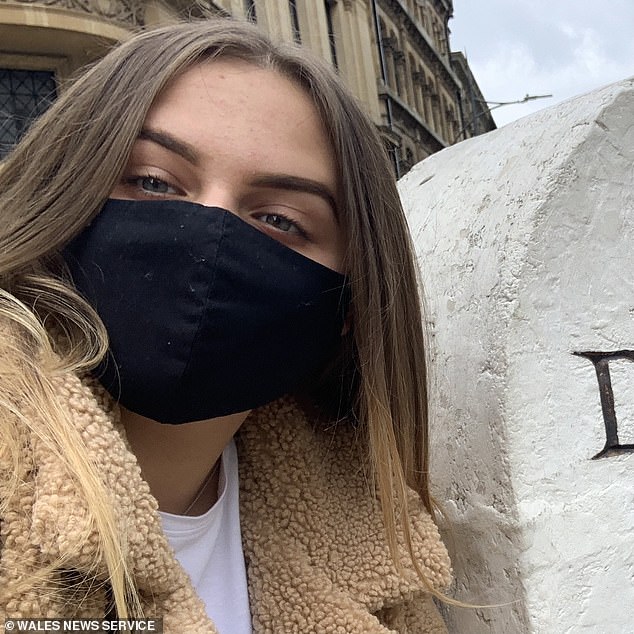 Maisy, an ex member of the Welsh Youth Parliament, urged other teens to take virus seriously

‘Please continue to take this virus seriously, even if you consider yourself generally fit and well like myself.

‘I’m expecting to stay a couple more nights because at the moment I’m unable to regulate my own oxygen levels.’

Ms Evans, who initially feared she had meningitis or sepsis, has also thanked the NHS staff on her ward for her care and for ‘treating her so well’.

She added: ‘I’d like to take a moment to thank the fantastic staff at The Grange University Hospital for treating me so well!

‘It’s a pill almost as hard to swallow as the enormous amoxicillin ones, but I don’t think I’d be here without the staff on this ward.’

It comes as the latest data showed more than 1,000 Covid patients were admitted to hospital in a single day in the UK last week for the first time since February. 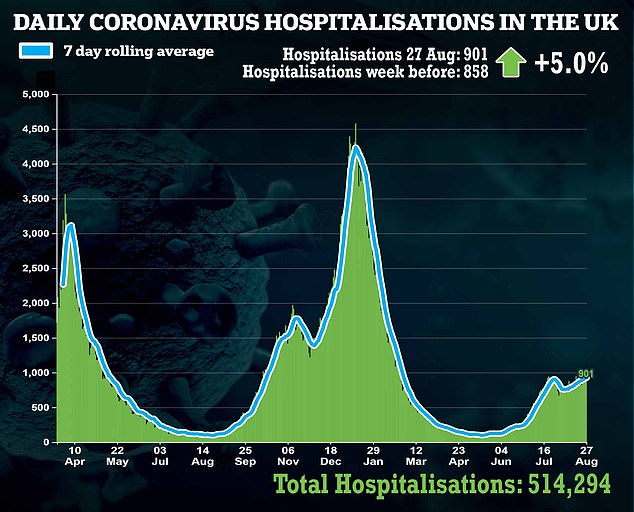 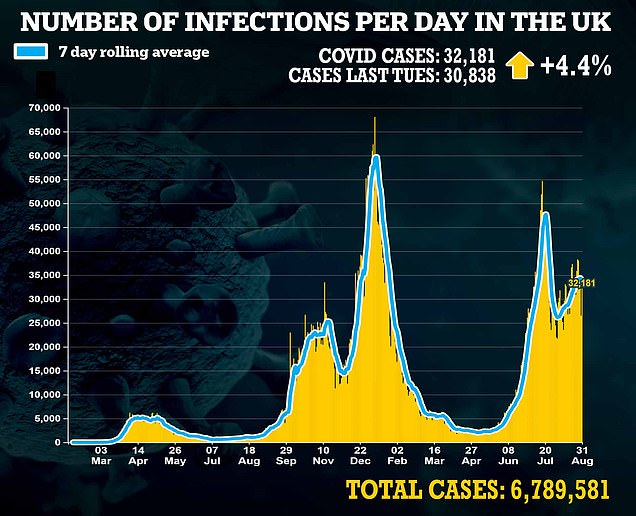 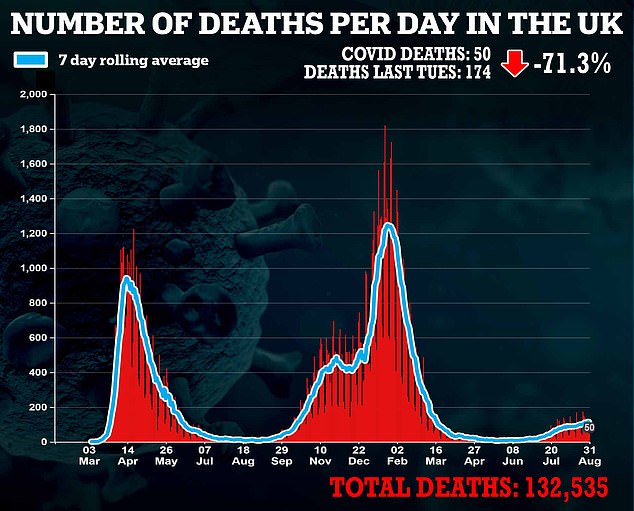 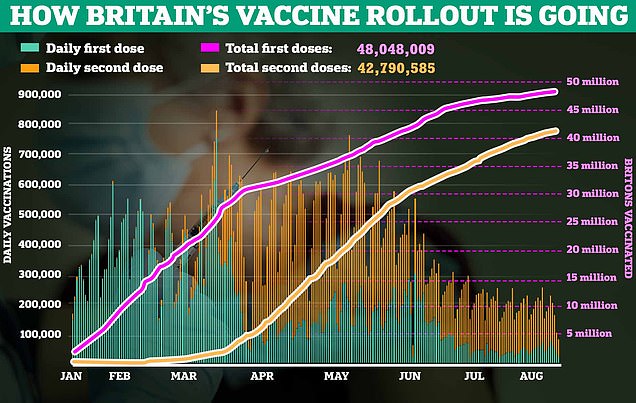 In its usual daily update, the Department of Health and Social Care revealed that 1,019 people were hospitalised with the virus across the UK on August 25.

It marks the first time there have been four-figure Covid admissions since February 24 when the second wave was being brought under control and the jab rollout was just gaining momentum.

Meanwhile, there was a mixed picture as UK-wide infections increased by 4 per cent in a week to 32,181 but England’s case numbers fell again, this time by 10 per cent.

Infection spikes in Scotland — attributed to schools going back in mid-August — and Northern Ireland, where vaccine uptake has been slightly lower than the rest of the UK, will be playing a role.

But there are fears England and Wales could see cases trend upwards again when classes go back this week and next, which has reignited the debate about jabbing children.

The return of the stray dog.. It crosses 380 km from Italy to southern France and returns to its home.. I know the story