Alexandria Ocasio-Cortez has given a ‘shout out’ to her ‘fellow radicals’ on Instagram this week, calling for an ‘advanced society’ while preparing salmon pasta from Whole Foods in a $58 shirt she sells on her webstore.

Ocasio-Cortez, 31, hosted an Instagram Live to update people on progress of a second COVID relief bill.

She complained about ‘the system’ of which she is part, and criticized ‘huge conglomerate employers sending you in harm’s way and being completely immune from any accountability for it.’

And she railed against a system which left workers ‘under the thumb of a $7 minimum wage’.

The congresswoman, who won reelection last month, wore a sweatshirt with the slogan ‘tax the rich’ for the video – a week after it emerged she was selling the garment for $58 on her webstore.

AOC, who enjoys a six-figure congressional income, had been slammed for the hefty price tag, with some saying it would only actually be affordable by the rich.

She hit back last week, arguing the cost is justified because ‘we don’t use slave-wage labor’.

The Democratic socialist, 31, defended the now sold out sweater and took a swipe at Donald Trump and his supporters saying the difference between her merchandise and his MAGA gear is that ‘ours is made in the US’. 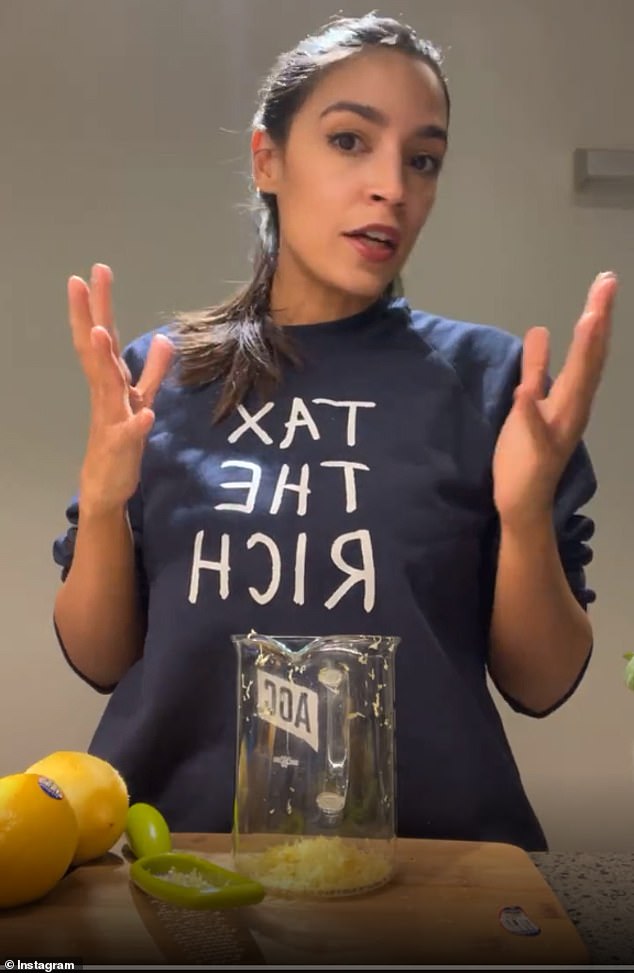 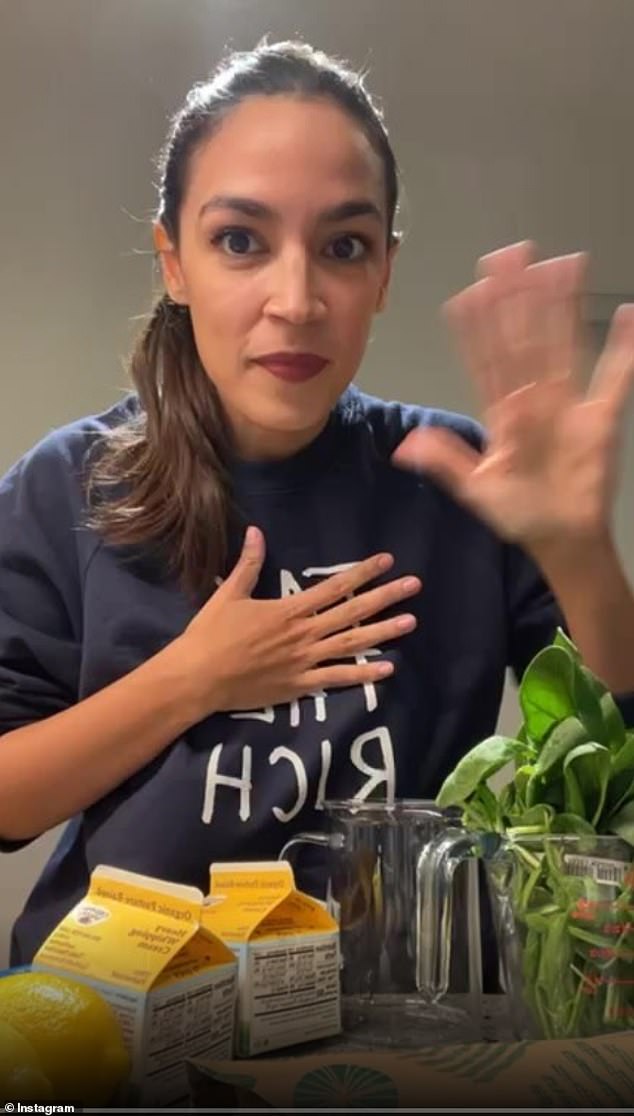 At the end of one hour of ‘cooking salmon pasta’, the fish was still in its Whole Foods package

But social media users pointed out the irony of calling for higher taxes for the rich while flogging a sweater many people on lower incomes cannot afford.

Author and podcaster Ben Shapiro wrote: ‘Only the rich can afford this idiotic sweatshirt.’

Others noted the pricey piece was the ‘most AOC thing ever’ and said they ‘couldn’t afford’ the clothing.

Reporter Mary Margaret Olohan tweteed: ‘Hey AOC I can’t afford this sweatshirt [right now], you got a coupon code for the non-rich?’

Opinion writer Eddie Zipperer said: ‘Selling a $58 sweatshirt to own the capitalists is the most AOC thing ever.’

Other items for sale on the site include a t-shirt with the slogan ‘Drink water & don’t be racist’, retailing for $27, and a $28 cap with ‘abolish ICE’ on it.

Proceeds from the merch goes to AOC’s campaign.

AOC did not appear to address the controversy in her new video, focusing on the  COVID relief which has still not been agreed on by Congress.

A key sticking point of the bill is whether companies can be held liable if their staff contract COVID at work.

Republicans and Democrats are tantalizingly close to an agreement, but not there yet.

It remains unclear what kind of package could be supported by both the Republican-controlled Senate and Democratic-held House.

The Bronx congresswoman, who by the end of her hour-long video had not even unwrapped her Whole Foods salmon or begun chopping ingredients, expressed her frustration at Republican objections to the bill, and dismissed their objections that it was too expensive. 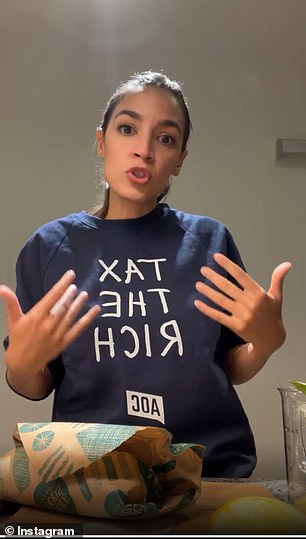 AOC spoke about the minimum wage and corporate responsibility

‘A $770 billion defense bill, but COVID checks, rein it back. Unemployment checks? No,’ she said.

‘This really isn’t about fiscal responsibility at all.’

Ocasio-Cortez said that it was not ‘radical’ to demand healthcare and a living wage, noting: ‘When they call you radical – it’s really sad what they call radical these days. We can be an advanced society and not allow people to die in the streets.’

She added: ‘Shout out to my fellow radicals in the United States who believe crazy things like a full-time job should be enough for you to live and believe in crazy radical things like if you kill someone there shouldn’t be impunity.

‘You know, shoutout to my fellow radicals who think that we should live in a humane advanced society and that we shouldn’t be under the thumb of a $7 minimum wage and racist systems.

‘Because, I don’t know, that just benefits the people who already are in power to be in power.

‘So, you know, shoutout to my radicals.’ 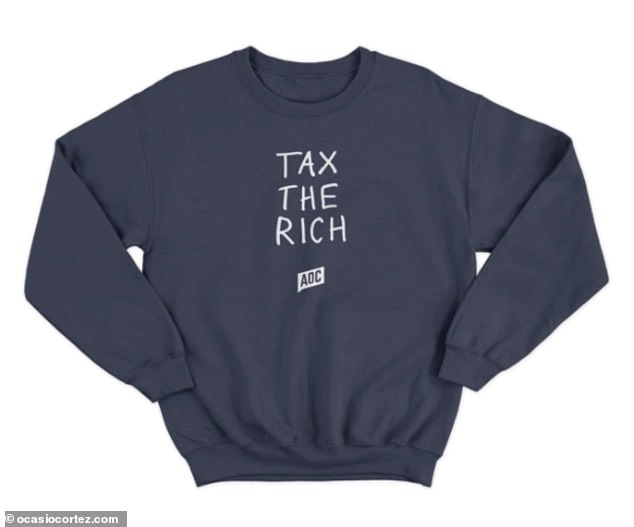 The cost of the blue sweater was noted by many online, particularity given AOC has become one of the most well-known voices of the American left

Ocasio-Cortez has faced criticism from Republicans and some Democrats who say some of her positions alienate moderates.

Barack Obama said earlier this month that the Democratic Party should embrace her and make sure that she has a platform.

‘You give her a platform, just like there may be some other young Democrats who come from more conservative areas who have a different point of view. But new blood is always good,’ he said at the time.

Ocasio-Cortez and her fellow ‘squad’ members – Ilhan Omar of Minnesota, Ayanna Pressley of Massachusetts and Rashida Tlaib of Michigan – are getting some new colleagues.

Of the 15 incoming freshmen lawmakers, eight are members of the Congressional Progressive Caucus and at least four have ties to the squad. 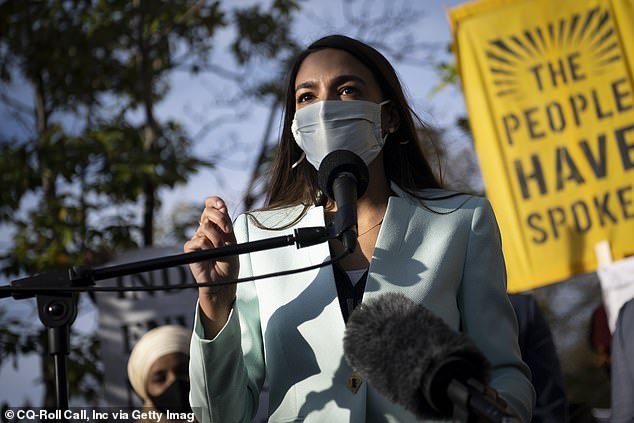 ‘These new, incredibly great leaders are reinforcements coming over the hill,’ said Ed Markey, a Democrat senator for Massachusetts and elder statesman who aligned himself with the young insurgents to overcome a primary challenge this year.

Democrats are on track to initially have as few as 220 seats in the next Congress — barely more than the 218 needed to pass bills — which could give a small groups of lawmakers leverage by threatening to block votes.

Three of the four new ‘squad’ members are, like Ocasio-Cortez, from New York.

The new members include Jamaal Bowman, an African American former school teacher and principal who defeated a 16-term Democratic incumbent and committee chairman in a Bronx-area district.

He has taken up slavery reparations as the issue he wants to try to elevate, like Ocasio Cortez did with the Green New Deal.

‘I was watching it from afar, watching Bernie Sanders run, and then watching AOC and the squad, not just win but truly come in as voices for the underserved, so to be joining them in Congress in 2021 is surreal and exciting, and I think it illustrates a shift happening in the Democratic Party,’ Bowman told NBC News.

Mondaire Jones, 33, a former Obama Justice Department lawyer from New York, challenged a longtime incumbent Democrat in a primary who decided not to seek re-election, which created the opening for a crowded primary.

Jones then went on to win the nomination in the New York City suburbs, and won general election on a platform of Medicare for All and the Green New Deal.

‘We are uniquely positioned to lead the Democratic Party into the 21st century, and I don’t think that has happened yet,’ Jones said of his fellow freshmen.

‘I don’t think that we have fully addressed as a party the unprecedented challenges that Americans now face, such as the student loan crisis.’

Finally there is Cori Bush, a nurse and racial justice activist who got involved in the protests surrounding the 2014 shooting by police of Michael Brown, a black teenager in Ferguson, Missouri.

Backed by Justice Democrats, the left-wing group that recruited Ocasio-Cortez and others, Bush defeated a 10-term incumbent in the primary and won the November election in the safe blue seat easily.

Is white Christmas on the way? Polar ice bomb looms with temperatures to plummet as low as minus 7C

Are your kids' Christmas gifts safe? Toys at risk for lead, poison after US stopped inspections amid COVID-19