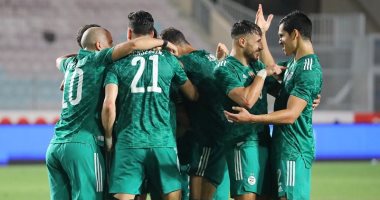 Today, Thursday, a number of strong confrontations will be held in the first round of African qualifiers for the 2022 World Cup, with 7 exciting confrontations, the most important of which is the confrontation of the Algerian national team with its counterpart Djibouti, as well as a purely Arab derby between Morocco and Sudan..

The confrontations of the second day of the African qualifiers for the World Cup Qatar 2022 will conclude with a purely Arab derby between Algeria and its guest, Djibouti, at Mustafa Chaker Stadium at nine in the evening.

At the same time, Morocco will host its Sudanese counterpart at Stade Moulay Abdallah, in the Group Nine competitions.

The confrontations begin today, Thursday, with the confrontation of Kenya against Uganda at three in the afternoon, at Nyayo Stadium, in the fifth group competitions.

At the same time, the Democratic Republic of the Congo will host its Tanzanian counterpart, TP Mazembe, in the seventh complex.

In the first group competition, Burkina Faso will host Niger at the Great Stadium, Marrakech, at six in the evening.

At the same time, Namibia will play its guest, Congo, at Orlando Stadium in the Group H match.

Madagascar will start its qualifying campaign against Benin at Mahamasina Stadium at six in the evening.

The 2022 World Cup qualifiers in the African continent consist of 3 rounds, the first in which the 28 lowest ranked teams participate, and it consists of two home and away matches between each two teams, and the loser is deposited.

The third round is a knockout round like the first round, where every other team faces home and away and the winner qualifies for the 2022 World Cup..

4 foods that make you lazy and sluggish.. French fries are the most prominent