Archbishop of Canterbury tells elderly to avoid church at Christmas

The Archbishop of Canterbury Justin Welby today told the elderly not to go to church on Christmas Day as he warned it is ‘too dangerous’.

Places of worship will remain open across the nation over the festive period, even in Tier 4 areas of England which are subject to the toughest coronavirus restrictions.

But Mr Welby this morning urged the elderly to be ‘sensible’ and not to feel there is a ‘compulsion’ to attend church services.

He said people should instead try to ‘get out, get some fresh air’ and to ‘look at something on the television’, focusing on what they can do, rather than on what they cannot. 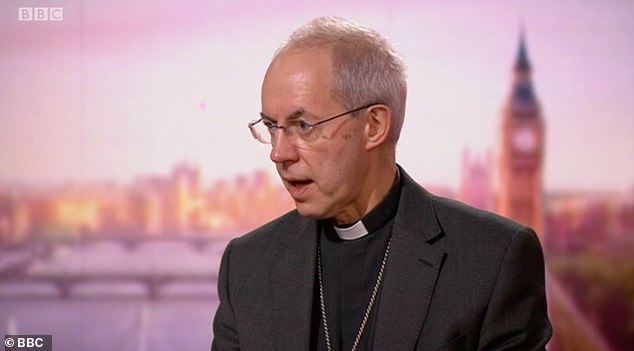 Mr Welby was asked on the BBC’s Andrew Marr Show what his advice would be to an 80-year-old who wants to go to church on Christmas Day.

He replied: ‘I would say that you know much better than I do what you should do.

‘Don’t feel under compulsion, do what is sensible.

‘My mother who is in her nineties will not go to church, I am sure, because it is too dangerous.

‘There are clergy who have underlying health conditions who will not go to church.

‘I will be in church, God willing, and for your 80-year-old I would say get out, get some fresh air if you can, if you are fit enough to walk.

‘But talk to people, look at something on the television. Ring up the hope line, you can find out the number for that, which is services and prayers and carols especially and talks for Christmas.

When it was suggested to Mr Welby that if people do go to church they should stay away from the choir, he said: ‘The choir always make me keep away from them because my voice is so bad.

‘But yes, keep away from the choir and above all, to quote the Dean of Canterbury, don’t mingle after the service, wave happily to people and go.’

Boris Johnson yesterday announced London, the South East and the East of England were being moved into a new Tier 4 from today to combat the spread of a new variant of the disease.

The variant spreads more quickly than its predecessor and Health Secretary Matt Hancock today warned it is ‘out of control’ in Tier 4 areas.

Under the new Tier 4 rules non-essential shops – as well as gyms, cinemas, casinos and hairdressers – have to stay shut and people are limited to meeting one other person from another household in an outdoor public space.

People in Tier 4 have also been told they should not travel out of the region, while those outside were advised against visiting.

In the rest of England, Christmas easing has been severely curtailed, with households allowed to gather for just one day – Christmas Day itself – rather than the five days previously planned.

Despite the crackdown, communal worship is permitted in Tier 4, but people should not mingle with anyone outside their household or bubble.

Putin: The dangers of raging conflicts near Russia require more protection for our borders