INVESTING SHOW: Are ‘cheap’ bank shares an opportunity to profit or a value trap?

But that was a rare bit of sunshine in an overwhelmingly gloomy year for the millions of UK investors who hold Lloyds shares.

Despite the fact that Lloyds shares pack a dividend yield of 6.2 per cent, trade on a lowly forward price-to-earnings ratio of 7, and can be bought for less than they are worth, with a price-to-book value of 0.8, they are deeply unloved.

Even after today’s bounce, Lloyds shares are down about 20 per cent on where they stood before the Brexit vote and a third below there 2015 peak.

While Lloyds is considered the most UK economy-focused of Britain’s big banks, its rival big names are out of favour too, with HSBC, Barclays and RBS all firmly off investors’ wish lists.

Britain’s banks should be doing well at this point in the economic cycle, but are instead suffering from a double hangover, induced first by the financial crisis and then Brexit.

So, is this a chance to profit, or a value trap for investors? Simon Lambert, of This is Money, and Richard Hunter, of Interactive Investor, take a look. 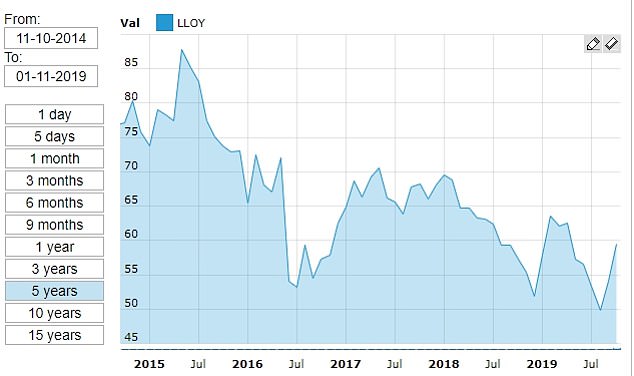 Lloyds shares have slid over the past five years, with the Brexit vote seriously denting investors’ appetite for the bank

New Hampshire man, 30, ‘killed wife’s lover, 25, before forcing her to decapitate him’