Are Covid-19 outbreaks slowing down in university towns? Analysis

Half of England’s major university towns are already coming out of the other side of their coronavirus outbreaks, analysis of official data suggests.

Major university towns, defined as having more than 20,000 students but excluding London, saw infections skyrocket at the end of September when students and teachers returned to education in their droves.

The arrival and mingling of thousands of strangers from different parts of the country is thought to have exacerbated the virus’ spread in these areas and helped the disease migrate into the wider community.

But the average number of cases being recorded each day is now declining in nine of the 18 largest university towns, according to analysis of figures from Public Health England. The promising statistics show the six areas where the virus surged the most at the start of the new term – Manchester, Newcastle, Liverpool, Nottingham, Leeds and Sheffield – are all reporting fewer infections than a week ago. And in the university towns where cases are still on the up, the rate at which they are increasing has began to decelerate.

The rolling seven-day average number of daily cases in Newcastle – where university students make up almost a fifth of the city’s 270,000-strong population – is currently 150.7, according to figures up to October 12, the most recent snapshot. This was down by a third from the 236 daily infections reported the week before.

The rolling seven-day average is considered the most accurate way to assess outbreaks because it takes into account day-to-day fluctuations in infections. Nottingham – the country’s current Covid-19 hotspot – saw average daily cases fall by almost 30 per cent in the same period – from 476.1 to 338.3.

In Manchester – which is poised to be plunged into a ‘Tier Three’ lockdown later today – the rolling seven-day average number of cases has been falling since September 28. On that date, the city was recording 419 cases a day, but this has since fallen to 335.4. The downward trend will raise doubts about whether the harshest lockdown bracket is really justified.

Sheffield and Leeds, two other hotspots where local leaders are in crunch talks with Government about tightening Covid-19 restrictions, have seen cases steadily fall for a week, suggesting a downwards trend rather than a blip. Sheffield saw its average daily cases tumble from 414.4 on October 5 to 328.7 by October 12, while Leeds’ daily cases fell from 483.6 to 419 in the same time period.

Exeter – which ducked tougher lockdown restrictions because officials ruled outbreaks there were confined to student halls of residence – saw one of the most dramatic drops in daily cases in the week up to October 12, with infections nearly halving from 77.9 to 41.9.

The rolling seven-day average number of daily cases in Newcastle – where university students make up almost a fifth of the city’s 270,000-strong population – is currently 150.7, according to figures up to October 12, the most recent snapshot. This was down by a third from the 236 daily infections reported the week before 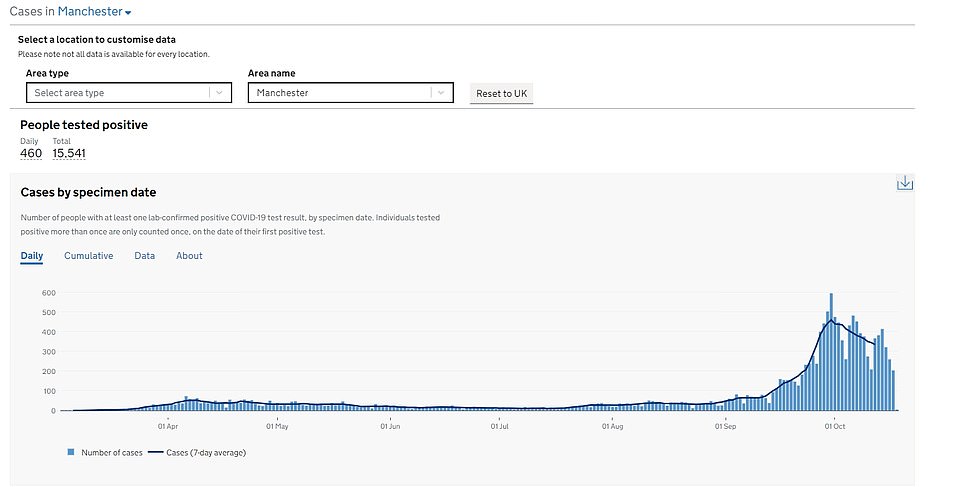 In Manchester – which is poised to be plunged into a ‘Tier Three’ lockdown later today – the rolling seven-day average number of cases has been falling since September 28. On that date, the city was recording 419 cases a day, but this has since fallen to 335.4. The downward trend will raise doubts about whether the harshest lockdown bracket is really justified

Sheffield saw its average daily cases drop from 414.4 on October 5 to 328.7 by October 12. Cases have been falling steadily for a week, suggesting a downwards trend rather than a blip

Leeds’ daily cases fell from 483.6 to 419 in the same time period. Local leaders in Leeds are in crunch talks with Government about tightening Covid-19 restrictions

HOW HAS THE ROLLING SEVEN-DAY AVERAGE NUMBER OF CASES CHANGED WEEK-ON-WEEK IN MAJOR UNIVERSITY TOWNS?

Note: The figures are available on the Government’s coronavirus dashboard. They are based on specimen date, which is how many coronavirus samples taken on that day came back as positive. Specimen date figures lag by around five days because of a delay in analysing tests.

Bristol is one of the major university towns that has seen cases continue to climb in the last week, but the its rate is still far below those seen in other hotspots. The city saw average daily cases shoot up from 78 on October 5 to 136.6 on October 12.

Birmingham is also recording a high number of cases, but its daily cases have only risen by 13 per cent in the last week –  from 301 to 343 – compared to 25 per cent the week before, suggesting the outbreak there is slowing down.

Salford is the only other major university town to see an increase, although the week-on-week rise was only 9 per cent.

More than 22,000 students across England have tested positive for Covid-19 since the start of the new term, according to a report by the University and College Union.

Thousands more have had to self-isolate in student accommodation and more and more lectures are moving online to reduce face-to-face contact.

The figures suggest the rapid spread of Covid-19 among areas with a high density of student accommodation appears to have halted.

By contrast the places in England recording the biggest growth in case rates are no longer big cities but a mixture of towns and suburbs.

The largely rural borough of Charnwood in Leicestershire, which includes the town of Loughborough – home of Loughborough University – has seen its rate rise from 153.9 to 288.9.

Overall the numbers suggest the geographical hotspots for Covid-19 in England may have tilted away from big cities and towards built-up areas that do not necessarily have densely-housed student populations – and that the virus is now being spread increasingly through community infections rather than circulating largely within student accommodation.

The finding that many of the big cities and university towns appear past the peak of the virus is being used as ammunition by local leaders and MPs trying to fight off ‘Tier Three’ lockdowns.

Greater Manchester was given until noon today to strike a deal with the Government after a week of bitter wrangling over the ins and outs of a compensation package planned to lessen the blow of harsh lockdown restrictions.

Mayor Andy Burnham conceded he will have to fall into line if the government imposes Tier Three lockdown on Greater Manchester after the ‘high noon’ deadline for a deal passed earlier today. The Government is thought to be offering the area up to £100million in compensation.

Mr Burnham said he would spend the rest of the day trying to haggle with the ‘penny pinching’ Government for a better deal, but admitted he would make sure the people of Manchester obey the law if the strict lockdown curbs are imposed without one.

Mr Burnham also swiped at ‘selective’ figures highlighted by Downing Street that suggested Greater Manchester hospitals could be overwhelmed within weeks unless tougher action is taken. He insisted intensive care bed occupancy was about normal for this time of year, at 80 per cent.

The high-stakes brinkmanship came as a swathe of the country faces being escalated into the highest lockdown bracket, which means shutting pubs and restaurants as well as a ban on households mixing indoors. Mr Johnson gathered his Cabinet this morning for talks on the raging crisis.

In a round of interviews this morning, Mr Burnham criticised the late-night statement from Local Government Secretary Robert Jenrick laying down the noon ultimatum.

The mayor – who has been demanding support equivalent to the 80 per cent wages furlough scheme for those hit by the lockdown – claimed Greater Manchester leaders had ‘never been given a figure’ for how much funding they would get. And he said they must have carte blanche on how the money is spent.

‘What I’ll be proposing to the Greater Manchester leaders when we meet this morning, quite early, is that we write to the Government setting out what we think a fair figure is for that support, given we’ve been under restrictions for three months and that has taken a real toll on people and businesses here,’ Mr Burnham said.

‘The second thing we would need is full flexibility to support the people that we think are going to need to be supported in a Tier 3 lockdown.’

Mr Burnham said: ‘I don’t think the government should be enforcing or dictating in this way. We need to work together as a country and I have been offering to work with the government all year.

‘Greater Manchester needs to establish a fair financial framework for Tier Three, because there is a chance all parts of England will come under Tier Three at some point over the winter and if the terms aren’t right we are going to see real damage to people’s lives right across the country.

‘This is an issue for everyone and is not just about taking a stand for Greater Manchester.’