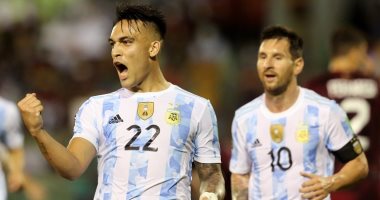 The Argentine national team won a valuable victory over its host Venezuela, by three goals against one goal, in the match that brought them together in the early hours of Friday morning, at the Olympic Stadium in the capital, Caracas, as part of the ninth round of South American qualifiers for the 2022 World Cup.

Argentina ended the first half superior to a goal scored by Lautaro Martinez, Inter Milan star, in the second minute of stoppage time.

Venezuela defender Luis Martinez was subjected to a direct expulsion in the 32nd minute, after violently entering the Argentine star Lionel Messi.

In the second half, Inter Milan striker Joaquin Correa added the second goal of the Tango team in the 71st minute, with a powerful shot to the right of the Venezuela goalkeeper.

Atletico Madrid striker Angel Correa concluded the Argentina hat-trick in the 74th minute, after following a rebound from the opposing team’s goalkeeper.

Jefferson Sutildo scored Venezuela’s only goal in the fourth minute of stoppage time for the match through a penalty kick.

Argentina returned to the runner-up of the South American qualifiers for the 2022 World Cup in Qatar, with 15 points, behind Brazil, the leader with 18 points.

Signs in the nails that indicate a lack of vitamins in the body .. White spots and bumps