A father-daughter duo armed with AR-15s joined the crowds of protestors yesterday marching outside the Kenosha County Courthouse against the Kyle Rittenhouse decision.

Dozens of people took to the streets in Wisconsin to protest against the decision to acquit Rittenhouse, 18, on all charges, two counts of homicide, one count of attempted homicide for wounding a third man, and two counts of recklessly endangering safety, after he killed two white men and injured a third last August during BLM protests – arguing he did so in self-defense.

The verdict was delivered at the Kenosha courthouse on Friday following four days of deliberations by the jury – with Rittenhouse seen shake as he fought back tears.

The demonstration was just one of multiple to take place across the US over the weekend, with the police in Portland being forced to declare a riot after about 200 protestors turned destructive, while looting broke out in Chicago and hundreds gathered outside the Barclays Center in Brooklyn, New York City, to demonstrate.

And in response to the verdict – which has divided the nation – angry demonstrators, some visibly armed with guns took to the streets in Kenosha on Sunday outside the County Courthouse to express their own fury.

Joining the crowds were Erick Jordan, 50, and his daughter Jade, 16, who said they were patrolling the demonstration, of around 75 people, with weapons to protect the protestors. 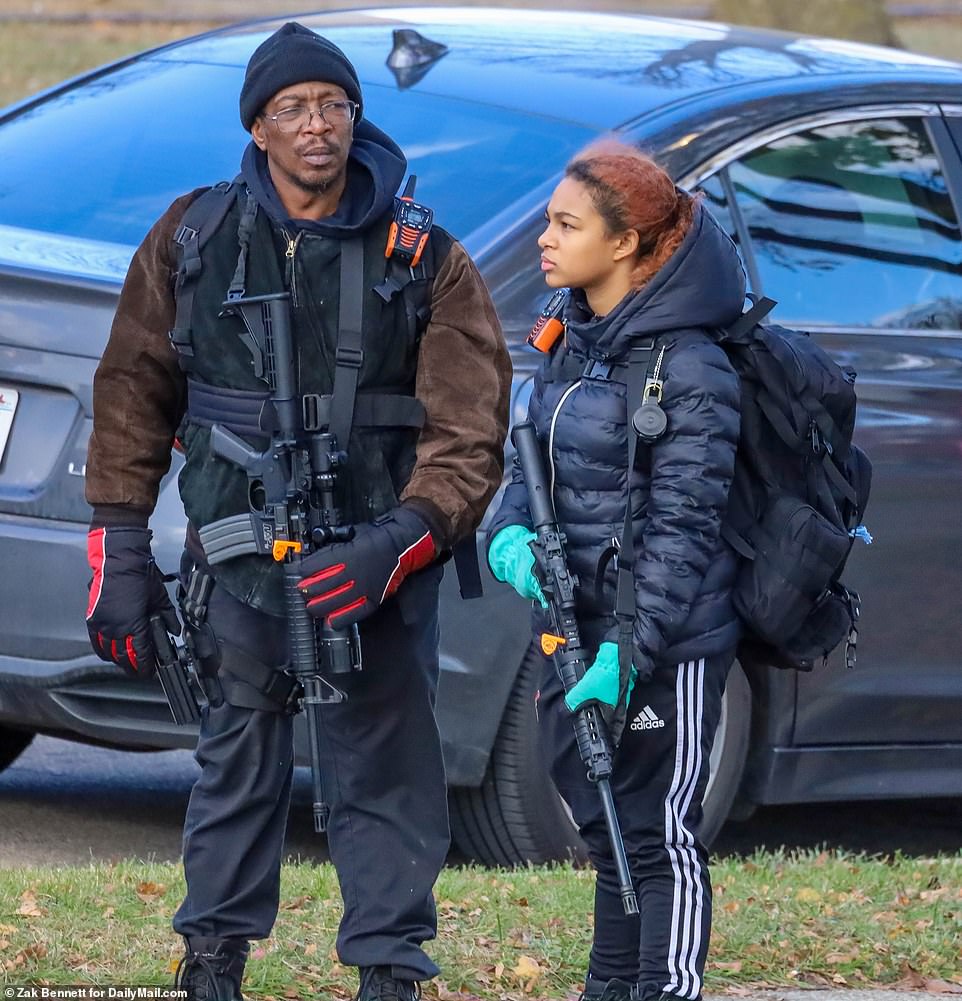 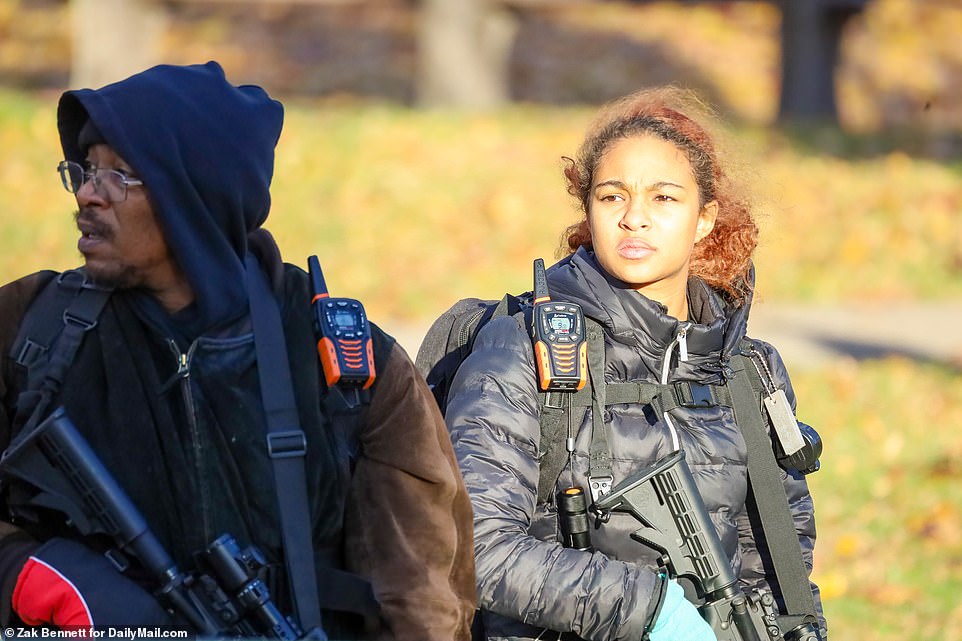 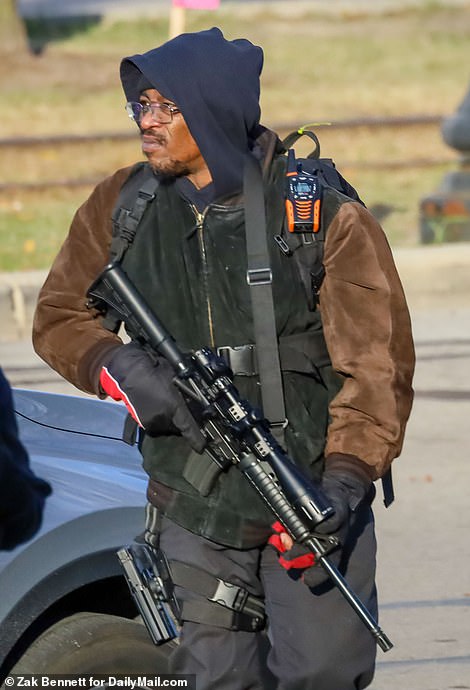 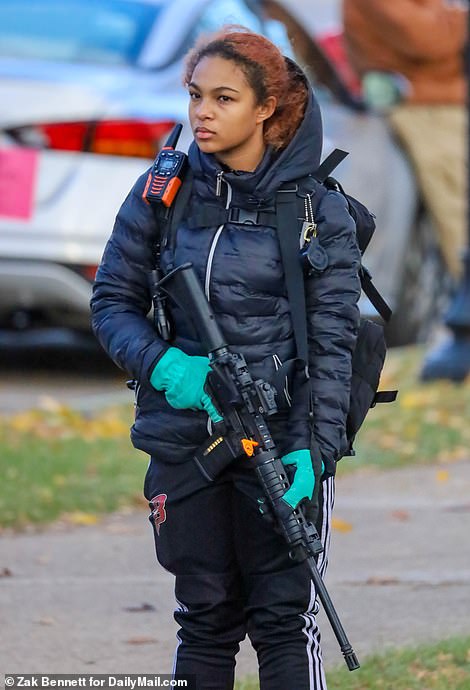 Equipped with radios, gloves, backpacks and their weapons, Erick and Jade joined a number of other protestors who flashed weapons at the rally in Kenosha

Speaking to the NY Post, Jordan said: ‘We just do security for different groups. We’re doing a favor for them.’

He went on to explain that he and his daughter had been invited by those who had organised the march – which saw some people carrying signs which read ‘the whole system is guilty’ and ‘cops and fascists give license to kill in the USA!’.

The 50-year-old said that he had trained daughter Jade to use firearms from the age of four, but that he had only allowed her to touch a weapon when she reached 14.

The pair said that they had been protecting a restaurant and two parking lots in the area on the night that the Rittenhouse shootings took place.

And commenting on the incident, Jade said she ‘probably wouldn’t have fired my weapon’. 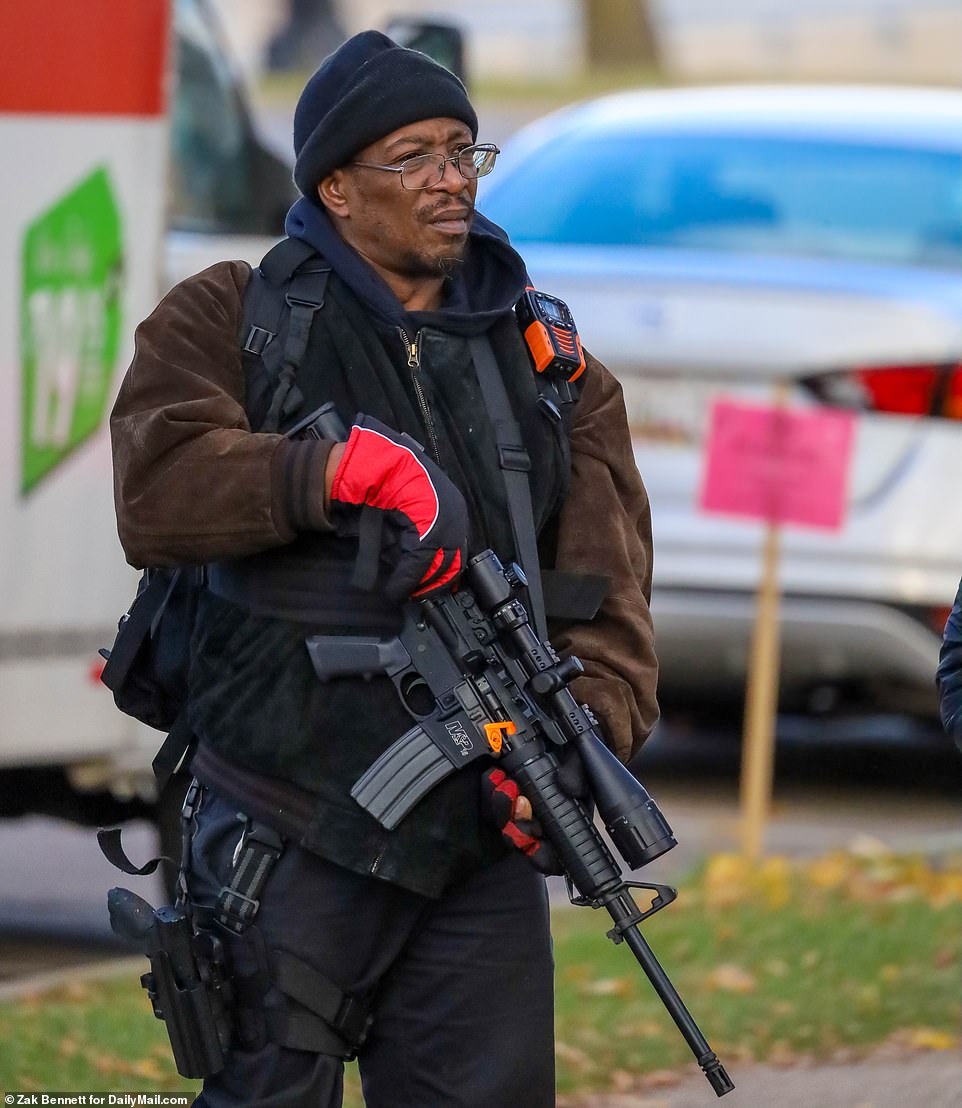 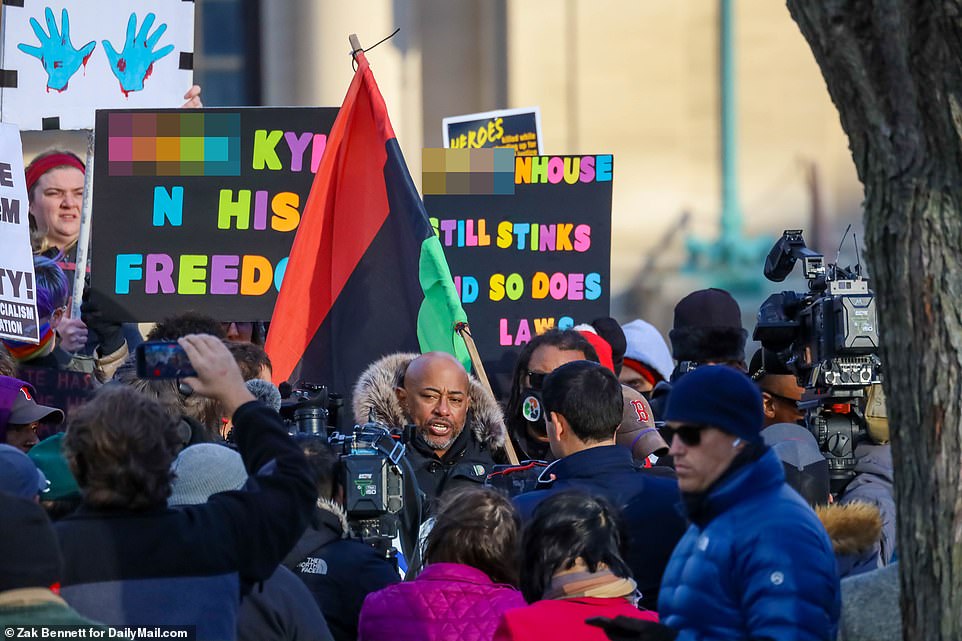 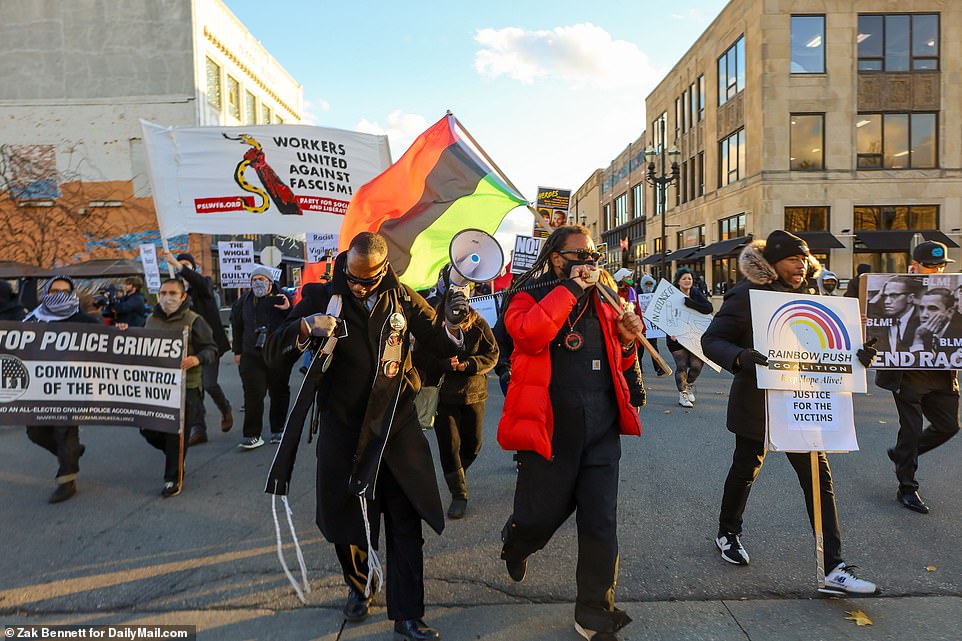 Justin Blake, the uncle of Jacob Blake – who was shot in August 2020, sparking widespread protests in the US and led to Rittenhouse shooting three people – is seen leading protestors in Kenosha yesterday 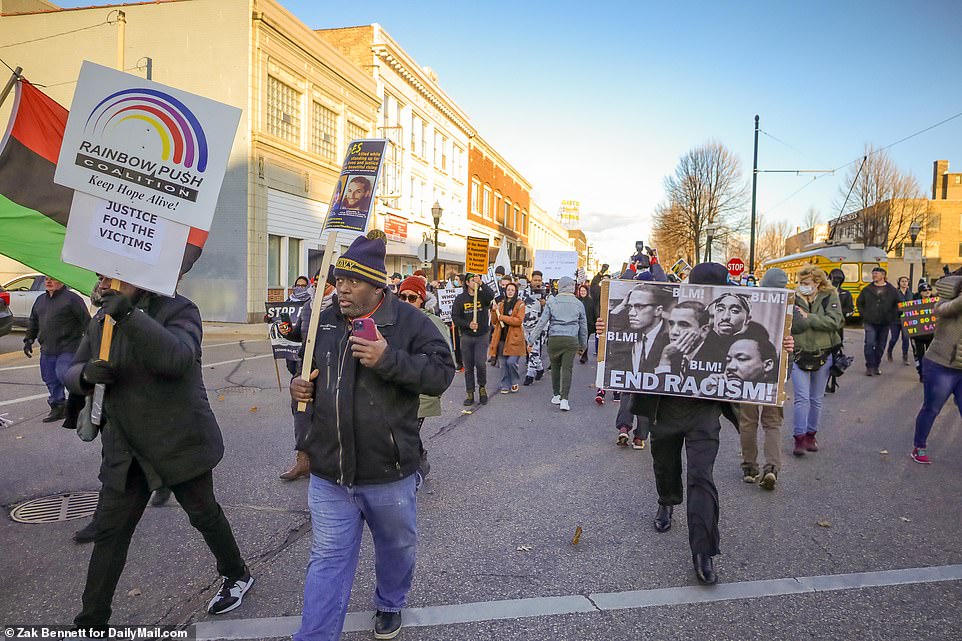 But the Jordans weren’t the only armed civilians patrolled the streets near the Wisconsin courthouse with guns in plain view.

Across much of the nation, it has become increasingly acceptable for Americans to walk the streets with firearms, either carried openly or legally concealed. In places that still forbid such behavior, prohibitions on possessing guns in public could soon change if the U.S. Supreme Court strikes down a New York law.

The new status quo for firearms outside the home was on prominent display last week in Kenosha, Wisconsin. Local resident Erick Jordan carried a rifle and holstered handgun near the courthouse where Rittenhouse was tried for killing two men and wounding a third with an AR-15-style semiautomatic rifle during a protest last year.

‘I got a job to do – protect these people. That´s it,’ said Jordan, referring to speakers at a news conference that was held in the hours after the verdict.

Speakers included an uncle of Jacob Blake, the Black man who was paralyzed in a shooting by a white police officer that touched off tumultuous protests across the city in the summer of 2020.

‘This is my town, my people,’ Jordan said. ‘We don´t agree on a lot of things, but we fight, we argue, we agree to disagree and go home safe, alive.’

The comments were a counter punch to political figures on the right who welcomed the Rittenhouse verdict and condemned his prosecution.

Mark McCloskey, who pleaded guilty in June to misdemeanor charges stemming from when he and his wife waved a rifle and a handgun at Black Lives Matter protesters outside their St. Louis home in 2020, said the verdict shows that people have a right to defend themselves from a ‘mob.’ He currently is a Republican candidate for U.S. Senate in Missouri.

The verdict arrived as many states are expanding self-defense laws and loosening the rules for carrying guns in public. Both gun sales and gun violence have been on the rise.

At the same time, six more states this year removed requirements to get a permit to carry guns in public, the largest number in any single year, according to the Giffords Law Center to Prevent Gun Violence. In all, 30 states have enacted ‘stand your ground’ laws, which remove a requirement to retreat from confrontations before using deadly force. 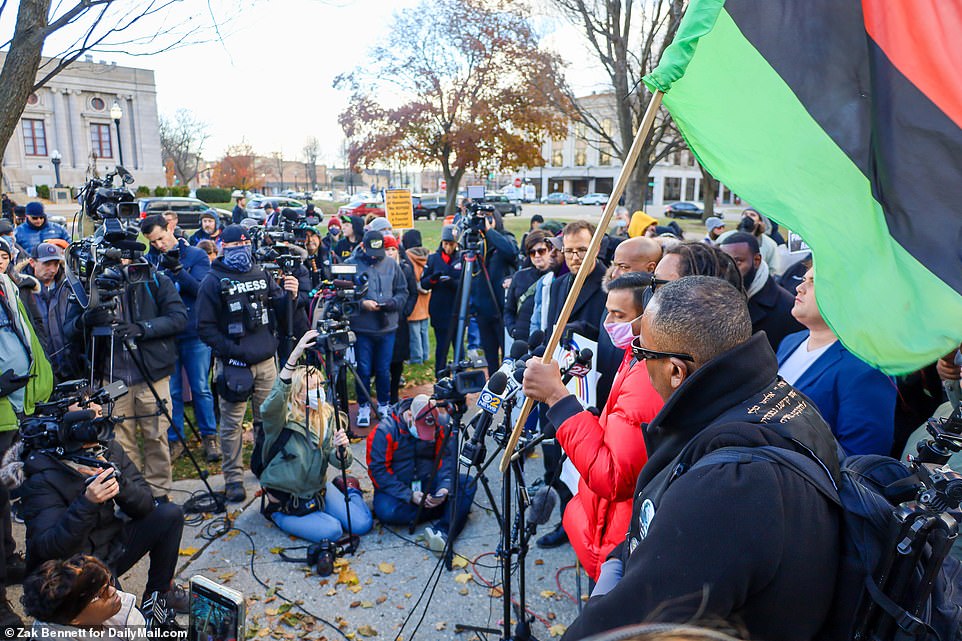 As many as 75 people were estimated to have gathered outside the Kenosha courthouse yesterday, with some giving speeches and waving banners in the air 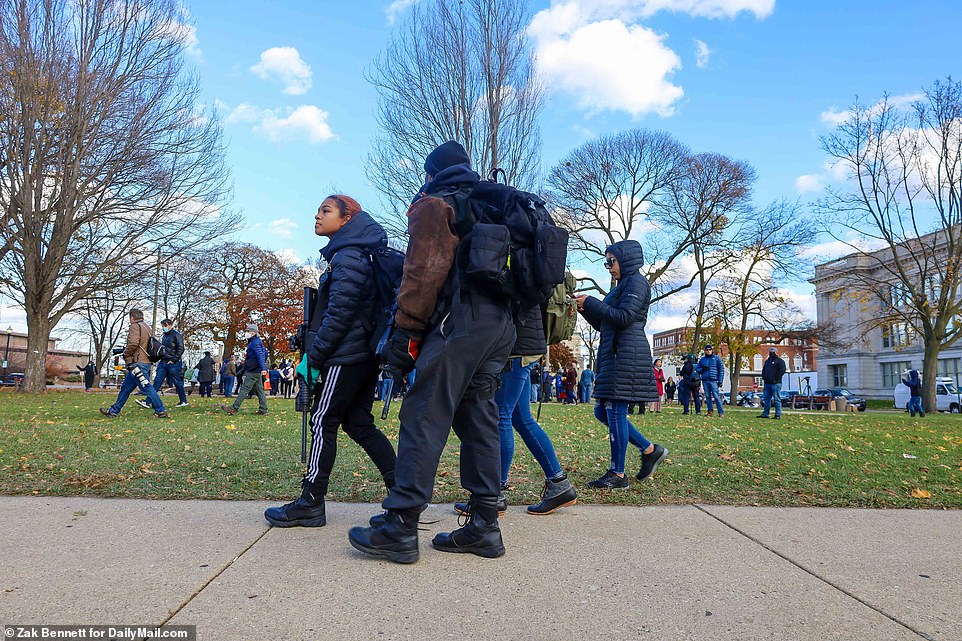 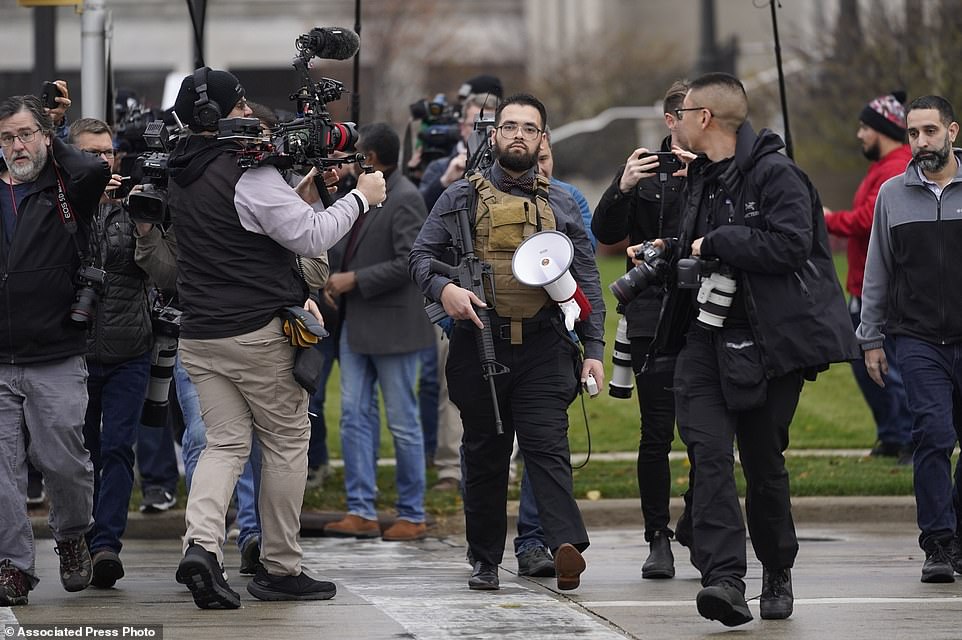 The Jordans weren’t the only members of the public who arrived at the rally with weapons though, with this man also seen with a rifle slung over his shoulder 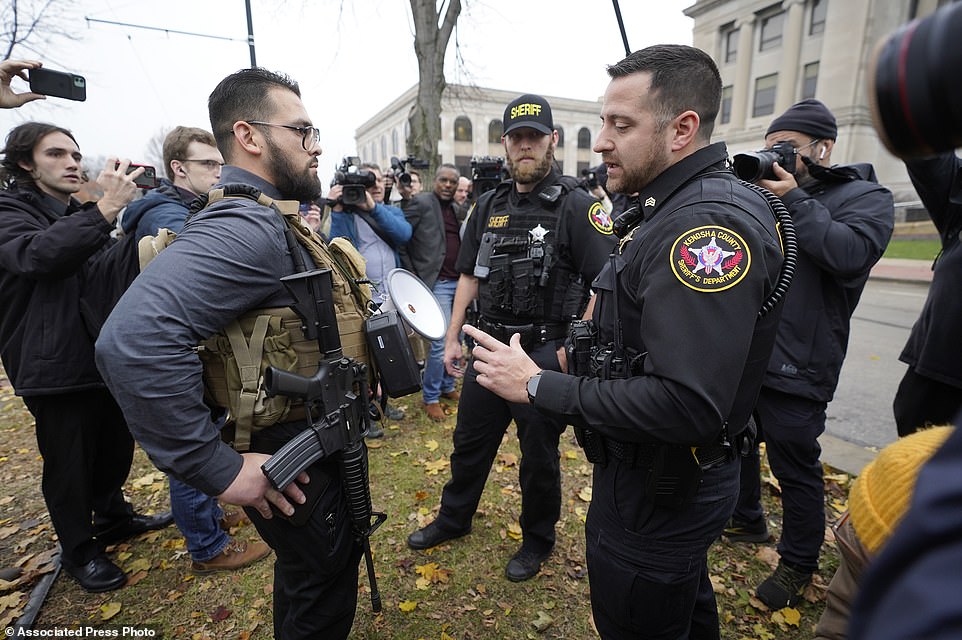 Wisconsin has a tougher standard for claiming self-defense, and Rittenhouse was able to show the jury that he reasonably believed his life was in danger and that the amount of force he used was appropriate.

Ryan Busse, a former firearms-industry executive who now supports moderate gun control as an author and consultant, said the case reinforced the normalization of military-style weapons on city and suburban streets.

‘Reasonable gun owners are freaked out by this,’ he said. ‘How is it that we see this and people are just like, `There’s a guy with an AR-15. That happens in third-world countries.’

He highlighted that a lesser charge against Rittenhouse as a minor in possession of a dangerous weapon was dropped before the verdict.

‘There´s a facet of Wisconsin law that allows kids to take their hunting rifle out with their dad or uncle,’ Busse said. ‘Well he´s not hunting. … The old gun culture is being used to cover up for this new, dangerous firearms culture.’ 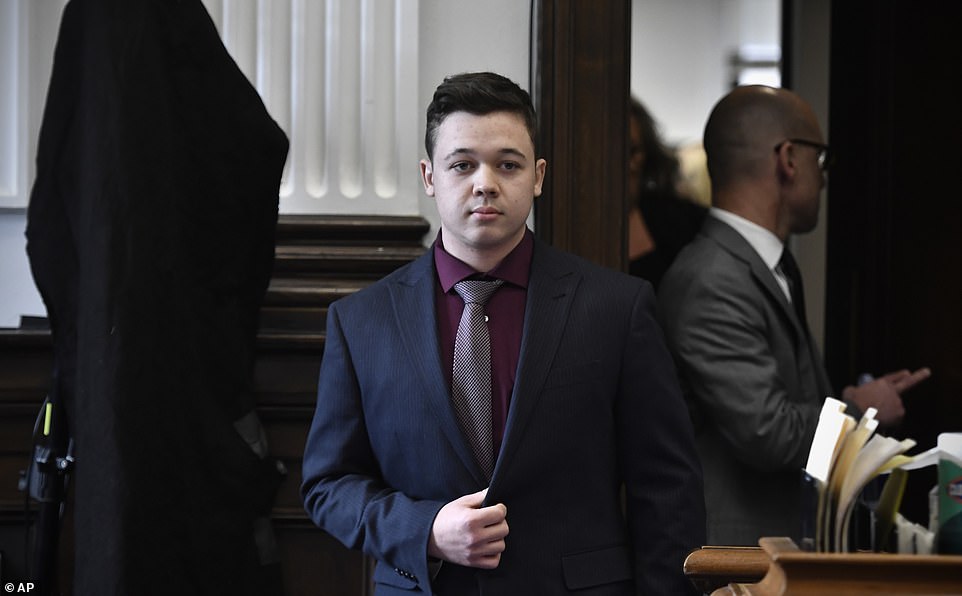 Kyle Rittenhouse (pictured entering the Kenosha courthouse on November 19 to receive the verdict), was acquitted on all charges after admitting to shooting dead two men and injuring a third in what he claimed was ‘self-defense’ 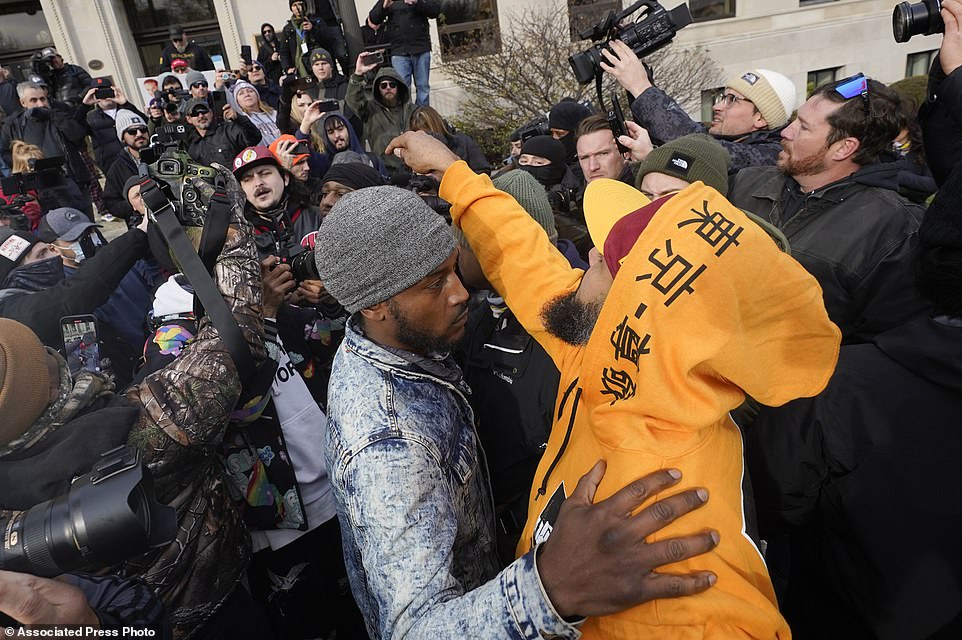 Pictured: Protesters are seen arguing outside the Kenosha County Courthouse on Friday November 19 after Kyle Rittenhouse was acquitted of all charges after pleading self-defense in the deadly Kenosha shootings that became a flashpoint in the nation’s debate over guns, vigilantism and racial injustice

Republicans including former President Donald Trump have been quick to applaud the verdict. They stand by Rittenhouse as a patriot who took a stand against lawlessness and exercised his Second Amendment rights.

Discord over the right to carry guns in public places spilled over into state legislatures in the aftermath of a 2020 plot to storm the Michigan Capitol, the January 6 insurrection at the U.S. Capitol and other threats. States including Michigan and New Mexico this year banned guns at their capitols, while Montana and Utah shored up concealed-carry rights.

At the Supreme Court, justices are weighing the biggest guns case in more than a decade, a dispute over whether New York´s gun permitting law violates the Second Amendment right to ‘keep and bear arms.’

Defenders of the law say that striking it down would lead to more guns on the streets of cities, including New York and Los Angeles.

During oral arguments this month, justices also appeared to worry that a broad ruling might threaten gun restrictions on subways and at bars, stadiums and other gathering places.

New York´s law has been in place since 1913. It says that to carry a concealed handgun in public for self-defense, an applicant has to demonstrate an actual need for the weapon. 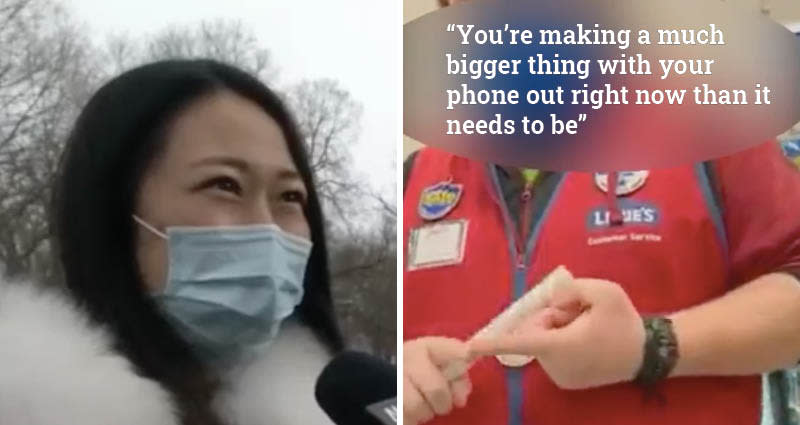 She is the "Iron Grandma", the oldest woman to finish IronMan. 3:47 (Trends Wide) -- Thelma Sutcliffe, who was the oldest person in the United States, died Monday...