Fighting raged again between Armenia and Azerbaijan last night as the two ex-Soviet nations battle over a disputed region in a conflict which could erupt into a proxy war between Russia and Turkey.

Azerbaijan aired footage of two Armenian tanks being blown up on the battlefield while Armenia claimed to have taken out 80 armoured vehicles, 49 drones and four Azerbaijani helicopters as of Monday night.

Both sides accused the other of firing heavy artillery in fighting which has killed dozens of people, allegedly including civilians, since the latest violence broke out on Sunday in the disputed Nagorno-Karakbakh region.

Separatists in the region, which is mainly inhabited by ethnic Armenians, are fighting for secession from Azerbaijan – which has the strident backing of its close ally Turkey.

Armenia, which is backing the separatists, last night accused Turkey of ‘supporting Azerbaijan to carry out genocidal acts’, a reference to the early 20th-century massacre which it calls the Armenian Genocide and which still poisons relations between Turkey and Armenia.

Martial law has been declared in both countries and Armenia has banned men over 18 in its military reserves from leaving the country as fighting continues despite global pleas for calm.

Armenia warned today that it would deploy more destructive weapons because of the alleged Azerbaijani offensive, saying the conflict had been ‘raised to a new level’.

A move to all-out war could draw in nuclear-armed Russia, which has a military base in Armenia but has called for the hostilities to be ‘immediately ended’. 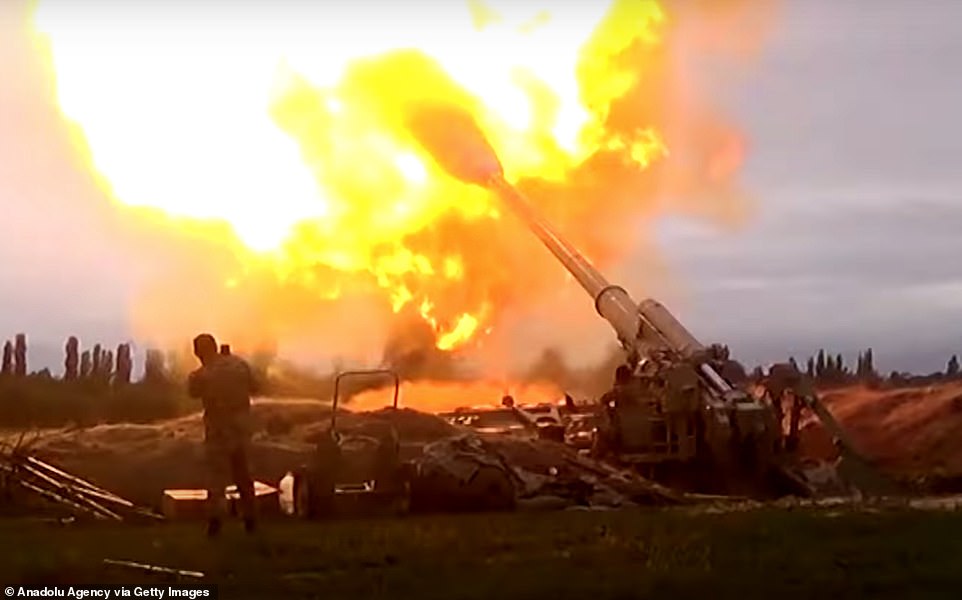 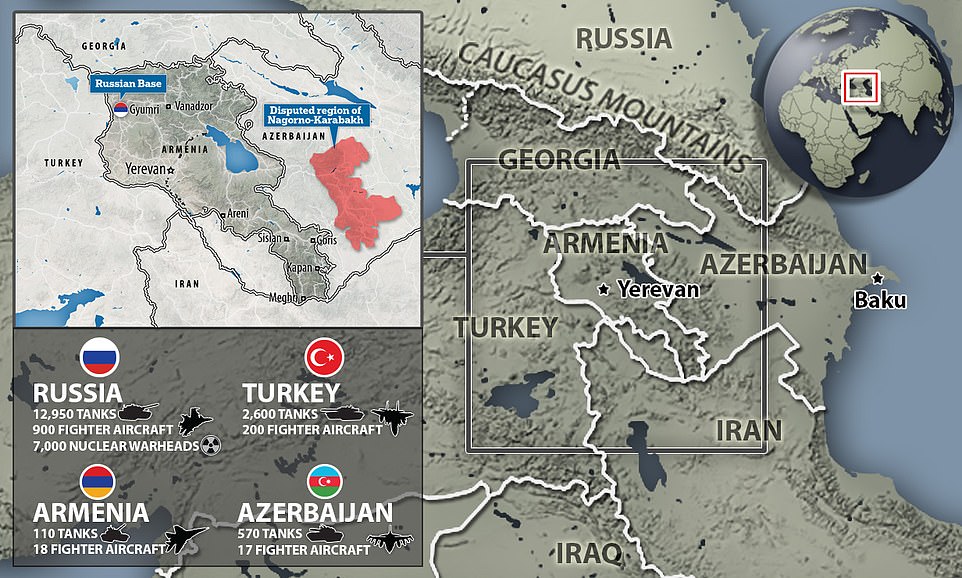 Crossroads between the Middle East and Russia: The fighting is in the disputed Nagorno-Karabakh of Azerbaijan which is controlled by separatists allied to Armenia. Turkey borders Armenia but is an ally of Azerbaijan, and Ankara’s support for Baku is the latest military adventure in the region after incursions into Syria and Libya. Both Armenia and Azerbaijan are former Soviet republics that border Iran. Moscow has called for both sides to stop the fighting

Why Armenia and Azerbaijan are fighting again

Azerbaijan’s defence ministry said today that the opposing forces attempted to recover lost ground by launching counter-attacks in the directions of Fizuli, Jabrayil, Agdere and Terter.

The ministry said there was fighting around Fizuli on Tueday morning and the Armenian army shelled the Dashkesan region on the border between the two countries, miles away from Nagorno-Karabakh.

Armenia denied those claims, but reported fighting throughout the night and said that Nagorno-Karabakh’s army repelled attacks in several directions along the line of contact.

How the latest fighting broke out is not fully clear, but both sides blame the other for initiating the violence.

Officials in Armenia’s capital Yerevan said the separatists in the Nagorny-Karabakh region were resisting an Azerbaijani offensive.

Military leaders in the Armenian enclave say that 58 servicemen on their side have been killed so far, while both sides blame the other for alleged civilian deaths.

Armenia claimed on Tuesday that a nine-year-old girl was killed in shelling, while her mother and a brother were wounded, while Azerbaijan says five members of a family died in the gunfire.

Turkish president Recep Tayyip Erdogan came down firmly on the side of Azerbaijan, which shares ethnic, cultural and linguistic ties with the larger power.

‘The time has come for the crisis in the region that started with the occupation of Nagorno-Karabakh to be put to an end,’ Erdogan said. ‘Now Azerbaijan must take matters into its own hands.’

Armenia has accused Turkey of sending mercenaries to back Azerbaijan, a claim which Erdogan’s government denies.

Turkey informed the fighters they would be tasked with ‘guarding border regions’ in Azerbaijan in return for wages of up to $2,000, said Rami Abdul Rahman, the head of the Britain-based Syrian Observatory for Human Rights.

Anna Naghdalyan, a spokeswoman for Armenia’s foreign ministry, said people in Nagorno-Karabakh were ‘fighting against a Turkish-Azerbaijani alliance’.

‘Turkey, which a century ago annihilated Armenian people in their historical homeland and justifies that crime, now supports Azerbaijan by all possible means to carry out same genocidal acts in South Caucasus,’ she said.

As many as 1.5million Armenians were rounded up and killed by their Turkish rulers in mass killings which started during World War I, but Turkey fiercely disputes the term ‘genocide’.

Turkey has also conducted drills with F-16 jets in Azerbaijan, but Baku denied claims that it has any of the fighter planes or that one had been shot down.

Russia has previously supplied Armenia with weapons in the sensitive region, where pipelines shipping Caspian oil and natural gas from Azerbaijan to the world pass close to Nagorno-Karabakh. 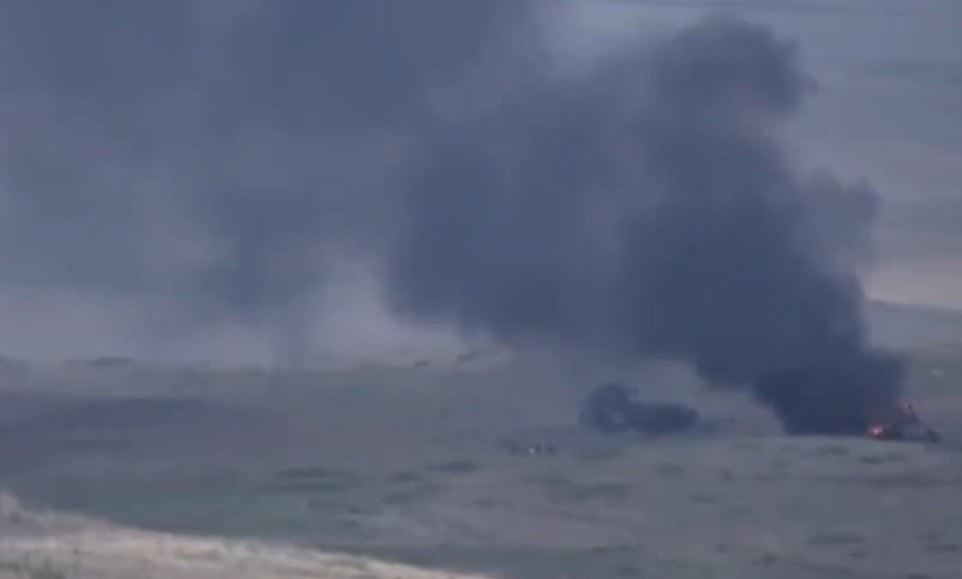 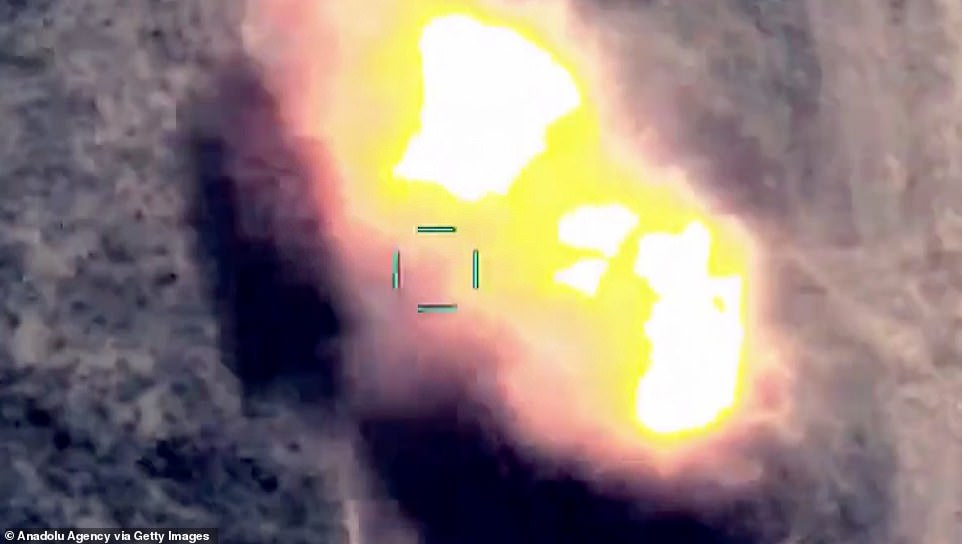 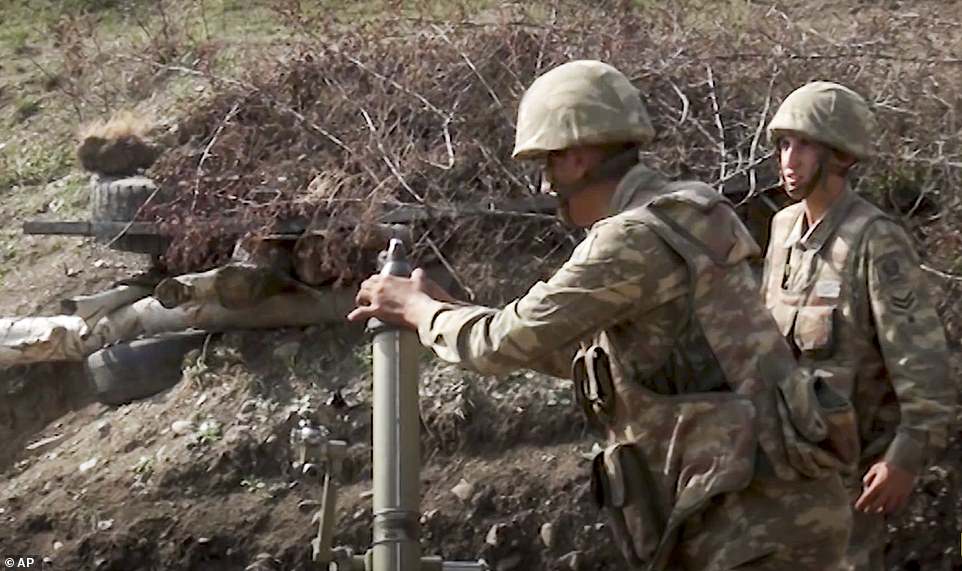 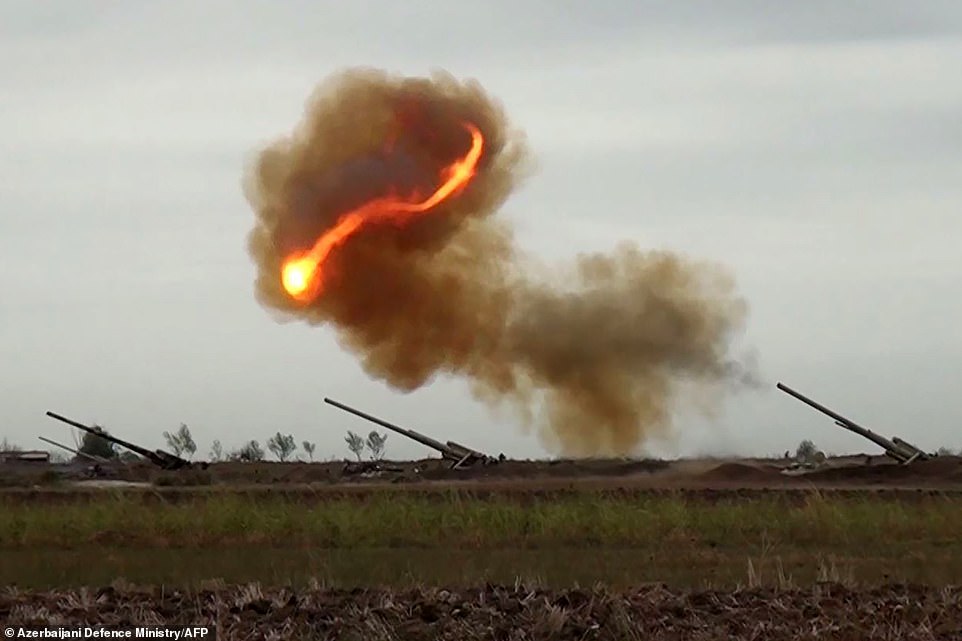 How the military forces compare

The report of Turkish intervention comes after the European Union warned regional powers not to interfere in the fighting and condemned a ‘serious escalation’ that threatens regional stability.

‘Armenia is disturbed by Turkey’s solidarity with Azerbaijan and is producing lies against Turkey,’ Celik said.

Erdogan criticized France, the US and Russia – the three chairs of the so-called Minsk group that was set up in 1992 to resolve the Nagorno-Karabakh conflict – saying they had failed to resolve the issue for 30 years.

‘They have done their best not to solve this issue. And now they come and counsel and issue threats. They say, is Turkey here, is the Turkish military here?,’ Erdogan said.

Armenia and Karabakh declared martial law and military mobilisation on Sunday, while Azerbaijan imposed military rule and a curfew in large cities.

Analysts warn that the conflict could escalate into a proxy conflict between Moscow and Ankara, who both wield influence in Syria and Libya already.

Michael Carpenter, a former Pentagon official, said any Turkish involvement would be ‘hugely destabilising’ and ‘could lead to a proxy war between Turkey and Russia’.

Rita Katz, director of the SITE Intelligence monitoring group, said the two countries ‘continue to vie for control across region, backing proxies on contentious non-secular lines’ – referring to the fact that Azerbaijan is a majority-Muslim country, while most Armenians are Christians.

In addition to the EU and Russia, France, Germany, Italy and the United States have urged a ceasefire.

President Donald Trump said on Sunday that the United States would seek to end the violence. ‘We’re looking at it very strongly,’ he told a news briefing. ‘We have a lot of good relationships in that area. We’ll see if we can stop it.’

Democratic nominee Joe Biden urged the White House to push for more observers along the ceasefire line and accused Russia of ‘cynically providing arms to both sides.’ 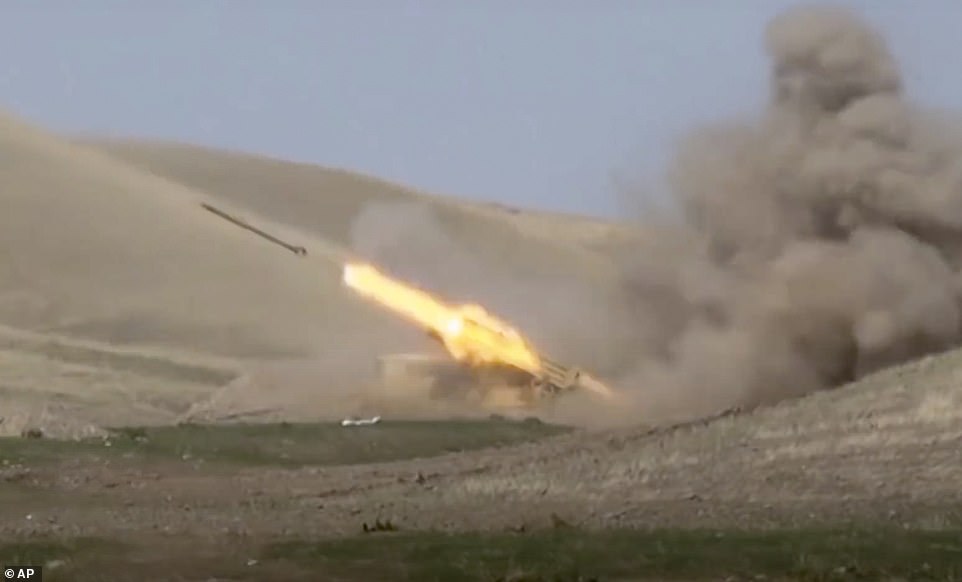 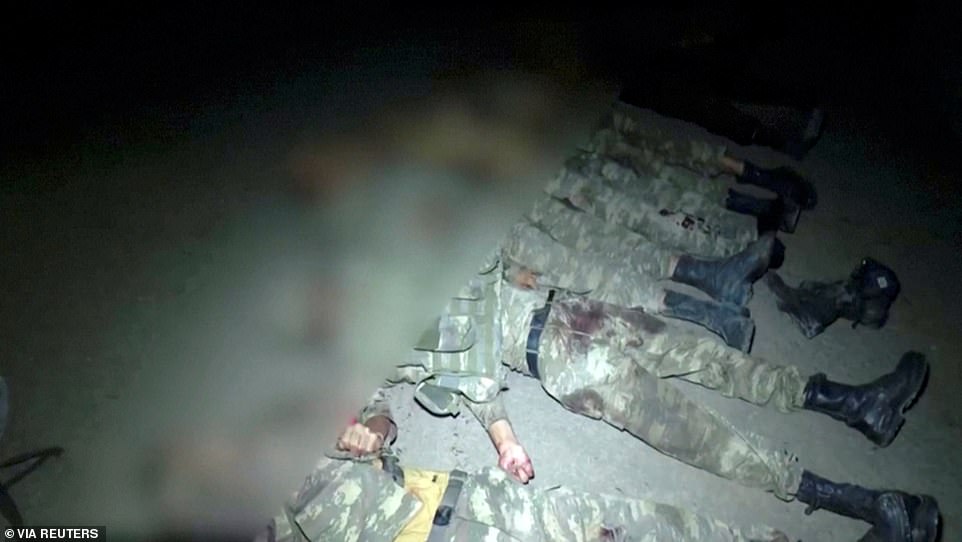 Footage released by the Nagorno-Karabakh breakaway region shows bodies of men in military uniform, said to be Azerbaijani military personnel killed during the clashes over the disputed region 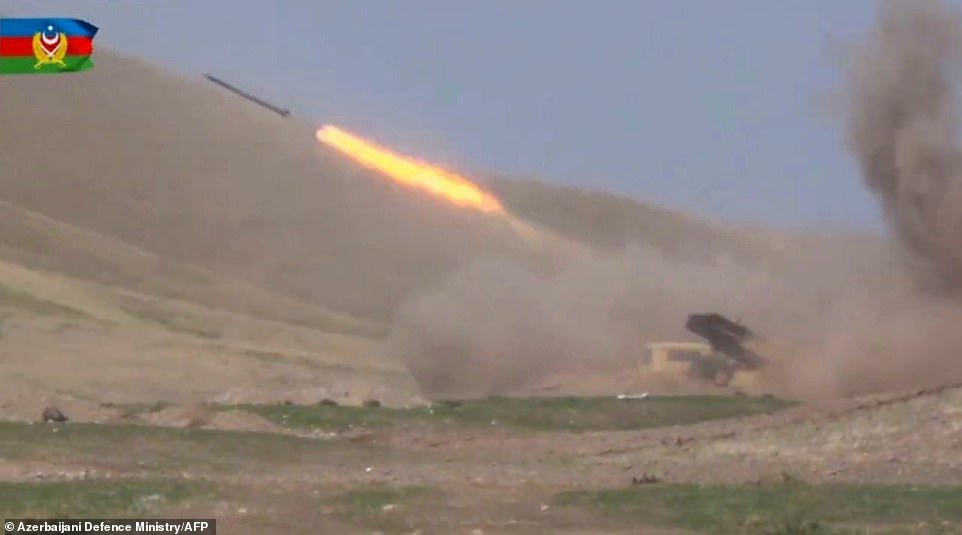 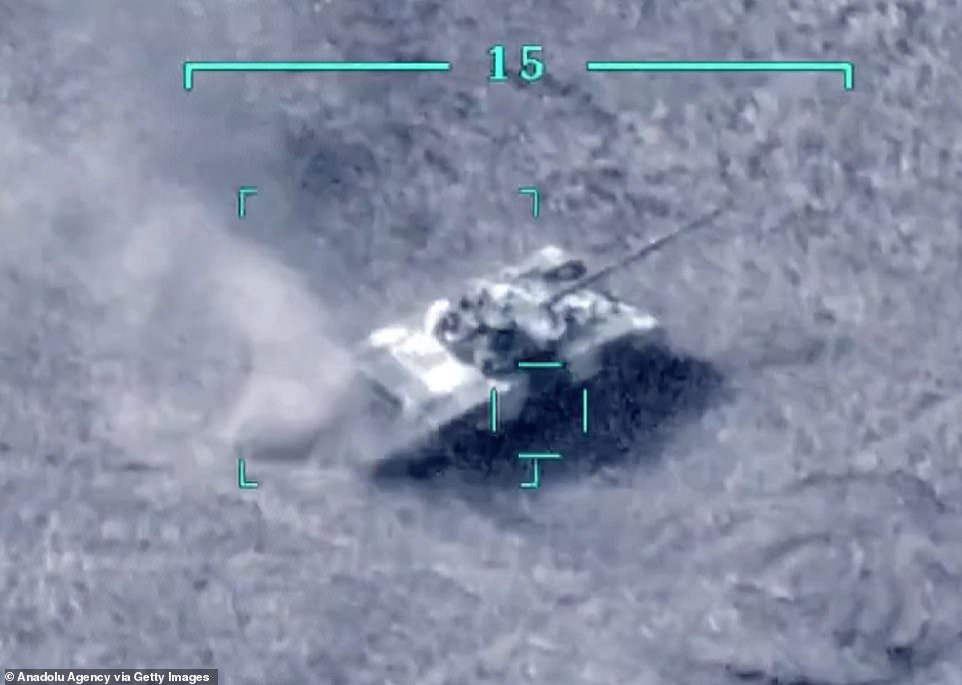 One video shows an Azerbaijani TB-2 drone, made in Turkey, tracking an Armenian T-72 tank across the battlefield

Five European countries – Belgium, Estonia, France, Germany and Britain – asked for a closed-door meeting of the UN Security Council on the escalating conflict on Tuesday.

UN Secretary-General Antonio Guterres spoke to both countries’ leaders and called for ‘an immediate stop to the fighting, a de-escalation of tensions and a return to meaningful negotiations without preconditions or delay.

Kremlin spokesman Dmitry Peskov said the situation ‘is a cause for concern for Moscow and other countries.’

‘We believe that the hostilities should be immediately ended,’ Peskov said, adding that the process of resolving the conflict should shift into ‘a politico-diplomatic’ dimension.

Nuclear-armed Russia has a military base in Armenia and considers it to be a strategic partner in the South Caucasus region, supplying the ex-Soviet country with weapons.

The Kremlin has cast itself as a mediator but Azerbaijan claimed last month that Moscow was ‘intensively arming Armenia’ after earlier clashes in July.

Hostilities this year have been the worst since 2016, when intense fighting killed dozens and threatened to escalate into all-out war.

Nagorno-Karabakh broke away from Azerbaijan in a conflict that broke out as the Soviet Union collapsed in 1991.

Although a ceasefire was agreed in 1994, after thousands of people were killed and many more displaced, Azerbaijan and Armenia frequently accuse each other of attacks around Nagorno-Karabakh and along the separate Azeri-Armenian frontier.

During the worst recent Karabakh clashes in April 2016, around 110 people were killed.

In July 2020, heavy clashes along the two countries’ shared border – hundreds of miles from Karabakh – claimed the lives of at least 17 soldiers from both sides.