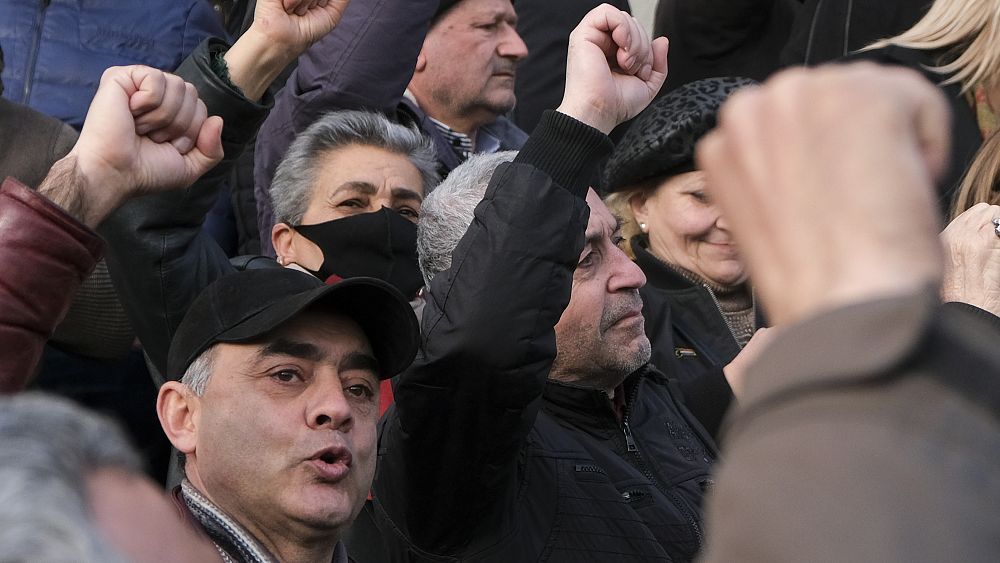 Flanked by thousands of his supporters, the Armenian Prime Minister on Thursday marched through the streets of Yerevan in a bid to rally people behind him after claiming the army had attempted a coup.

While Nikol Pashinyan”s advocates came out in Republic Square in the heart of the Armenian capital, throngs of opposition protesters also convened in the city, bringing traffic to a halt and chanting “Nikol, resign!”

Euronews looks at what’s behind the swell of unrest in Armenia.

The catalyst for the recent unrest in Armenia is last year’s bloody conflict with Azerbaijan over the Nagorno Karabakh region, which saw thousands killed on both sides.

Swathes of territory in and around the mountainous region were ceded to Azerbaijan when the two sides signed a November 10 Russian-brokered peace deal and Pashinyan has faced protests ever since.

This week’s unrest centres around a “reckoning on Armenia’s perceived failings in that conflict and who is responsible,” associate fellow on the Russia and Eurasia Programme at Chatham House, Laurence Broers, told Euronews.

The importance of the Nagorno Karabakh region to Armenia and Azerbaijan should not be underestimated.

“This is an issue of identity for both sides,” Dr Kevork Oskanian, Honorary Research Fellow at Birmingham University, who specialises in Eurasian politics, told Euronews.

“Nagorno-Karabakh is central to the identity of both Armenians and Azerbaijanis — it is very hard to compromise when it’s about such a deep-held part of your identity.”

Who are the key players?

Oskanian observes there are “two camps now ranged against each other” in Armenia.

“The opposition camp, Pashinyan, basically taking his supporters into the streets, and the army in between,” he said.

The leader of the “My Step” was massively popular two years ago, winning the elections in 2018 with a landslide result of over 70%, but recent polls have shown this score has dramatically slumped to around 45%.

Anti-government sentiment has surged since the November conflict, with Pashinyan’s critics criticising him for “losing the war”, according to Oskanian, and “as the losing side, he has to resign”.

The opposition: There have been ongoing opposition protests since a November 9 ceasefire in Nagorno Karabakh, spearheaded by a group of 17 opposition parties, all but one of which are not in parliament,

“They mostly represent the old regime – the people who were in power before 2018 – and are more nationalist,” said Oskanian. “And, they have, of course, been demanding the resignation of Pashinyan since November.”

He went on that there has been a “to and fro” between these groups and government on whether to hold snap preterm parliamentary elections, with the opposition wanting the prime minister to resign before they go ahead.

The opposition has been fractured in terms of whether it wants the new elections or not and Pashinyan remains “less unpopular than any other figure”, according to Broers.

The army: “There’s a lot of frustration in the top brass of the general staff of the army,” he added.

They are “pushing back” and have taken a “clear stance” in a statement they sent out calling for Pashinyan to resign.

“That is quite an extraordinary thing to happen,” Broers added.

What happened this week?

The trigger for recent events was comments made by Pashinyan about the alleged ineffectiveness of the Iskander missile system.

“He made comments in the local media that they hadn’t ignited on impact, or only a very small percentage of them had done so. So, kind of putting the blame on the army and on its procurement strategies,” Broers explained.

This came in the wake of the terrible trauma, human losses, from the Nagorno-Karabakh conflict, into an “already with a quite dysfunctional political context”, he added, mixed in with a country and government grappling with the COVID pandemic.

The military’s top brass released a statement saying “the prime minister and the government are no longer able to make reasonable decisions”, according to Armenpress, the country’s state news agency.

“For a long time, the Armenian armed forces were patiently tolerating the ‘attacks’ by the incumbent government aimed at defaming the armed forces, but everything has its limits,” the officials were cited as saying.

He accused top military officers of attempting a coup, at this point rallying his supporters to gather at the march telling them: “The army is not a political institution and attempts to involve it in political processes are unacceptable.”

Broers and Oskanian were both in agreement that the move didn’t amount to a military coup. “Technically, it’s not (a coup) because you don’t have tanks on the streets. There’s no resistance by the army to take over. I think this is more a case of insubordination,” the latter said.

But the move did mark an “unprecedented intervention” in the political arena, Giragosian said.

Where could things go from here?

For the experts, the only routes out of the crisis is a dialogue on elections, which is the outcome that most Armenians want, according to recent polls.

Broers also called for a formal, authoritative enquiry into the recent conflict, saying it “needs to be understood and learned from, not leveraged”.

He urged people to think about the “silent majority of Armenian citizens who actually don’t want this polarisation and actually want a competent government, an accountable government, and their voices are completely lost in this very polarised, fiery rhetoric”.

Broers said he “worries about them and their concerns” amid the “very polarised context in terms of government and opposition”.

Armenia’s president, who holds a ceremonial role, is today mediating talks between the government, and members of the opposition, which Oskanian hopes “something might actually come out of”.

Covid-19: Tennis gives children ‘a bit of normal life back’