A man who has single-handedly campaigned to remember the deeds of Britain’s ‘forgotten’ servicemen restored more than 80 graves to fallen soldiers.

Steve Davies, 63, from Hawkhurst, in Kent, felt compelled to act after he stumbled across the overgrown grave of an 18-year-old rifleman who died in the First World War.

Mr Davies, a married father-of-three, served two tours of duty in the Royal Green Jackets, 3rd battalion, in Northern Ireland during the 1970s. 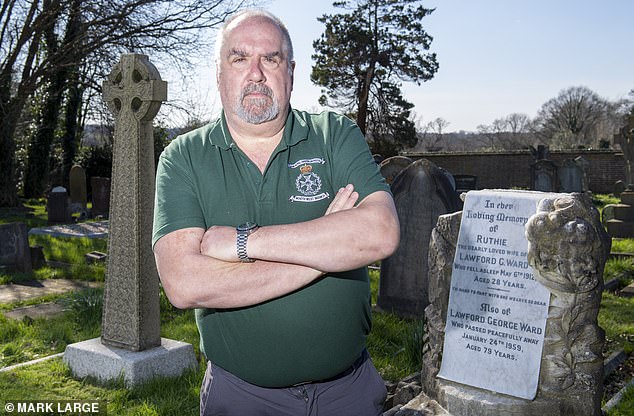 Steve Davies, 63, from Hawkhurst, Kent, (pictured) has been restoring graves of fallen soldiers for more than three years 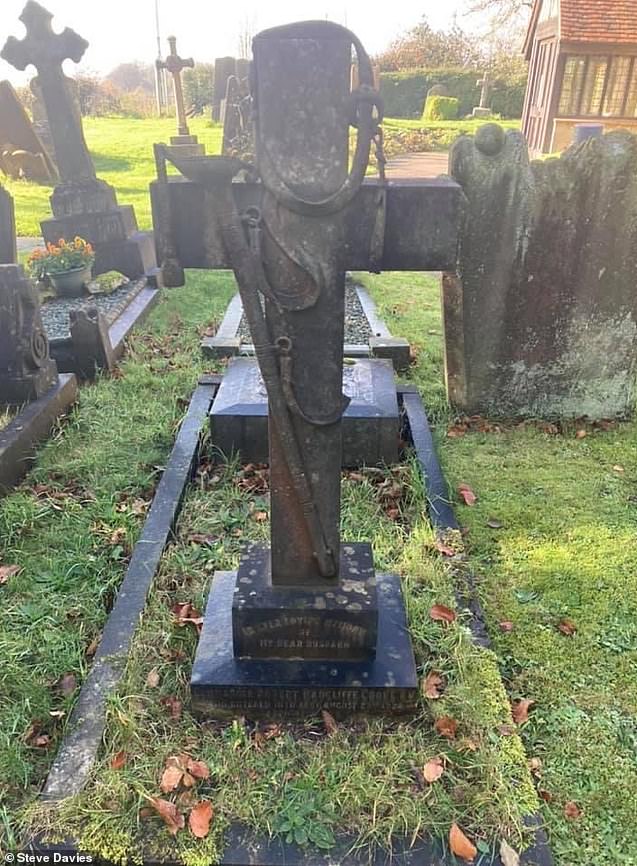 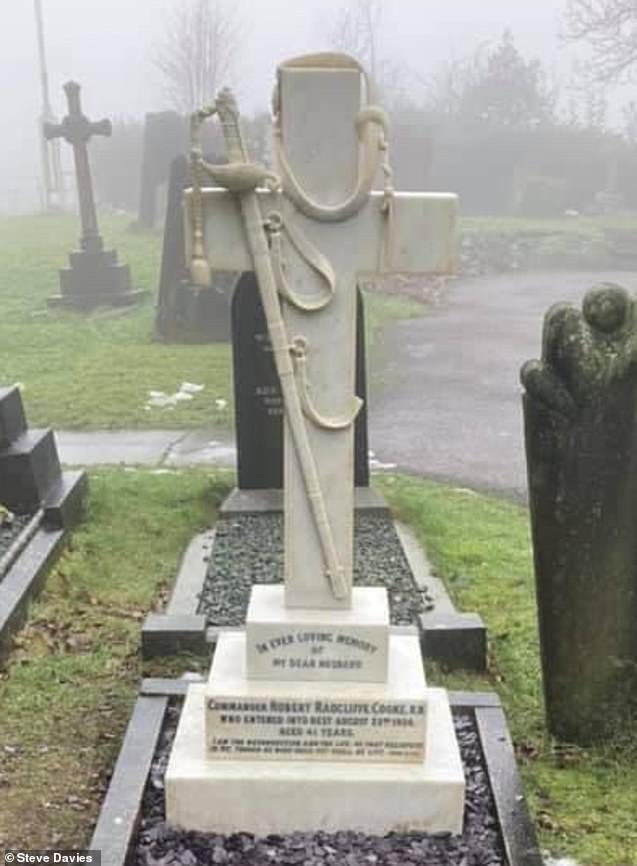 One grave Steve restored was that belonging to Commander Robert Radcliffe Cooke, who joined the Royal Navy as a cadet in 1897 and rose to rank of Commander before his death in 1924

He was discharged having attained the rank of corporal.

Mr Davies has restored more than 80 graves of British servicemen across the south east of England, over the past three years.

Among the list of the graves he has restored are eight recipients of the Victoria Cross, a baronet, several knights and 10 generals.

‘I was attending a family christening in Sandhurst and wandered outside. There was a dirty overgrown war grave of an 18-year-old rifleman in the Rifle brigade – my antecedent regiment – killed six weeks before the Armistice,’ Mr Davies said.

‘I came back the next day and sorted it out. The rest is history.

‘I did it because it was there and annoying that you could not read about the history of these guys. I have an interest in their history.

‘I have restored graves as far as East Sussex, around Greater London and in Kent. I have been to probably about 25 different sites anywhere up to an hour’s drive from home.’ 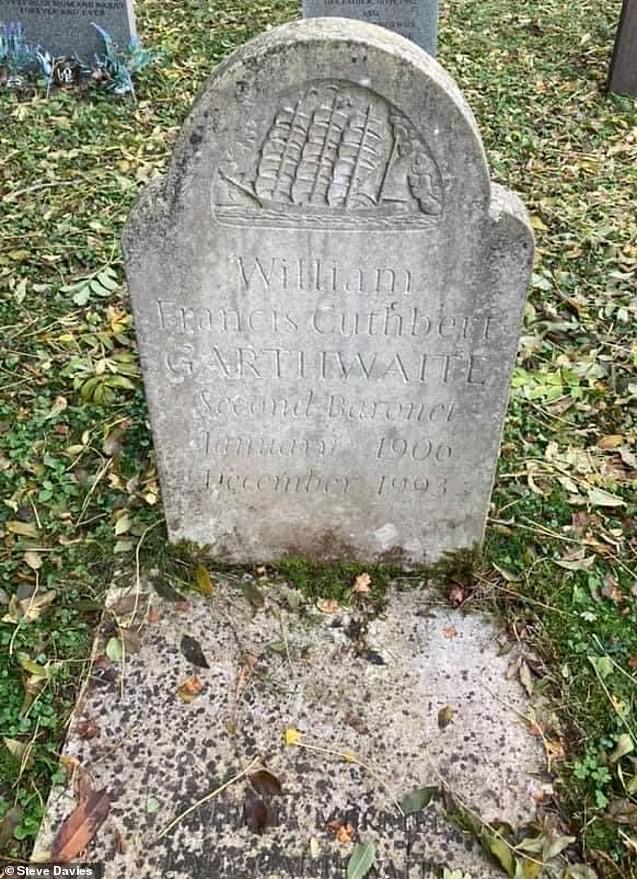 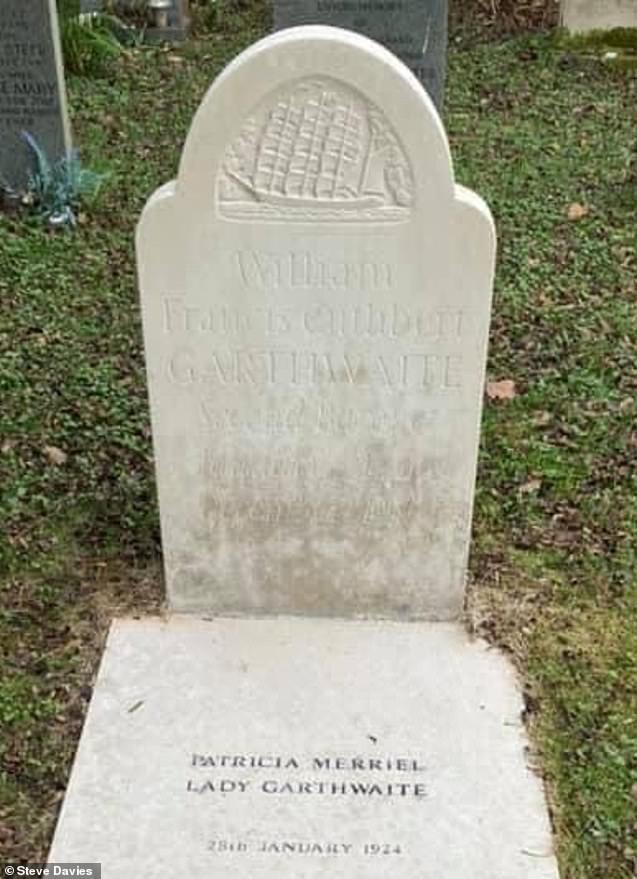 Another grave belonging to Sir William Francis Cuthbert Garthwaite, 2nd Baronet of Durham (pictured) was also on the list of restorations 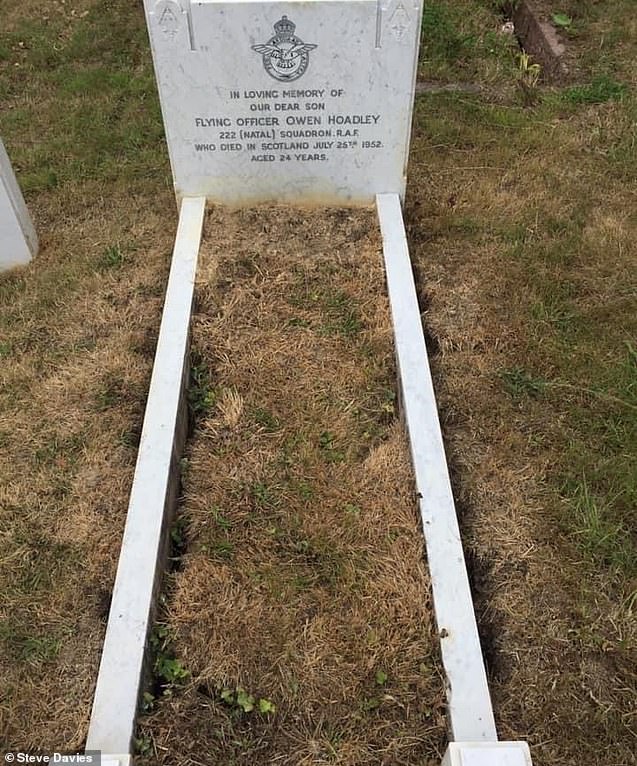 Steve first started restoring graves after he stumbled across one belonging to an 18-year-old rifleman who died in the First World War. Pictured: The grave of Flying Officer Owen Headley 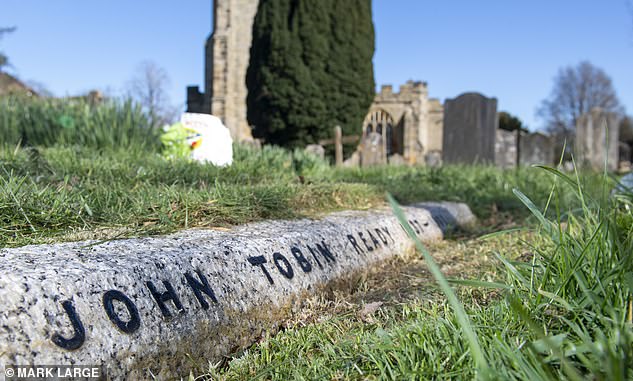 One restoration included the grave of Colonel John Tobin Ready, known as ‘JTR’ (pictured), who joined the 66th Royal Berkshire Regiment in 1854 and served in the second Afghan War

The majority of the graves Mr Davies has restored fall outside of remit of the Commonwealth War Graves Commission, which tends to the graves of those fallen in both world wars.

Using a combination of water and professional cleaning fluids Mr Davies gently removes the decades of pollution to have weathered the headstones and in some cases has been forced to remodel parts of the grave which have broken off.

He was helped with the remodelling by a comrade from his former battalion.

The restorations, which are painstakingly completed over numerous visits, have cost Mr Davies hundreds of pounds each in some cases.

While one charity, Project Nova, provided him with five gallons of D2 nio-biological cleaner and Dutch company HG supplied 96 bottles of headstone cleaner, Mr Davies has funded the entire project.

While Mr Davies has never asked for donations, his family have since launched a fundraising page to help with the cost of restoring the graves.

Mr Davies added: ‘Like most soldiers I had my mental health issues several years ago and this has really helped me.

‘I try to restore the graves which are outside of the Commonwealth War Graves Commission’s remit.

‘They are just forgotten about. The whole idea of this is that people should know about these men. 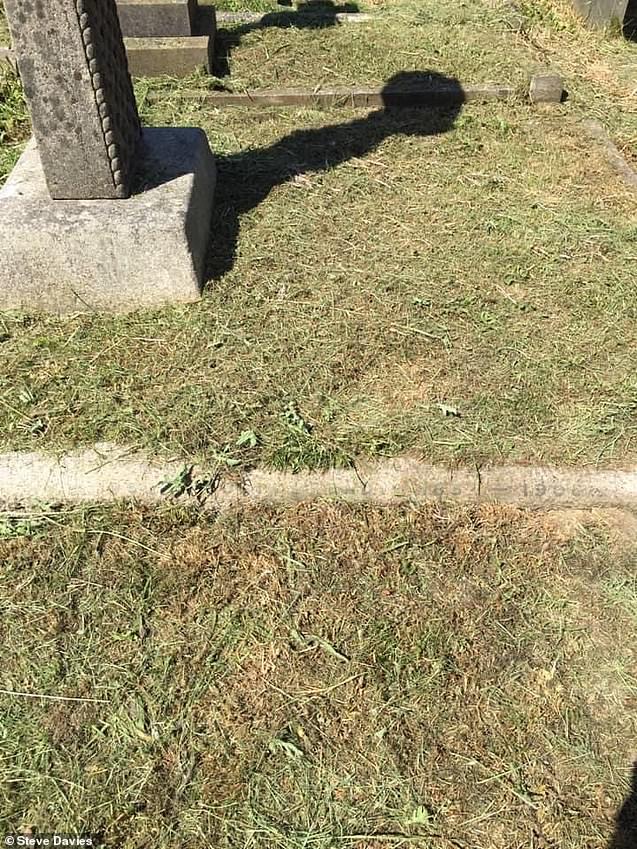 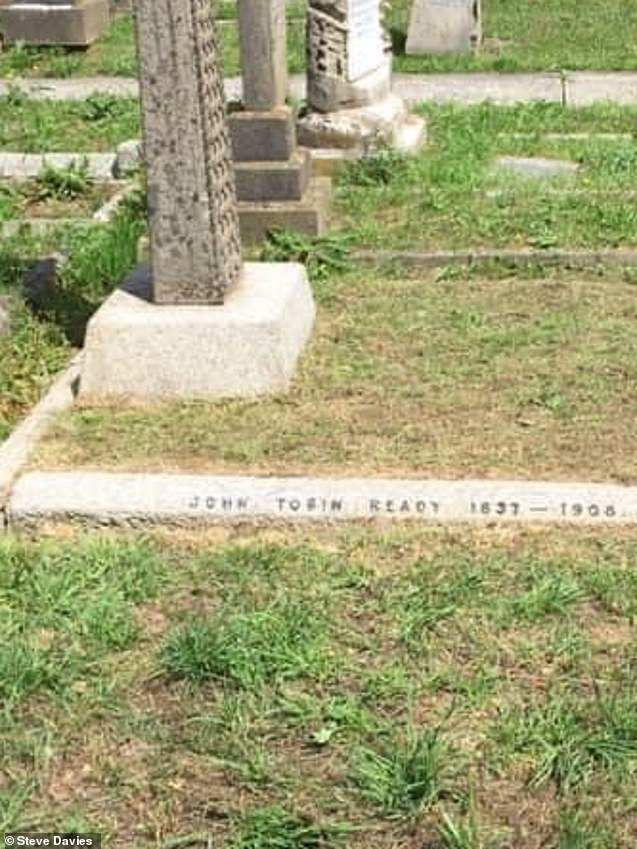 The majority of the graves Mr Davies has restored fall outside of remit of the Commonwealth War Graves Commission. Pictured: The transformation of Colonel John Tobin Ready’s grave 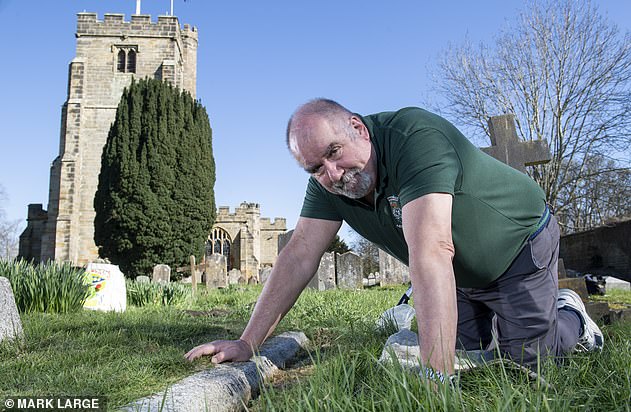 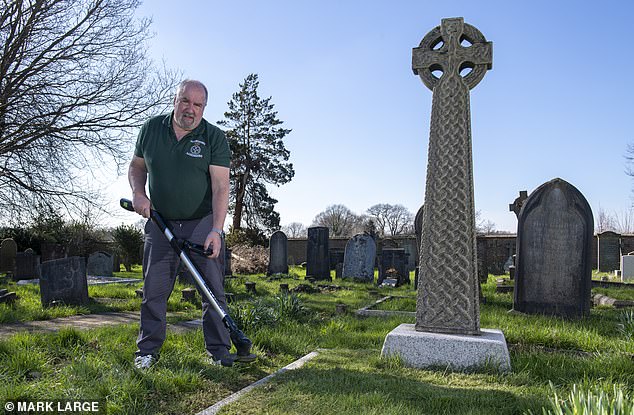 ‘My wife and family think I’m mad but they support it as they know it is helpful to my health.

‘One grave took five months to restore and I had to get a model maker to help with the sword on the grave.

‘The length of time it takes all depends on the age and quality of the grave.’

With the help of researcher Jane Robinson, Mr Davies has contacted many of the relatives of those whose grave had been left forgotten.

In one instance Ms Robinson, who researched the First World War altar frontal at St Paul’s Cathedral, unearthed a clip of one soldier’s voice allowing his grandchildren to hear it for the first time.

The man, Sir William Francis Cuthbert Garthwaite, had been the only Royal Navy pilot to hit the German battleship Bismarck with a torpedo. An interview with him was held in the Imperial War Museum.

Mr Davies added: ‘A lot of the families are surprised when I contact them out of the blue. I send them before and after pictures of the grave and the history of the man. It’s really well received – I am remembering them and what they did.

‘Garthwaite’s daughter in law approached me to ask if I would clean the grave. While researching his history Jane found an audio interview of him in the Imperial War Museum.

‘I sent it to the family, who thanked me as two of the grandchildren had never heard his voice before.’

Some of the men behind the graves Mr Davies has restored 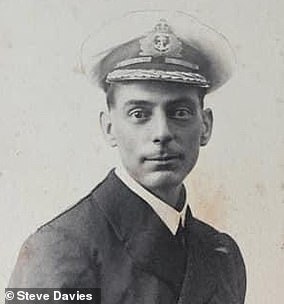 Robert joined the Royal Navy as a cadet in 1897 and rose to rank of Commander.

He captained one of the first submarines, named A4. He died of tuberculosis in 1924.

Sir William hit the German battleship Bismarck with a torpedo, the only Royal Navy pilot to do so.

He retired with the rank of commander and earned the Distinguished Service Cross and bar. He died in 1993.

Owen was a Gloster meteor pilot in the 222 (Natal) Squadron of the RAF. 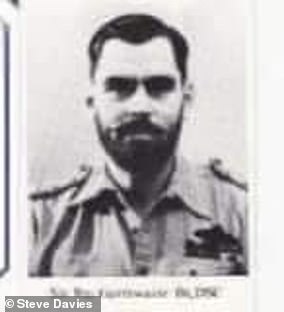 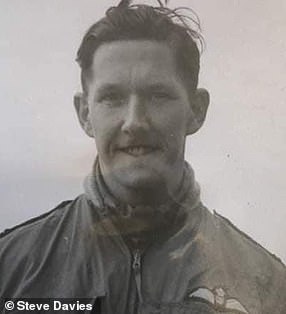 Guy was born in 1897 joined the East Kent Regiment and died in the battle of Sheikh Sa’ad, in Mesopotamia, during the First World War.

His grave reads he died ‘whilst fearlessly leading his platoon close to the enemy’s trenches’. He died in 1916. 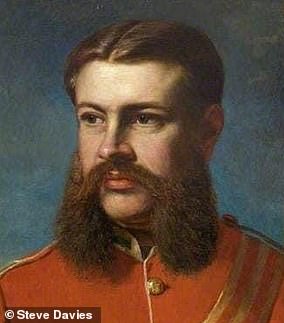 John joined the 66th Royal Berkshire Regiment in 1854 and served in the second Afghan War.

Fought at Battle of Maiwand and involved in last stand and loss of the colours. He died in 1908.

Edmund was commissioned into the West Yorkshire Regiment before transferring to the 22nd Punjab Infantry.

He rose to the rank of brigadier-general and won the Victoria Cross for saving a comrade under heavy enemy fire at Malakand, on the Indian Frontier.

Reginald served in both world wars and was involved in the planning of the D-Day landings.

His request for demotion to join in the amphibious assault was denied. He died in 1992. 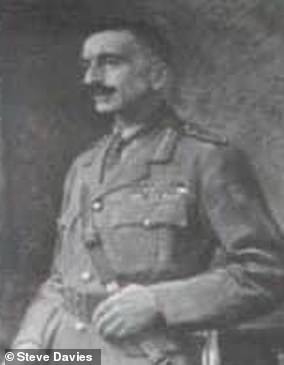 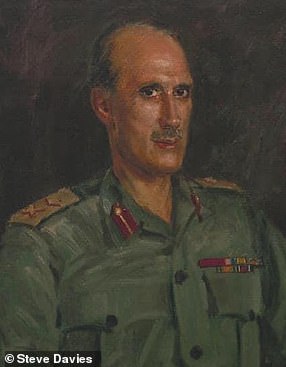 Dennis served in the Royal West Kents Regiment during the Malayan Emergency.

He survived an ambush which saw half of his platoon killed. He died in 1972.