‘Babe we should record an OnlyFans video back here’: Arrested couple film themselves having sex in back of Florida Highway Patrol cruiser

An arrested couple filmed themselves having sex in a Florida police car when an officer had stepped away and the sex act was caught on the car’s camera.

Watkins and Noa were left alone for a few minutes because the officer closed the rear door and stepped away.

The pair, who were not handcuffed, then engaged in sexual activity which was captured on a ‘prisoner compartment camera.’

Noa exposed his genitals and Watkins began to perform a sexual act on him, according to the Smoking Gun.

The 24-year-old used his phone to record and note that his companion was performing a sex act on him in a police car.

Speaking on Facetime later, Watkins boasted to Noa’s friend that she had performed a sex act on him.

Her companion had previously joined her in the patrol car and then Watkins asked a cop if she could perform a sexual act on Noa.

He told her she would not be able to but she asked the same question again and was given another ‘no’ by the officer who then stepped away.

Summer Watkins, 24 (pictured) performed a sex act on her boyfriend Yordan Noa, also 24, in the Florida highway patrol cruiser. The pair had been pulled over on Thursday because Noa was driving with  a suspended license

The duo were in the police car because Noa’s BMW had been pulled over early on Thursday by police because he was driving with a suspended license.

An arrest report said cops were planning to take the duo to Shell Station, Naples, where they were to be able to ‘make arrangements to get home.’

A patrolman discovered the lewd act had occurred when they looked at video footage of the couple in the police car an hour later.

Watkins had already been dropped off so Trooper J.D Perez-Morales returned to the gas station and arrested her.

Watkins was charged with lewd and lascivious behavior and breach of peace which are both misdemeanors.

Watkins later bonded out of jail and is scheduled for arraignment on December 16.

Noa was arrested after cops found drugs in his car- marijuana and a controlled substance.

He was also charged with lewd and lascivious behavior, breach of peace and exposure of sexual organs.

Noa is free on bond and scheduled to be arraigned on December 13. 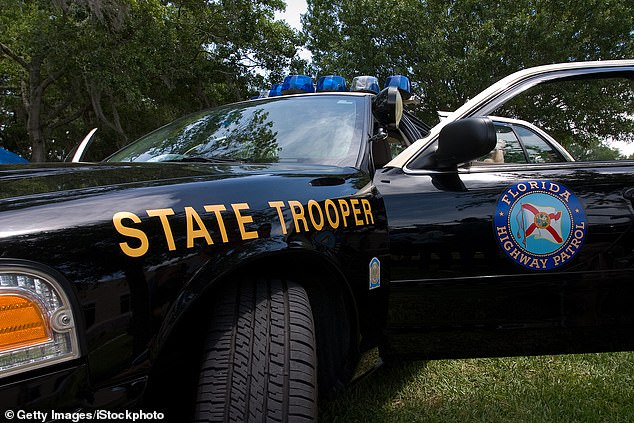 The pair, who were not handcuffed, engaged in sexual activity which was captured on a ‘prisoner compartment camera’