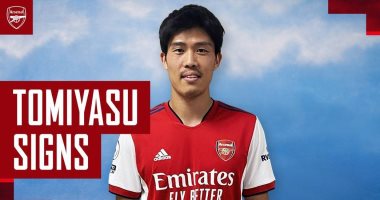 Arsenal have announced the signing of Japan international Takehiro Tomiyasu from Italian club Bologna on a long-term contract. The 22-year-old started his career in his homeland with Avespa Fukuoka and developed through the youth ranks before making 45 first-team appearances between 2015 and 2017.

Takehiro moved to Europe in January 2018, signing a contract with Belgian club Saint-Troyd, where he spent 18 months during which time he was voted Player of the Season in the 2018-2019 season.

His performances in Belgium led to Takehiro’s move to Italy and he completed his move to Bologna in July 2019 and during his time in Italy Takehiro became a regular player in the Bologna defence, making 63 appearances in his two Serie A seasons.

Arsenal coach Mikel Arteta said: “We are delighted to sign Takehiro and have been watching him for a while and we are delighted that we have reached an agreement with Bologna. He is an important addition to our squad.”

Mikel Arteta added: “Takehiro is a strong defender with good experience in Serie A and at the international level. He is a versatile defender with great defensive qualities, high technical ability and composure on the ball. He will be an important member of our squad. We look forward to taking Takehiro to join us on his return from international service. “.

Tomiasso represented his country at all levels from the under-16s to the senior side. He participated in 23 matches with the Japanese national team and was a member of the last Olympic team, and participated in three matches in the Olympic Games in Tokyo, Tomiyasu will wear the number 18 shirt.