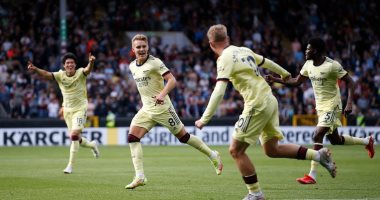 Arsenal snatched a deserved victory from the fangs of its host Burnley team, with a free goal, in the confrontation that brought them together at “Turf Moor”, as part of the fifth round of the English Premier League competitions, “Premier League” for the current season 2021-2022..

Martin Odegaard scored the first goal for the Gunners in the 30th minute of the first half and the match, from a free kick from outside the penalty area, which he played brilliantly through a direct path.

With this result, Arsenal jumped 4 positions at once, as it occupies the twelfth place in the English Premier League table with 6 points, while Burnley is in the nineteenth and penultimate position with a single point..

Arsenal achieved their second victory in the domestic competition in a row, after 3 consecutive defeats, as they beat Norwich City in the last round with a Gabonese goal, Pierre-Emerick Aubameyang.

Arsenal coach Mikel Arteta entered the confrontation with a formation consisting of:

In today’s match, Arsenal missed the efforts of the Egyptian international, Mohamed Elneny, due to an injury, as he is expected to return to the London team’s training next week..