As Arsenal struggled to find the breakthrough early on against Leicester – despite dominating proceedings – their fans were taking to social media predicting what was about to come.

That prediction? A Jamie Vardy 1-0 winner late on after coming on as a substitute to terrorise Arsenal’s defence once more.

Vardy loves a goal against Arsenal. He has now scored 11 times against the Gunners. Only compatriot Wayne Rooney has scored more against them, with 12 to his name. 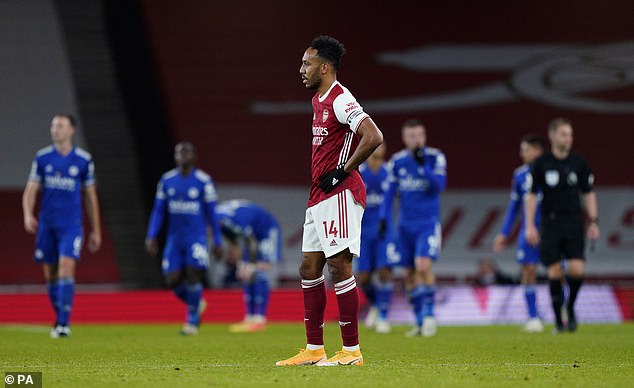 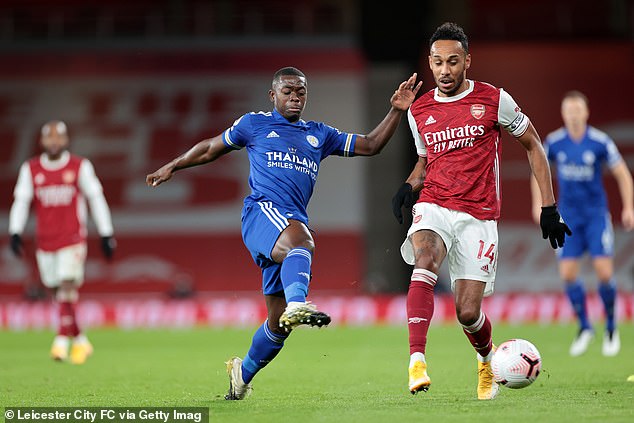 Aubameyang was deployed on the wing at the Emirates, where he struggled to get involved

Sunday’s outcome was far too predictable for many Arsenal fans who have watched their side week in, week out recently.

While Mikel Arteta has made the Gunners a lot tighter at the back shipping just seven goals from their first six matches – only Aston Villa have conceded less with five – he is struggling to find the right balance up the other end of the pitch.

And it has been a problem for a while now for a team that used to torment defences under legendary former manager Arsene Wenger thanks to their scintillating football.

Arsenal were far too laboured in attack once again on Sunday as Leicester executed their game-plan to perfection under Brendan Rodgers, who is making a habit of big scalps. And as Arsenal’s attack continues to falter, Pierre-Emerick Aubameyang is being limited to a supporting role and it is massively hindering his performance.

If Arteta was hoping Aubameyang would be able to offer goals and creativity from the left, he has been proved wrong recently.

There was hope his pace and ruthlessness in front of goal would add another dimension to Arsenal’s attack on the wing but if anything, the strikeforce’s balance is now all over the place.

Aubameyang, in all honesty, has struggled to have any impact on the game when on the flank. After scoring a beauty to open his account to the new Premier League season, the Gabon star put pen to paper on a new lucrative deal that will see his initial wage rise to £250,000 per week, while further bonuses and loyalty payments could take it beyond £350,000.

But since he committed his future to Arsenal, Aubameyang has failed to find the net in the last five Premier League matches – the first time that has happened in his Gunners’ career. After the same stage last term, he had six in six. 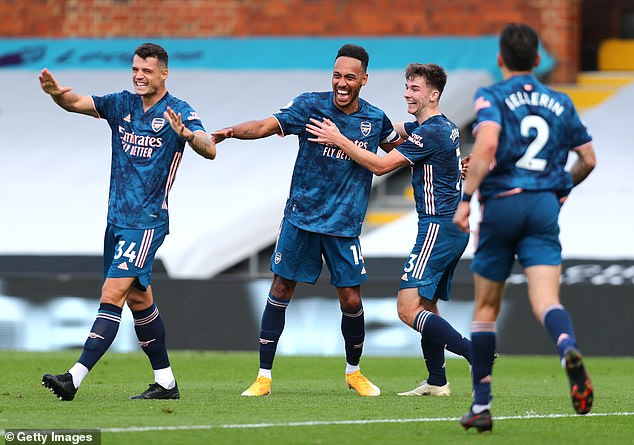 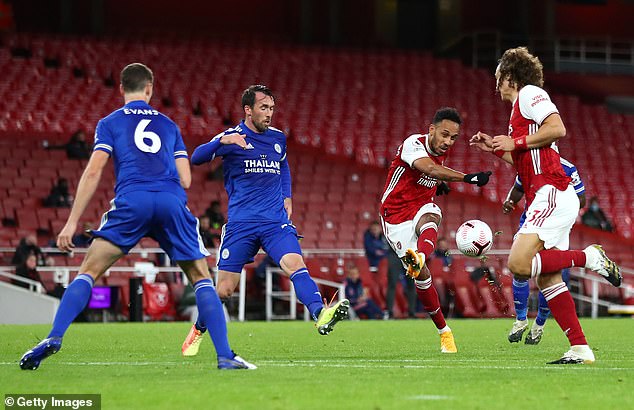 Aubameyang’s previous five-game goal drought came when he was plying his trade for Borussia Dortmund in 2014.

And on the assist front, he isn’t faring any better. He is under-performing in that department, too. Other than creating the goal for Alexandre Lacazette against West Ham early on in the campaign, he hasn’t shown much creativity for team-mates.

And this should rightly alarm Arsenal supporters – if their talisman isn’t scoring or creating goals, where are they actually going to come from in this team?

Arteta continues to put his faith in Lacazette centrally while using Aubameyang on the flank – playing down the right on Sunday. But it’s proving hugely ineffective – Aubameyang is Arsenal’s only true world class player at present and needs to be prioritised centrally.

Lacazette’s continued inclusion is surprising many fans. His form has declined massively and he looks short in confidence in all departments – he missed a sitter in the opening period on Sunday as Kieran Tierney whipped a fierce ball into the six-yard box.

So what’s the solution? The answer is simple, play Aubameyang down the middle and let him thrive off service from real wingers. 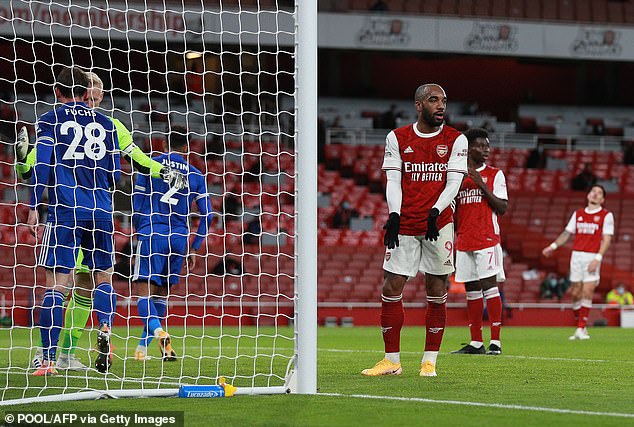 So many of his goals in north London have come from clever movement in the penalty area but on the flanks, he is lacking the opportunity to make a huge impact in the box.

Aubameyang’s best moment of the game against Leicester came when he chipped in a delightful cross to the back post for Hector Bellerin to smash towards goal on the volley. But it should be role reversal, Arsenal’s star striker should be the one running onto the end of crosses.

Arsenal may have dictated the tempo for the majority of Sunday’s game but it says a lot about their performance when their most creative players were defenders.

The source of Arsenal’s best attacks came through left back Tierney and centre back David Luiz, whose injury in the second half impacted the game.

Luiz was continuously finding Tierney with diagonal balls from the heart of defence out to the left flank. The Scotland international would then whip one of his ferocious deliveries into the area. However, there was no Arsenal player on the end of his probing crosses.

Another one of Luiz’s trademark balls is the one over the top down the right in behind the opposition defence, a move that worked well occasionally against Leicester. 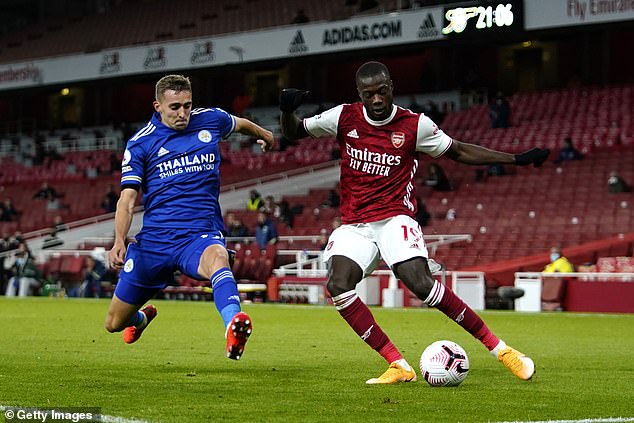 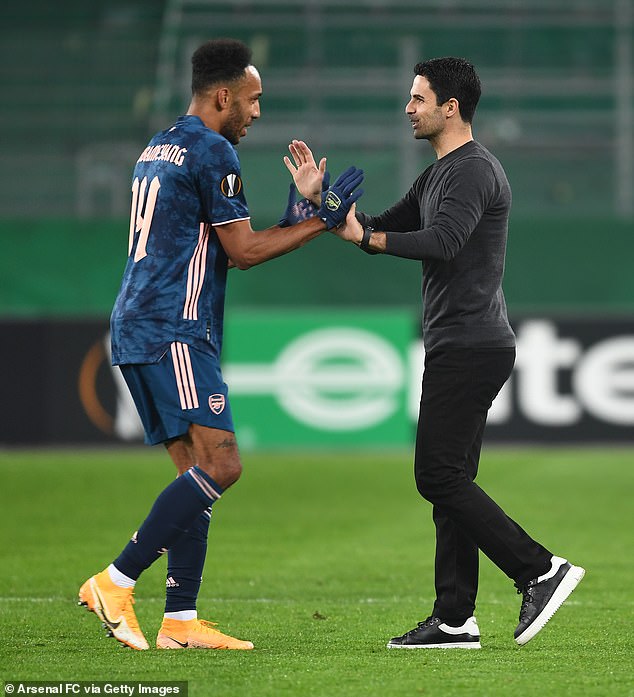 But the truth of the matter is that this identity of attack isn’t sustainable in the long run. Arteta’s most creative players CANNOT be defenders.

Arteta showed he was ruthless when it has came to Mesut Ozil’s exclusion from his Premier League and Europa League squads but now it’s time to do the same in attack. It’s not working and Lacazette currently isn’t offering anything.

Aubameyang up top with either Willian, Nicolas Pepe or Bukayo Saka alongside him on the flanks should be the way forward.

The Gunners need to keep that pace on the flanks to get in behind opposition defences, while feeding off the midfield trio, with Aubameyang making his constant dangerous runs late on in the penalty area.

Arsenal have spent a massive £181million on Aubameyang, Lacazette and Pepe combined, and it’s hugely alarming how the side look completely out of sorts in attack with such big-money signings at their disposal.

If Arsenal are to have any hope of claiming a Champions League spot come the end of the season then their attack must improve dramatically with Aubameyang at the heart of proceedings. If not, it could get worse before it gets better in north London.