Arsonist, 19, avoids jail after torching two buildings when dared by a friend


A teenage arsonist who torched two buildings when dared by a friend has avoided jail after a judge said a custodial sentence would harm his mental health.

Luke Edwards-Meredith burned down a vacant barber’s shop next to the landmark old Central Hotel building in Birkenhead.

Just an hour later, the then 17-year-old boy set fire to the former Hotel California and Revolver pub next to Birkenhead Tunnel.

Half of Merseyside Fire and Rescue Service’s entire resources had to be called upon to tackle the two blazes, Liverpool Crown Court was told.

But a judge accepted his ADHD played a key part in the arsons and locking him up would harm his mental health.

Edwards-Meredith was instead handed eight months’ detention, suspended for two years, with a 25-day Rehabilitation Activity Requirement and 100 hours of unpaid work. 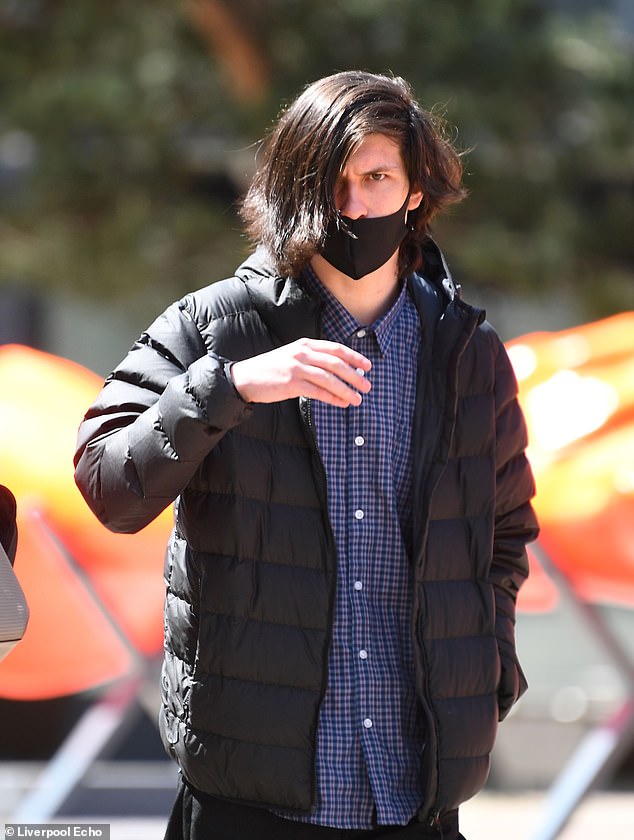 Luke Edwards-Meredith (pictured) torched two buildings when dared by a friend, but has avoided jail after a judge said a custodial sentence would harm his mental health

Firefighters, police and ambulance were called to the barber’s shop, in Clifton Crescent, just after 5pm, on Saturday, August 24, 2019.

Kate Morley, prosecuting, said police had received information about a ‘suicidal male’ who planned on going into the building.

The fire raged from the first floor of the two-storey building to the roof, causing ‘severe damage’, and 29 members of the public rang 999.

The area was cordoned off and roads closed as crews with four fire engines and an aerial appliance established no one was inside.

Firefighters tackled the blaze for more than five hours and it caused £35,000 of damage to the building, which was left structurally unsafe.

Damage was also caused to two adjoining flats to prevent the fire spreading and there were major traffic problems in the area.

While that fire raged, reports came in just after 6pm of another blaze at the old Royal Castle bar, about half a mile away.

That fire spread from the first floor to the roof of the four-storey building and police had to close major roads near the tunnel.

It took more than seven hours, eight fire engines and an aerial appliance to put out the fire.

The court heard that building was set for demolition and the value of the damage was ‘unquantified’.

She said: ‘That equates to half of all Merseyside Fire and Rescue Service’s fire appliances immediately available for response and caused significant strain on resources available to attend other incidents.’ 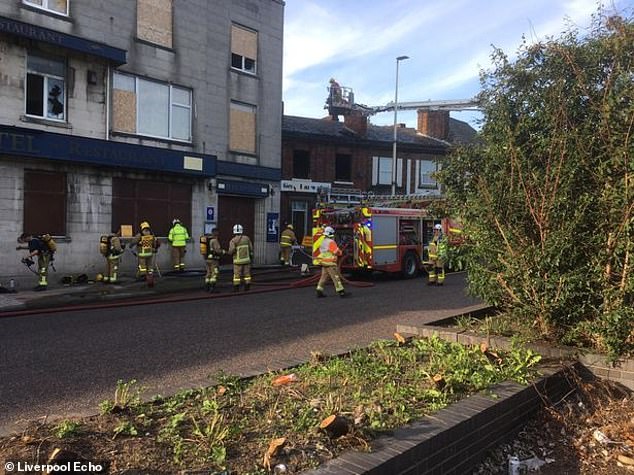 A member of staff at The Hive Youth Zone in Wirral contacted police to say children said Edwards-Meredith and perhaps another boy were responsible.

Officers arrested Edwards-Meredith who replied ‘I was near the place but I didn’t do anything’ and was carrying a lighter.

Ms Morley said police spoke to his mother, who said she ‘felt he was responsible’ and ‘would have sudden outbursts and cause damage to their home’.

Edwards-Meredith confessed to starting both fires in an interview, but said a friend had ‘dared him’ to start a fire.

He said he got in the barber’s through a window, sat down to calm down, but was angry and couldn’t calm down, so went in a kitchen and lit paper.

Ms Morley said he claimed not to intend to burn the building down, but ‘when he looked at the fire constantly it did have the effect of calming him down’.

Edwards-Meredith said he went to The Hive and spoke to friends about starting the fire, then went with friends to the old bar and got in via a broken fence.

He said he set fire to wood, wallpaper and a towel, then ran out when it was ‘out of control and he couldn’t put it out’.

Edwards-Meredith, now 19, of Walker Street, Birkenhead, who has no previous convictions, admitted two counts of arson causing damage to property.

A then 16-year-old boy also arrested over the fires was released without charge.

Ms Morley said Edwards-Meredith wasn’t charged until February 3 this year and ‘there isn’t a satisfactory explanation that the prosecution can put forward’.

She said the first police officer in the case retired; a second officer took over in December 2019; police couldn’t contact the owners of the barber’s in Saudi Arabia to ask what was in the building; forensic examination of his lighter – which proved inconclusive – took place; there were delays due to the pandemic; and a child witness at The Hive died.

John Weate, defending, said his client admitted what he did immediately that day and the delays were ‘intolerable’.

He said the police and CPS could have had Edwards-Meredith charged and before the youth court in 2019, when he would have been given a Youth Referral Order (YRO) and assisted with his ‘issues’.

Mr Weate said that would have been spent when his YRO finished, but now his two convictions for arson would follow him throughout adult life.

He said Edwards-Meredith was diagnosed with ADHD early in his childhood, which ‘leads to impulsivity and leads to acting without thought’. 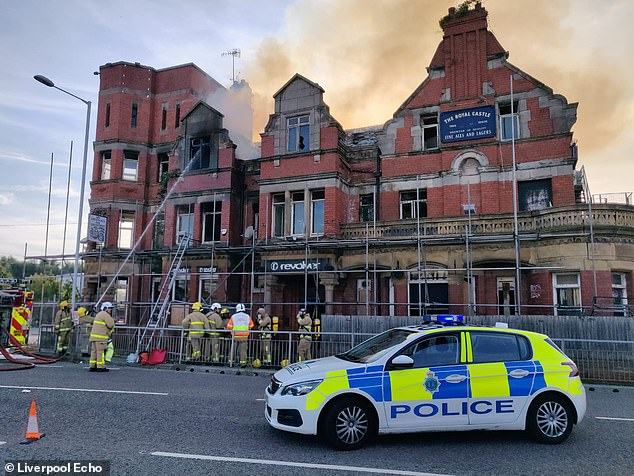 Just an hour later, the then 17-year-old boy set fire to the former Hotel California and Revolver pub next to Birkenhead Tunnel

Mr Weate asked the judge to take into account his age, immaturity, ‘troubles’, the two-year delay and its impact on him and that he had kept out of trouble since, and to spare him jail.

He said Edwards-Meredith had since decided not to socialise and stay at home, which he thought was the ‘safest’ thing to do, but now had a girlfriend and hoped to get a job.

Judge Brian Cummings, QC, said what the teenager did was ‘very serious’, but he had to sentence him based on his age at the time and accepted ‘that immaturity played a part in what you did’.

He told Edwards-Meredith a central feature of his ADHD was ‘impulsivity’, there was ‘a lack of reflection on the consequences of what you were about to do’, and said: ‘Impulsivity was a key feature in the commission of these offences.’

Judge Cummings said a psychiatric report found ‘there would be significant risks in terms of deterioration of your mental state were you to be sent into custody immediately’.

The judge handed him eight months’ detention, suspended for two years, with a 25-day Rehabilitation Activity Requirement and 100 hours of unpaid work.

He said he would have made a compensation order, but Edwards-Meredith had ‘no significant means’ to pay it.

The Pentagon: We may deploy our strategic bombers in Norway at any moment

Voters in the nation's most populous city head to the polls Tuesday to choose a new...