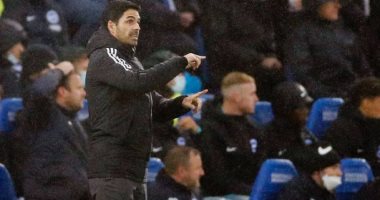 Arsenal coach Mikel Arteta confirmed that the Gunners deserved no more than a point against Brighton, in the match that ended in a goalless draw, at Falmer Stadium, in the seventh round of the English Premier League competition for the current season.

“I think it was a point earned because I don’t think we deserve anything more,” Arteta said, in comments after the end of the match.“.

He added, “We struggled to get out of their pressure, man to man, from the start, and we lost a lot of duos that cost us attacking the empty spaces in their defense.”

He continued: “I am not at all happy with the result of the equalizer, we performed a good defensive performance in the last 15-20 meters from the field, but overall we failed to get out of the opposition’s pressure.”

The Egyptian international, Mohamed Elneny, was on the Arsenal bench throughout today’s match, as the coach of the Gunners, Mikel Arteta, did not involve him..

With this result, Arsenal occupies ninth place in the English Premier League table with 10 points, collected from 3 victories, 3 defeats and a draw, while Brighton occupies fifth place with 14 points..

After losing the first three matches of the Gunners in the English Premier League this season, he rose up dramatically, achieving three victories in a row at the expense of Norwich City, Burnley, and finally neighbor Tottenham in the London derby..

Arsenal was absent in today’s match, the captain of the team, the Swiss Granit Xhaka; Due to a knee injury, he will be out of action for about 3 months.

The latest shoe designs for fall-winter 2022, most notably crystal-encrusted shoes

A recent study: Yogurt and cheese are good for heart health.. know why