Tiny artificial lungs grown in a lab from adult stem cells have allowed scientists to watch how coronavirus infects the lungs in a new ‘major breakthrough’.

Researchers from Duke University and Cambridge University produced artificial lungs in two independent and separate studies to examine the spread of Covid-19.

The ‘living lung’ models minimic the tiny air sacs that take up the oxygen we breathe, known to be where most serious lung damage from the deadly virus takes place.

Having access to the models to test the spread of SAS-CoV-2, the virus responsible for Covid-19, will allow researchers to test potential drugs and gain a better understanding of why some people suffer from the disease worse than others. 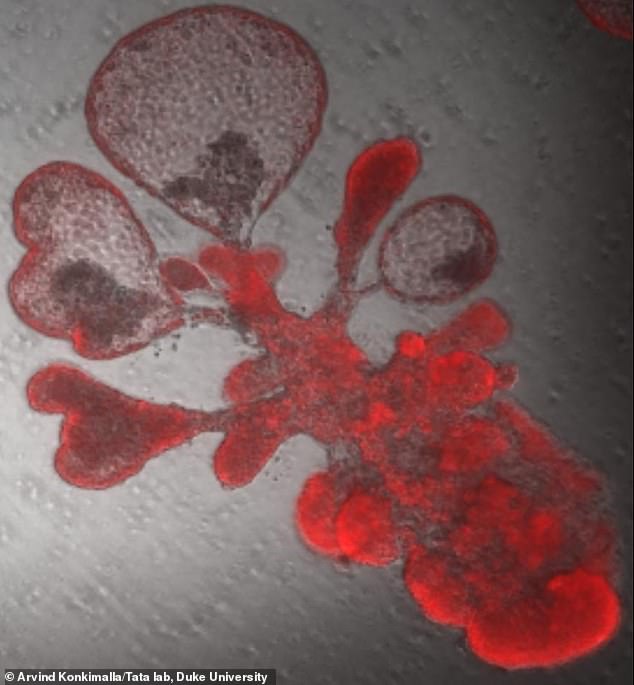 In both studies the 3D min-lung models were grown from stem cells that repair the deepest portions of the lungs when SARS-CoV-2 attacks – known as alveolar cells.

To date, there have been more than 40 million cases of COVID-19 and almost 1.13 million deaths worldwide.

The main target tissues of SARS-CoV-2, especially in patients that develop pneumonia, appear to be alveoli, according to the Cambridge team.

They extracted the alveoli cells from donated tissue and reprogrammed them back to their earlier ‘stem cell’ stage and forced them to grow into self-organising alveolar-like 3D structures that mimic the behaviour of key lung tissue. 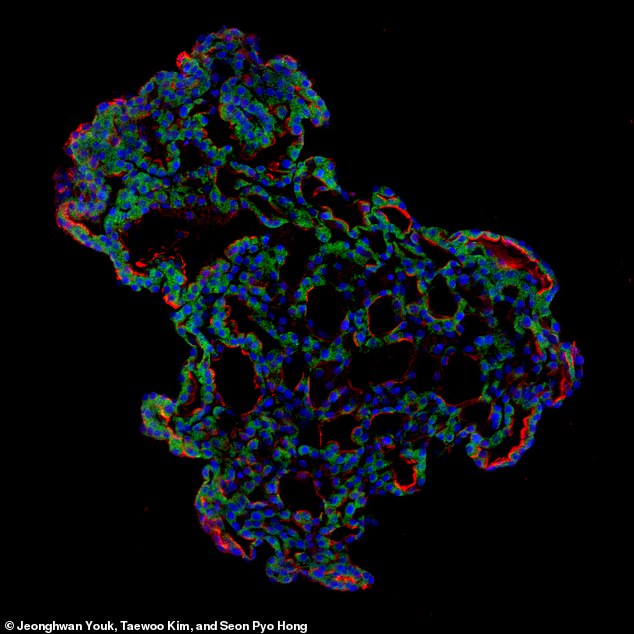 ‘Our approach has allowed us to grow 3D models of key lung tissue – in a sense, “mini-lungs” – in the lab and study what happens when they become infected.’

Duke researchers took a similar approach. The team, led by Duke cell biologist Purushothama Rao Tata, say their model will allow for hundreds of experiments to be run simultaneously to screen for new drug candidates.

‘This is a versatile model system that allows us to study not only SARS-CoV-2, but any respiratory virus that targets these cells, including influenza,’ Tata said.

Both teams infected models with a strain of SARS-CoV-2 to better understand who the virus spreads and what happens in the lung cells in response to the disease.

The Cambridge team worked with researchers from South Korea to take a sample of the virus from a patient who was infected in January after travelling to Wuhan.

Using a combination of fluorescence imaging and single cell genetic analysis, they were able to study how the cells responded to the virus.

When the 3D models were exposed to SARS-CoV-2, the virus began to replicate rapidly, reaching full cellular infection just six hours after infection.

Replication enables the virus to spread throughout the body, infecting other cells and tissue, explained the Cambridge research team.

Around the same time, the cells began to produce interferons – proteins that act as warning signals to neighbouring cells, telling them to activate their defences.

After 48 hours, the interferons triggered the innate immune response – its first line of defence – and the cells started fighting back against infection.

Sixty hours after infection, a subset of alveolar cells began to disintegrate, leading to cell death and damage to the lung tissue. 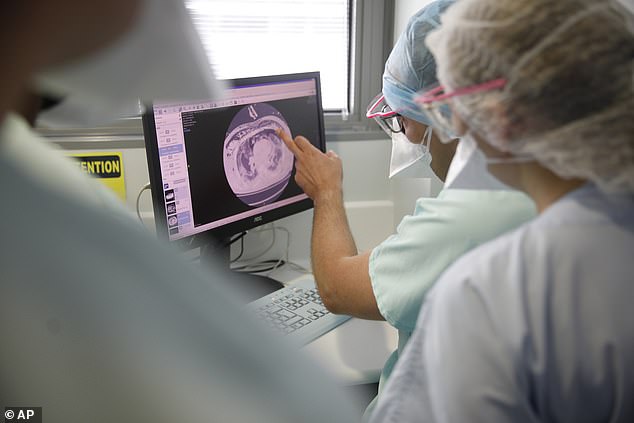 Researchers hope that by better understanding how SARS-CoV-2 infects the lungs through their mini-models, they can treat patients with the worst symptoms of the Covid-19 disease

Although the researchers observed changes to the lung cells within three days of infection, clinical symptoms of COVID-19 rarely occur so quickly and can sometimes take more than ten days after exposure to appear.

The team say there are several possible reasons for this. It may take several days from the virus first infiltrating the upper respiratory tract to it reaching the alveoli.

RESEARCHERS GROW A ‘MINI LUNG’ IN LAB TO STUDY COVID-19

Cambridge and Korean scientists wanted to better understand how SARS-CoV-2 infects the lungs and causes disease.

To do this they turned to organoids – ‘mini-organs’ grown in three dimensions to mimic the behaviour of tissue and organs.

By reprogramming these cells back to their earlier ‘stem cell’ stage, they were able to grow self-organising alveolar-like 3D structures that mimic the behaviour of key lung tissue.

A similar project using the same process was carried out by a team from Duke University in the US.

The organoids are grown from alveolar epithelial type-2 cells (AT2s) which are the stem cells that repair the deepest portions of the lungs where SARS-CoV-2 attacks.

In both studies, published in Cell Stem Cells, the result is a purely human organoid without any helper cells.

Mini-lungs grown in tiny wells will enable high throughput science, in which hundreds of experiments can be run simultaneously.

These can be used to screen for new drug candidates or to identify self-defense chemicals produced by lung cells in response to infection.

It may also require a substantial proportion of alveolar cells to be infected before a patient displays symptoms, explained co-author Dr Young Seok Ju from the Korea Advanced Institute of Science and Technology.

Dr Young said it could also require further interactions with immune cells resulting in inflammation before symptoms are visible.

‘We can tackle many unanswered key questions, such as understanding genetic susceptibility to SARS-CoV-2, assessing relative infectivity of viral mutants, and revealing the damage processes of the virus in human alveolar cells,’ he said.

‘Most importantly, it provides the opportunity to develop and screen potential therapeutic agents against SARS-CoV-2 infection.’

‘We hope to use our technique to grow these 3D models from cells of patients who are particularly vulnerable to infection, such as the elderly or people with diseased lungs, and find out what happens to their tissue,’ added Dr Lee.

The Duke team will use their 3D lung model alongside other techniques, such as changing any nucleotide of the Covid-19 virus’s genetic code at will.

They were able to adapt it to produce a ‘glowing version’ of the virus so that it would reveal exactly where it went in the mini-lung model.

Like the Cambridge researchers, the Duke team found that when infected with the virus, the organoids were shown to launch an inflammatory response mediated by interferons.

The researchers have also witnessed the cytokine storm of immune molecules the lungs launch in response to the virus.

‘It was thought cytokine storm happened due to the large influx of immune cells, but we can see it also happens in the lung stem cells themselves,’ Tata said.

‘We’ve only been able to see this from autopsies until now,’ Tata said. ‘Now we have a way to figure out how to energize the cells to fight against this deadly virus.’

Ralph Baric, co-author of the Duke paper, said he’d be using the mini-lungs to better understand a new strain of SARS-CoV-2 called D614G that has become the dominant version of the virus.

This strain, which emerged in Italy, has a spike protein that makes it more infectious.

The Cambridge University and Duke University papers have been published in the journal Cell Stem Cells.

WHAT ARE STEM CELLS?

Stem cells are a basic type of cell that can change into another type of more specialised cell through a process known as differentiation.

Think of stem cells as a fresh ball of clay that can be shaped and morphed into any cell in the body – including bone, muscle, skin and more.

This ability means they have been the focus of lots of medical research in recent decades.

They grow in embryos as embryonic stem cells, helping the rapidly growing infant form the millions of different cell types it needs to build before birth.

In adults they are used as repair cells, replacing those we lose through damage or ageing.