As Boris Johnson aims for new cars to be electric by 2030, Congolese miners risk lives for cobalt


The pitiful image was like something from centuries ago rather than our advanced, technological age.

In front of me, struggling up a hill, was an 11-year-old boy called Daniel, covered in dust and carrying 30lb of metallic rock in a sack on his back.

When other children his age would usually be playing at school, Daniel was acting as a human mule as he dragged his heavy cargo from a digging site to a depot where he hoped to sell it to Chinese traders.

In fact, he had never attended school at all, he told me. Poverty and survival were the central themes of his existence. Child workers like him can expect to receive as little as £1.50 per day of back-breaking toil.

I came across Daniel in 2018 while on a photographic assignment investigating the cobalt mining industry in the Democratic Republic of the Congo (DRC), working alongside the journalist Vivienne Walt. 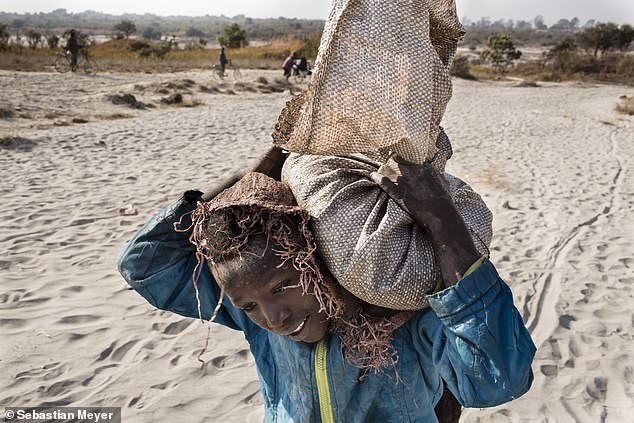 Daniel, 11, carries cobalt on his back in Kolwezi, Democratic Republic of the Congo. He works in a mine ferrying sacks to a depot. Cobalt is a vital mineral needed for rechargeable batteries

The DRC, in the heart of Africa, is a country that has long been scarred by deprivation, corruption and communal violence.

But it is also rich in minerals, particularly cobalt, a key component of the lithium-ion batteries that power mobile phones, computers, tablets — and electric cars.

Indeed, our digital lives would be impossible without cobalt. The soaring global appetite for this mineral has enriched a select host of commercial operators in the DRC, which has around two-thirds of the world’s cobalt deposits. But the distribution of the wealth from this burgeoning trade has become grossly imbalanced.

Those at the top may have made a fortune — just as the oil barons and Arab states did in the 20th century — but, as we discovered, those at the bottom are viciously exploited. 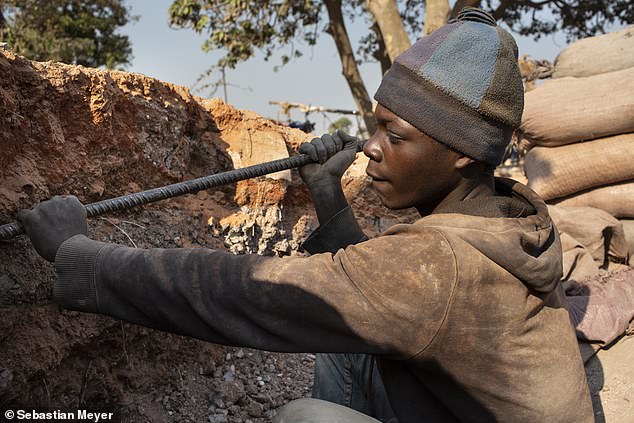 A young miner digs for cobalt inside the Congo DongFang International Mining Kasulo mine. Batteries needed for phones, computers and electric cars have pushed demand for cobalt

Meagre pay, dangerous conditions and long hours are all part of the cruel narrative.

Shamefully, we in the West enable this hypocritical inhumanity through indifference, or just plain ignorance. We reassure ourselves that we are being virtuous by switching to an electric car, for instance, because it is better for the environment than dirty fossil fuels. But we fail to recognise the suffering and abuse behind smart technology.

In much of DRC’s cobalt industry, there is little sign of corporate responsibility or social justice, the qualities that are meant to infuse environmentalism.

Earlier this week, Boris Johnson hailed a 10-point plan for a ‘Green Industrial Revolution’ — with the electric car at its centre. The sale of all new petrol and diesel vehicles is to be banned from 2030, in a move the Prime Minister said ‘will transform the way we live in the UK’.

But by boosting the demand for electric cars, and thus for cobalt, Britain’s green revolution will only exacerbate the destitution and maltreatment in DRC — unless, of course, there is a radical shift in the way the industry is run. 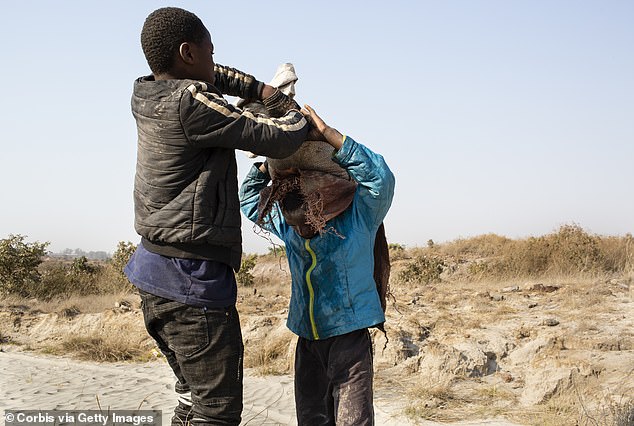 An older boy places a sack of cobalt on Daniel’s back. Two thirds of the world supply is located in southern Congo where men, women and children all work

Each electric car battery requires up to 18lb of cobalt — a thousand times as much as a smartphone.

Volkswagen has said it will probably have to build six new battery factories within the next ten years to supply its electric car plants.

And an authoritative study by cobalt trading company Darton Commodities has estimated that the demand from battery manufacturers for cobalt could reach 357,000 tons per year by 2030, seven times the current level.

That might be good news for the corporations, bureaucrats and politicians who control the supply lines in DRC, but it is truly terrible for those working on the front line — including children like Daniel.

Under-age mining is meant to be illegal in DRC, so no official figures exist on how many children work in the industry. But one expert in Lualaba province told us that there are 10,000 of them.

As well as Daniel, we met Lukasa, 15, who worked six days a week, leaving his family’s mud-brick home at 5am to begin the two-hour walk to a mining site, where he then spent six long hours hacking away in a hole to gather enough cobalt to fill his sack.

At around 3pm each day, having accumulated more than 20lb of the mineral, he left the site and walked for an hour to a trading market dominated by buyers from Chinese commodity companies.

Incredibly, many child labourers earn far less and are even younger.

‘When kids are not at school, they all work in the mines.’

Understandably, the Congolese Government wants to keep these unethical operations hidden: access to sites is regularly blocked and there were attempts to stop us from talking to workers. Ministers prefer to spread their propaganda about how well-regulated the state-run industry is. 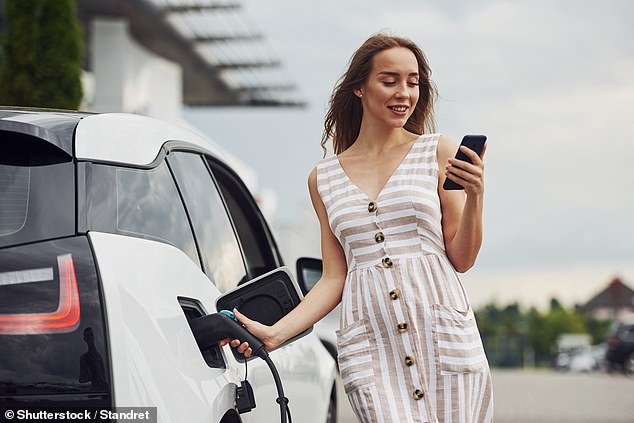 Earlier this week, Boris Johnson hailed a 10-point plan for a ‘Green Industrial Revolution’ — with the electric car at its centre. File photo of a woman charging an electric car

But they cannot disguise the dreadful reality, particularly in the informal, non-regulated and so-called ‘artisanal’ section of the industry that accounts for 20 per cent of DRC’s cobalt output.

For most people in Britain, ‘artisanal’ is a positive term, redolent of a vibrant local farmers’ market or a fashionable bakery. But when used by Congolese cobalt miners, it has a much darker meaning.

The ‘artisanal’ sector, where an estimated 150,000 miners work, is a place beyond the already meagre state-regulation.

It is a realm beyond all compassion, where the intense drive to meet demand has created a Dickensian world of degradation, in which danger is never matched by reward. I saw for myself how miners had to scrabble down into darkened, makeshift holes running deep into the ground, the walls of the bright red earth only held in place by flimsy, wooden props.

Tunnels regularly collapse. In June 2019, 43 ‘artisanal’ miners in Lualaba died when part of a pit caved in at a mine owned by the Swiss conglomerate Glencore.

It is no exaggeration to say these impoverished Congolese men are literally dying — or enduring a living hell — to supply the West’s high-tech hunger, which is coated in ‘greenwash’ and eco-rhetoric to conceal its negative impact.

I saw miners barefoot despite the harshness of the terrain, with no proper equipment, operating ropes that plunged deep into the ground made out of nothing more than plastic bags tied together.

There were no lights, no safety helmets, no drills. They just had to use shovels or their bare hands.

There are tragic ironies at play here. These men are toiling to feed the ravenous appetite of the West for the latest gadgets and greenest cars, yet they are denied even the most basic technology themselves. Many of these miners live in mud-brick homes without electricity, yet their work is largely based on the West’s new focus on going electric.

Handled differently, the vast cobalt resources could have been a boon to the people of the DRC.

Instead, it is the plutocrats and foreign dealers who have benefited in an obscene fashion. And too few people in Europe and the U.S. seem willing to face the downside of the switch to electricity.

Dressed up as a move that saves the planet, it is causing real damage to the Congolese.

In 2016, Amnesty International damned more than 20 international electronics and car companies — all of which relied on cobalt from the DRC — for failing to ensure they were not involved with child labour or corruption.

But Amnesty also partly blamed us, the public, saying: ‘Millions of people enjoy the benefits of new technologies, but rarely ask how they are made.’

Aside from the human cost, there is another unintended consequence of our eco-drive.

In a bitter paradox, the environment itself is being harmed by the new demand for earth metals such as cobalt to power green technologies including electric vehicles, smart meters and wind turbines.

Digging for these metals turns out to be just as damaging as drilling for oil and gas: in China, toxic wastelands have been created in some mineral-rich regions, leading to soaring rates of cancer and other diseases.

In one chilling incident, a lake of black sludge, five miles wide, formed near the city of Bautou, killing huge numbers of animals and crops.

There are now also plans to begin mining metals over thousands of square miles on the sea floor, including in the Indian and Pacific Oceans. But if that happens, marine organisms will be killed on an epic scale, food chains will be destroyed and some species will face extinction.

One recent German study, Disturbance And Recolonisation, ploughed up an area of sea floor in the Pacific and demonstrated that it took at least seven years for marine life to recover.

So what is the solution?

Some have advocated that manufacturers should abandon cobalt altogether.

Indeed, there are signs that this is beginning to happen: one Chinese company now produces batteries using phosphate instead of cobalt, while the billionaire entrepreneur Elon Musk announced in 2018 that his firm Tesla would stop using cobalt in its next generation of electric car batteries.

But that is no solution for the Congolese. Ending cobalt production will just worsen their poverty. Families will struggle even more.

A far better response is to have a properly regulated, well-rewarded industry, with checks to improve safety and stop child exploitation for good.

Europeans and Americans could also help by putting pressure on suppliers for real change: but for that to happen, there has to be far greater awareness that the switch to electricity is not a guilt-free choice.

We cannot cocoon ourselves in green righteousness.

Too many of us in the West are enjoying power without responsibility. And the price of our delusion is paid for by children like Daniel and Lukasa.