Argento, one of the early accusers of disgraced movie mogul Harvey Weinstein, made the allegations in an interview with Italian newspaper Il Corriere della Sera and other Italian media over the weekend.

‘It’s the first time I’m talking about Cohen,’ she said, according to Variety. ‘He abused me, making me drink GHB – he had a bottle of it,’ she said, referring to the anaesthetic drug often used in date rapes.

‘At the time, I really didn’t know what it was. I woke up in the morning naked in his bed.’

In a texted statement to Variety, Argento confirmed the details of her allegation, adding that she discusses it in her forthcoming autobiography, Anatomy of a Wild Heart, due to be released in Italy later this month. 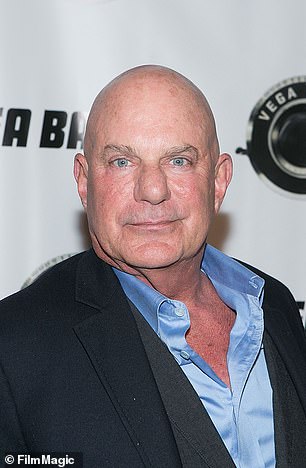 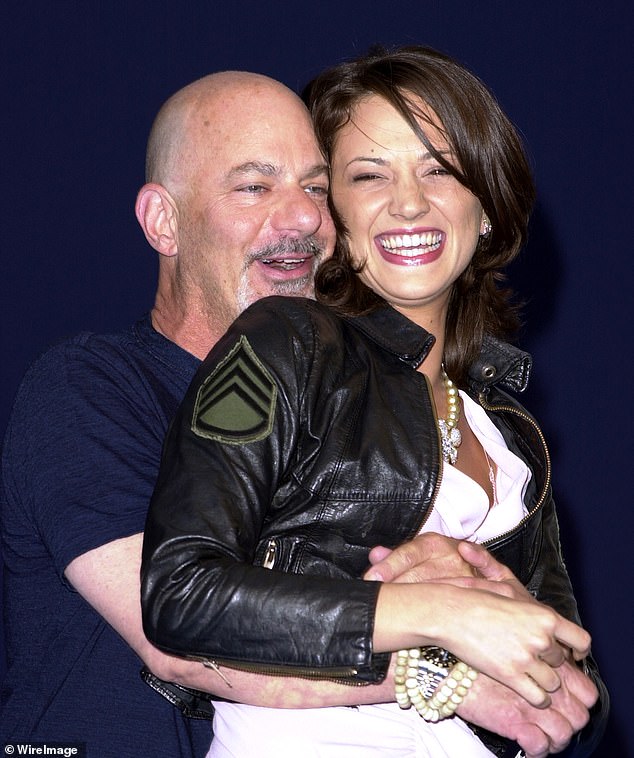 During her conversation with the Italian media, Argento claimed she was initially unsure what had happened to her when she was allegedly drugged and raped by Cohen.

‘I discovered later, speaking with a friend who opened my eyes about that substance [GHB],’ she said.

Argento said she refrained from speaking about the alleged assault at the time, and in the years after, because she ‘did not want to create another storm.’

However, ‘since two women have spoken against [Cohen], including his daughter,’ she said she felt encouraged to come forward.

Responding to Argento’s claims, a spokesperson for Cohen, 71, vehemently denied there was any truth to them.

‘Mr. Cohen categorically denies the completely false accusation of sexual assault that Asia Argento made against him.’

The spokesperson went on to add that Cohen and Argenton ‘had an excellent working relationship’ during their time working together, and that ‘Cohen considered her a friend.’

‘So this accusation, which dates from 2002, is puzzling, especially considering what has been said about her in recent years.’ ‘He abused me, making me drink GHB – he had a bottle of it,’ she said, referring to the anaesthetic drug often used in date rapes. ‘At the time, I really didn’t know what it was. I woke up in the morning naked in his bed’ The spokesperson’s comments appeared to allude to allegations which surfaced in August 2018, whereby Argento was accused of sexually assaulting fellow actor Jimmy Bennett.

Bennett claimed that incident happened in May 2013, when he was 17-years old, at a hotel in California.

Although she initially denied the allegation and claimed she had no sexual interactions with Bennett, within weeks, she retracted the claims and admitted they did have sex but claims she didn’t know how old he was at the time.

Bennett disputed Argento’s version of events, and she later reportedly paid him $380,000 in ‘hush’ money.

Argento was at the forefront of the #MeToo after claiming she had been sexually assaulted by disgraced mogul Harvey Weinstein.

She was one of the first to go public with her story, telling The New York Times she was allegedly assaulted by Weinstein at the 1997 Cannes Film Festival.

Cohen, also, has previously been accused of sexual assault on at least two occasions. 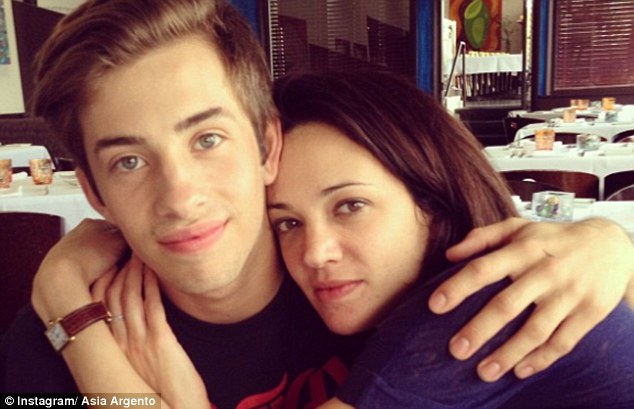 Premiere party: Argento and her alleged rapist Weinstein at the premiere of The Heart is Deceitful at Cannes in 2004 (above)

In 2019, Cohen was accused of allegedly sexually assaulting a victim – identified only as ‘Jane’ – while she was unconscious.

The reported assault was said to have taken place in 2016 after Cohen invited the woman to a business meeting in Manhattan to discuss collaborating on a potential TV pilot.

According to Jane, Cohen picked a cigar lounge for the meeting locale and ordered a drink for her, even though she hadn’t requested one. They then continued the meeting at a restaurant near the hotel where he was staying.

At the restaurant, Jane said, Cohen ordered a carafe of wine and encouraged her to have more to drink.

During the meeting, Jane said that Cohen had flirted with her and told her details about his sex life, although she hadn’t asked about it. She said she ignored Cohen’s comments because she needed the pilot money and was excited about the career opportunity.

Among the other things she remembered about the evening was starting to feel ‘fuzzy,’ being alone with Cohen at the restaurant because the other diners had left, Cohen leaning over to kiss her on the cheek and going to another bar with him.

She said her next memory was regaining consciousness in a bed in Cohen’s hotel room. She said she was naked and that Cohen’s face was in her crotch and that he had inserted his fingers inside her – neither of his acts being activities that she had consented to.

She said she jumped out of bed, went to the bathroom and threw up.

When she stumbled back to the bed, she said that Cohen tried to have sex with her, but that he stopped when she told him to stop. In 2019, Cohen faced similar accusations from his daughter Valkyrie Weather, who accused him of molesting her when she was just two-years-old.

Despite being a social drinker during that period of her life, Jane said that she did not remember drinking enough alcohol to black out or lose consciousness and that the incident ‘did not feel like being very drunk.’

When contacted about the claims, Cohen’s lawyer issued a 13-page denial, calling the allegations ‘outrageous’ and ‘extraordinarily offensive’.

First reported by the Huffington Post, two of Jane’s friends confirmed to the outlet that she had told them about the alleged assault immediately after it happened.

Jane also shared medical records to show she had sought clinical treatment as a sexual assault victim within weeks of her meeting with Cohen taking place.

Earlier in 2019, Cohen faced similar accusations from his daughter Valkyrie Weather, who accused him of molesting her when she was just two-years-old.

Weather, Cohen’s eldest child who is transgender, said: ‘When I was very young, Rob used my body for his own sexual gratification.

‘My mother witnessed one of the assaults when I was between two and two and a half years old, and has since confirmed what she saw. This fact has cost me more than I could ever convey here,’ she said.

Weather went on to accuse her father of raping ‘at least one other woman, in her sleep’ and said he had told her the story as ‘an anecdote’. Weather also claimed her father would take her in her early teens, before her transition, to see sex workers in Thailand and The Czech Republic. Responding to Argento’s claims, a spokesperson for Cohen, 71, vehemently denied there was any truth to them. ‘Mr. Cohen categorically denies the completely false accusation of sexual assault that Asia Argento made against him’

She said that she has been inspired to speak out ‘thanks to the ‘#metoo movement’ and because of therapy and support from loved ones.

‘While Rob will in all likelihood escape criminal justice, I demand that my story be heard. I am not seeking financial restitution, nor do I have a career to promote. My greatest hope is that others who have been hurt by Rob Cohen feel that they are able to come forward as well.’

In a statement, Cohen, a father of four, once again denied the allegations against him, calling his daughter’s claims categorically untrue, ‘painful’ and that his ‘beloved child has accused me of the most awful thing imaginable.’

‘When Valkyrie’s (Kyle at the time) mom and I were getting divorced, she accused me during the custody court proceedings of many things, including a similar accusation to this one. After a very long trial, the court appointed psychiatrist awarded me full custody, in spite of these false accusations,’ Cohen said.

‘Subsequently, my ex-wife appealed, and after another lengthy trial, I was awarded full custody once again. At this point Kyle was about 14 years old, and when asked about his preference on which parent to live with, he chose me,’ the statement read.

‘Recently, my child chose to live her life authentically and transition to the woman she is today. When she wrote me about it, I told her that she has my continued love and support, as well as how beautiful and brave I think she is,’ Cohen continued.

He also denied his daughter’s allegations that he had raped another woman.

‘I may have not been a perfect husband. I am, as all of us are, a person and a parent who has made mistakes along the way, but never ever would I harm any of my children, or any child for that matter,’ Cohen, who has been married a number of times, added.

Cohen, 71, has directed numerous films, including The Fast and the Furious series, The Mummy: Tomb of the Dragon Emperor, The Running Man and Bird on a Wire.

The dark side of OnlyFans: Teen girl has her Instagram pictures targeted by online criminals

New Super Smash Bros. Ultimate Fighter to Be Revealed at the Game Awards 2020

Real Madrid: Vinicius Junior brushes off criticism as part and parcel of playing for Madrid