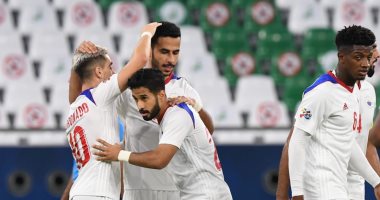 Today, Tuesday, the matches of the sixteenth round of the 2021 AFC Champions League will be completed, which will witness 5 confrontations, most notably the Emirati derby between Sharjah and Al Wahda, as well as the Saudi victory with its Iranian counterpart Traktor.

The Emirati fans are eagerly awaiting a high-caliber Emirati summit that will bring together the Sharjah and Al Wahda teams at Sharjah Stadium, at seven in the evening, in the 2021 AFC Champions League..

Sharjah qualified for the round of 16, occupying the top of Group B with 11 points, beating Traktor, Pakhtakor and Air Force..

While Al Wahda qualified for the 16th round of the Asian Championship, after finishing second in Group E with 13 points, behind leaders Persepolis by two points..

This match is completely out of expectations, especially since each team aspires to reserve a seat in the next round, and both sides have a distinguished group of players, whether local or foreign..

The Sharjah and Al Wahda teams include high-caliber players who can make the difference in any match, regardless of its strength, difficulty or circumstances, most notably Caio Lucas, Bernard, and between Malango in Sharjah, as well as Joao Pedro and Omar Kharbin, the stars of Al Wahda.

The Saudi Al-Nasr Club will also face its Iranian counterpart Traktor, in the round of 16 of the Asian Champions at Khalifa International Stadium in Qatar, at 6:00 Cairo time.

Traktor Club had asked earlier to postpone its match against Al-Nasr due to the outbreak of the Corona virus among the team, or to withdraw without penalties, but the Asian Confederation refused that.

The Iranian team has decided its position that it will not withdraw from the match, and will travel to Doha to face Al-Nassr with only 16 players.

There will be 3 other confrontations, where Nagoya Grampus of Japan will meet his counterpart

South Korean club Daegu at Toyota Stadium at 11 am on Tuesday.

The 2021 AFC Champions League is historic, the tournament system has completely changed this year.

And this season, 40 teams participated in the Champions League group stage instead of 32, half of these teams from West Asia, which includes the Arab countries and the Gulf region, and the other half from the East.

Starting from the price of the final, the confrontations will be played in a two-game knockout system, after the elimination roles were played from one match last season due to the outbreak of the Corona virus, and no team from the West will face another from the East except in the final, as is customary in the largest continent in the world..

The group stage matches of the 2021 AFC Champions League will be played in the combined cycle system, and 5 countries from the east and the same from the west will be selected to host each of the group matches, and the first round matches will be played from 14 to 30 April 2021 for the West, and from April 21 to May 7, 2021 in the East.