A sneaker popular with ‘eshays’ has been slashed to half price at a major shoe chain – and staff admit the ruffian teens are big buyers.

However, staff at Foot Locker store said only the orange colour was reduced in price – and confirmed many buyers could be identified as eshays.

Mainstream buyers prefer the sneakers in black, which is yet to be the subject of any price reduction.

The bright red version of the sneakers have been cut in price to 119.95 (above)

Staff at several Foot Locker stores in Sydney, Adelaide and Brisbane told Daily Mail Australia the orange shoe has been been flying off the shelves since being slashed to half-price last week as part of the retailer’s June markdown sale.

They were unable to say why the black version of the sneaker remains at full price.

An employee at an Adelaide store confirmed the brand was popular among eshays – and said they were flying off the shelves.

But another Sydney employee added the shoe was still hugely popular among a diverse variety of customers because of it comfort.

The 50 per cent sale on the orange sneaker is available online and in-store. 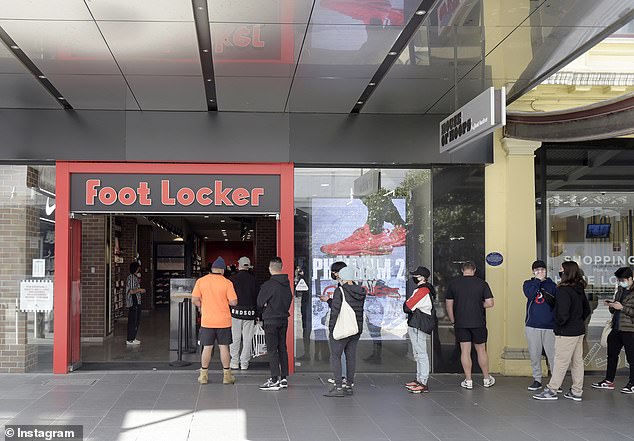 Pictured is a Foot Locker store in Melbourne

Eshay is Australian slang for a particular subculture of teenagers who haunt public places such as train stations and parks stirring up trouble.

They are said to have spread from Sydney’s inner city graffiti scene in the 1980s through housing commission estates and out into the suburbs.

Once predominantly from disadvantaged backgrounds, eshays are now more mainstream and widely promoted on social media.

Favoured labels for the fashionable eshay include Ralph Lauren, Tommy Hilfiger, and Lacoste, paired with Nautica, Adidas, Under Armour and Ellesse.

Euro 2020: Name the England starting line-up against Germany at Euro 96

'I hope England lose in first round of Euros': Laurence Fox joins row over footballers kneeling

Australia's richest postcodes revealed where residents who earn less than $200,000 a year are POOR

Ingraham: The left seeks ‘lockdowns by another name’ as Americans are viewed as ‘disposable commodities’

Vladimir Putin has accused the US of 'persecuting political opinions' for arresting the MAGA mob at...