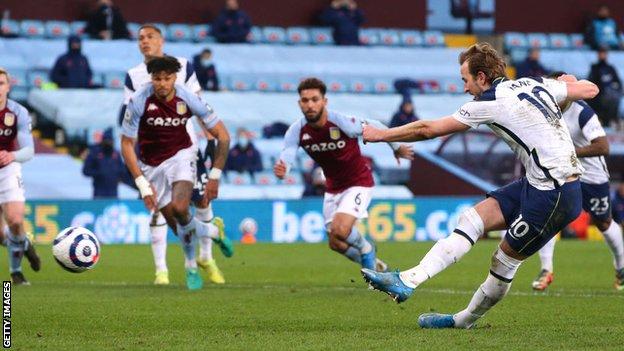 Tottenham responded to their shock Europa League exit in midweek with a hard-fought Premier League victory over Aston Villa that keeps Jose Mourinho’s side in the hunt for a top-four finish.

They were labelled a “disgrace” by captain Hugo Lloris after the 3-0, last-16 second-leg defeat by Dinamo Zagreb on Thursday that saw Spurs throw away a 2-0 aggregate advantage and left their hopes of qualification for next season’s Champions League pinned on their league placing.

But Carlos Vinicius’ opener and Harry Kane’s second-half spot-kick ensured Tottenham made the necessary winning response to climb to sixth in the standings, three points behind Chelsea in fourth.

An interchange of slick passes between Lucas Moura and Kane following a poor clearance by Villa goalkeeper Emiliano Martinez allowed Vinicius to put Spurs ahead from close range after 30 minutes.

And Kane avoided a potentially nervous finish to the game for his side, sending Martinez the wrong way with his penalty after being fouled by Matty Cash.

In the continued absence of skipper Jack Grealish, Villa failed to register a shot until Trezeguet’s blocked attempt after 58 minutes.

The hosts were much improved after the interval, although substitute Anwar el Ghazi’s powerful drive into the side-netting was as close as they came.

Defeat leaves Dean Smith’s side 10th, seven points behind Spurs in the Europa League positions, although they have one game in hand.

'A flying tire ruins a race': Conor Daly feels like Indy 500 was his until bad luck