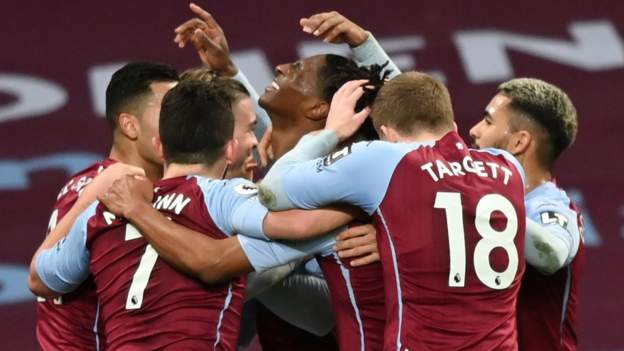 
Aston Villa’s fine run of form continued as they beat Crystal Palace and kept a clean sheet despite playing for more than 45 minutes with 10 men after Tyrone Mings’ sending off.

Villa were already leading when Mings was dismissed by referee Anthony Taylor towards the end of the first half for a foul on Wilfried Zaha – six minutes after both players had been booked for clashing.

In an incident-packed game, Villa claimed an eighth clean sheet of 2020-21 – and moved to within three points of second-placed Leicester City.

Burkina Faso winger Bertrand Traore, who also hit the post, put Villa ahead when he was left unmarked to pounce after Vicente Guaita had beaten away an attempt by Ollie Watkins.

Villa keeper Emiliano Martinez had set the tone for an entertaining match with a fine save to keep out Zaha in the opening minute, while Guaita twice denied Anwar El Ghazi as well as Jack Grealish.

Defender Kortney Hause nodded the second after Watkins had headed against the bar before Dutch winger Anwar El Ghazi lashed home the third with a quality finish.

Having avoided relegation on the final day of last season, Villa are now up to sixth in the table, with two games in hand over Leicester, after making it three wins in four.

Their latest victory was built on grit and a determination not to let Mings’ red card disrupt them.

The England defender can have few complaints about his dismissal, sticking out an arm to block Zaha’s attempt getting away from him, not long after the pair had clashed following a challenge.

If anything, Mings’ loss galvanised Dean Smith’s side, who produced a thoroughly professional performance to win at Villa Park for the first time since thrashing Liverpool 7-2 on 4 October.

Former Chelsea player Traore was excellent before he was substituted earlier than planned following Mings’ dismissal, while the hard-working Watkins twice hit the woodwork and El Ghazi produced a moment of pure class with his goal.

Villa’s recruitment has been impressive. Traore has looked an excellent piece of business, having joined for £17m from Lyon in September, while Martinez – who also cost £17m, from Arsenal – continues to impress in each game.

With his side down to 10 men, Martinez produced a big save to keep out Luka Milivojevic’s deflected attempt.

Both teams have a short turnaround before they are back in action on Monday, with Aston Villa away at Chelsea (17:30 GMT) and Crystal Palace hosting Leicester City at 15:00.