A shirtless man has been filmed being dragged out of his car by cops in a quiet suburban street and beaten with a baton.

A Melbourne woman shared a video online on Thursday of a man sitting idly in his gold station wagon outside her Mitcham home, in the city’s east.

‘What the f*** is happening here,’ she says, peering through her window.

‘This guy is shirtless in his car outside my house. He has been here for about 20 minutes.

‘I watched him get undressed in his car and he is still in the f***ing car!’

A woman in a four-wheel drive pulls up next to the man’s car and gets out to speak with him before returning to her vehicle and driving away.

A short time later, two police officers in facemasks arrive at the scene and try to yank him out of the vehicle.

The man begins honking the horn, prompting the officer to swat his arms away from the steering wheel with a baton.

The officers pull the man from the driver’s seat and attempt to place his arms behind his back as he desperately tries to resist. 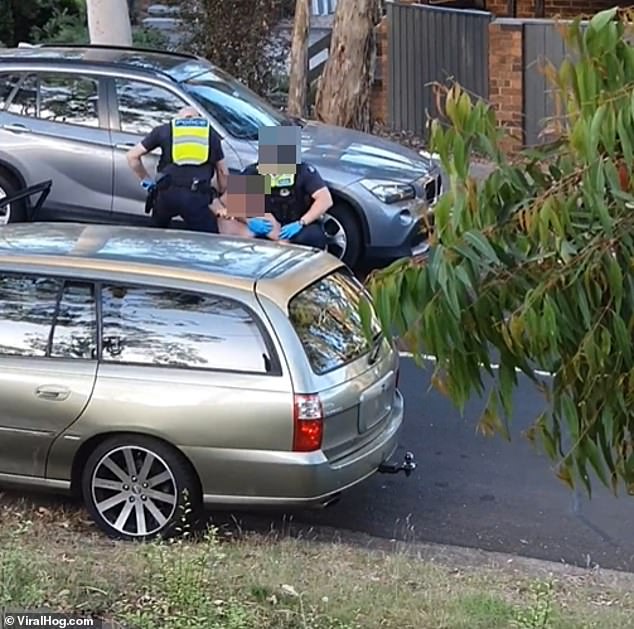 A man (pictured) has been filmed being dragged from his car by police in Mitcham, in Melbourne’s eastern suburbs

The half naked man then grabs a chord attached to one of the officer’s uniforms, as the other policeman pulls him to the ground.

Lying on the road, the man repeatedly screams expletives as the officers tell him to ‘behave himself’.

The man wriggles back up onto his feet but crashes into an adjacent car, leaving a dent in its side panel, as officers pull him back down onto his bottom.

One officer secures him in a headlock, as the pair rest against the damaged four wheel drive.

The man then continuously calls on the officers to ‘leave him alone’ as he is repeatedly ordered to lay on the ground.

‘I’m so tired!’ the man cries out, as the officers lower him face down onto the pavement.

The clip ends with the man continuing to struggle with police, causing his pants to fall down and expose his underwear. 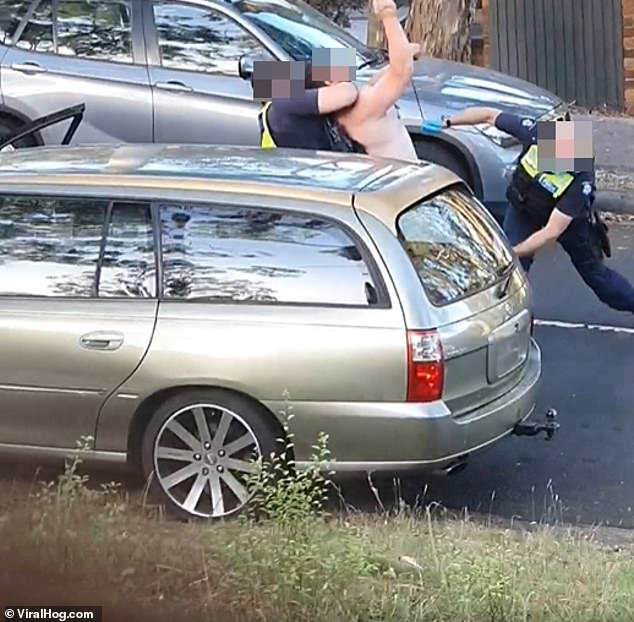 The man could be seen pulling a chord attached to an officer’s uniform, as the other policeman tried to lay him down

Half of the bridges on our roads are in a 'poor' condition, official figures suggest