Six people were killed and ten injured in a mass shooting in California’s capital city early Sunday morning as a gunman with an automatic rifle opened fired on a group of revelers fighting outside a bar.

Sacramento police said shots rang out near 10th and J Streets, about two blocks from the capitol building, around 2am, prompting officers to rush to the scene.

When police arrived to the area, known for its strip of nightclubs and bars, the found a large group gathered and six dead in the street. Ten other victims were transported to area hospitals by ambulance and private vehicles. Their conditions remain unknown.

Police Chief Kathy Lester, noting the investigation is still ‘very preliminary,’ said it is unclear if the victims were deliberately targeted, The Sacramento Bee reported.

Lester, calling the shooting ‘a really tragic, unfortunate situation,’ said the ‘complex and complicated’ is now ‘secure’ but the gunman remains at large. She has asked for the public’s help in identifying the suspect or suspects responsible for the tragedy. 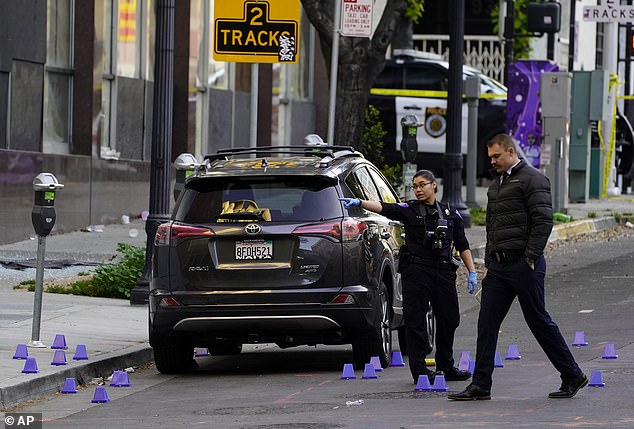 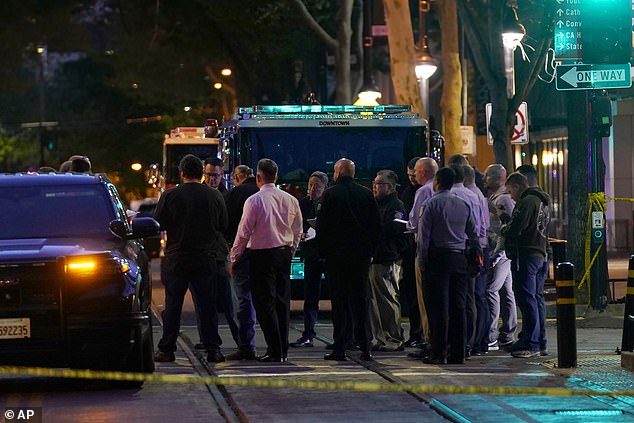 Sacramento police said shots rang out near 10th and J Streets, about two blocks from the capitol building, around 2am. A gunman with an automatic rifle opened fired on a group of revelers fighting outside a bar 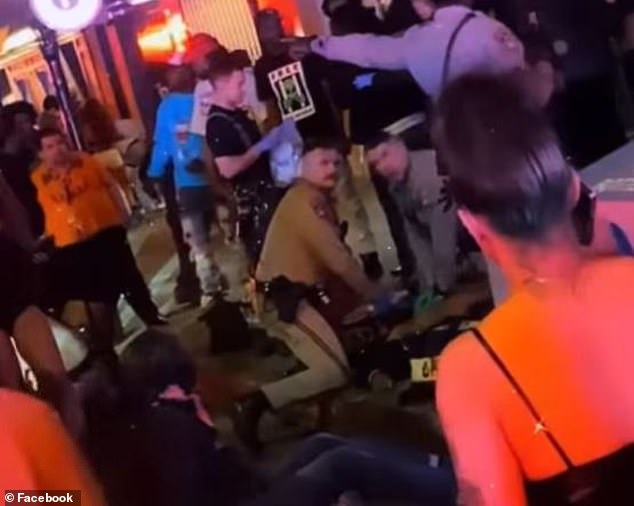 Public Safety News, an independent media agency that responded to the scene, reported that shots were fired around 2am, shortly after last call for bars in the area.

There are ‘victims all over the corner,’ a PSN journalist said in a Facebook live report.

Witnesses reported seeing a person in a car pull out an automatic weapon and begin shooting into a crowd gathered outside the El Santo Restaurant & Ultralounge.

Multiple ambulances responded to the scene as paramedics provided CPR and other treatment to victims on the sidewalks while authorities ushered crowds of people to safety. 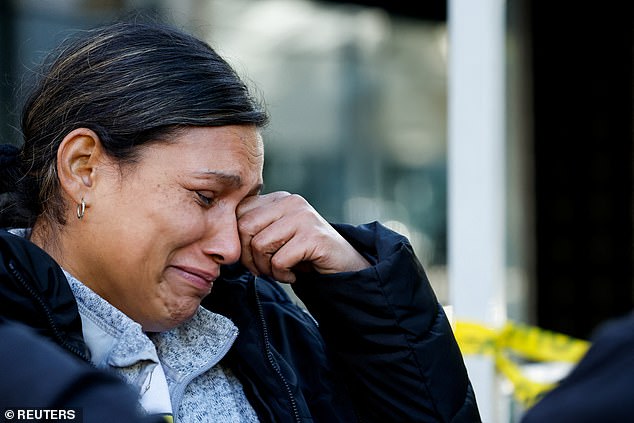 Leticia Fields-Harris, who believes her husband Sergio Harris, 38, died in the mass shooting is seen crying near at the crime scene on Sunday morning 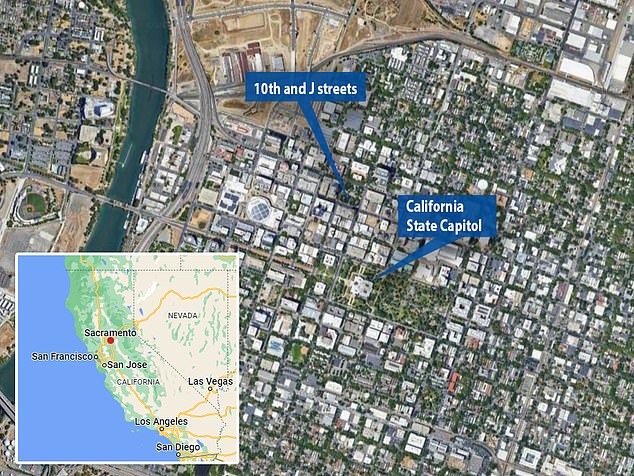 The shooting took place in the area of 10th and J Streets, not far from the state capitol building 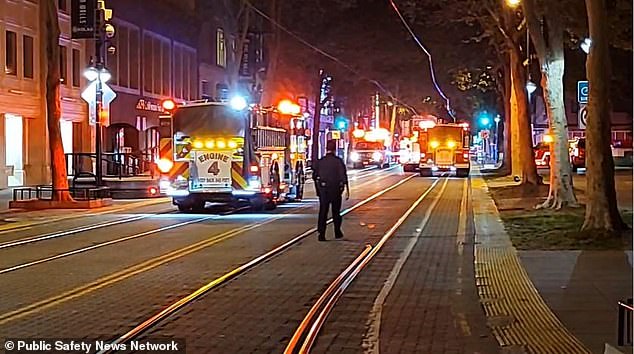 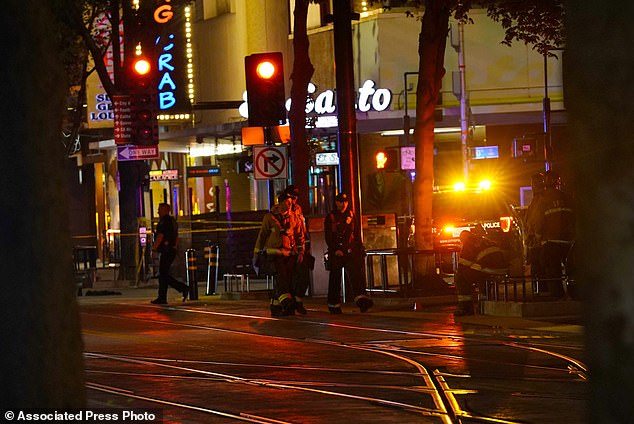 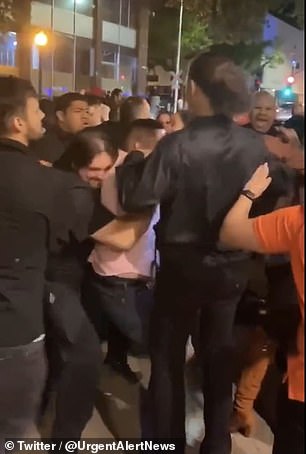 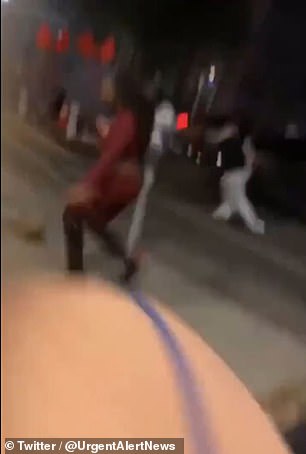 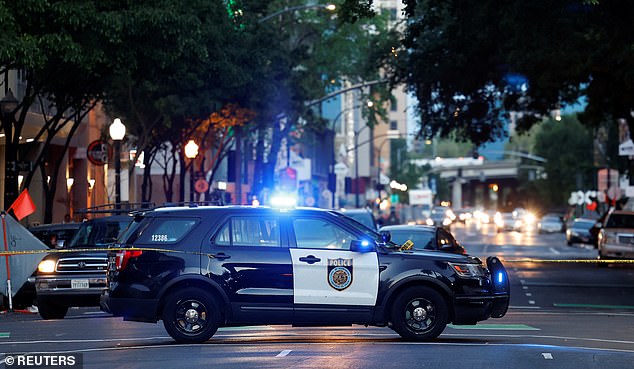 Bystanders told California-based reporter Malik Earnest they heard more than fifty shots ring out before the gunman’s vehicle screeched away from the chaotic scene.

One of the videos shows multiple people fighting on the sidewalk as rapid gunfire strikes, prompting people to run through the streets.

Video posted to Snapchat shows first responders of Sacramento Fire Department and law enforcement on scene of a multi-casualty incident in the Downtown area of Sacramento. Witnesses report hearing more than fifty gunshots followed by a car screeching away from the scene. pic.twitter.com/APxe7tsb2b

Berry Accius, of Sacramento’s Voice of the Youth, told KXTV he arrived to the ‘chaotic’ scene around 2.30am.

‘A lot of victims with blood, just watching some of the families that didn’t know if their loved one was alive, running, trying to figure out what was happening, people distraught, people discombobulated,’ Accius said. ‘It was just horrific.’

‘I saw a young girl with a whole bunch of blood in her body, a girl taking off glass from her, a young girl screaming saying, ‘They killed my sister.” 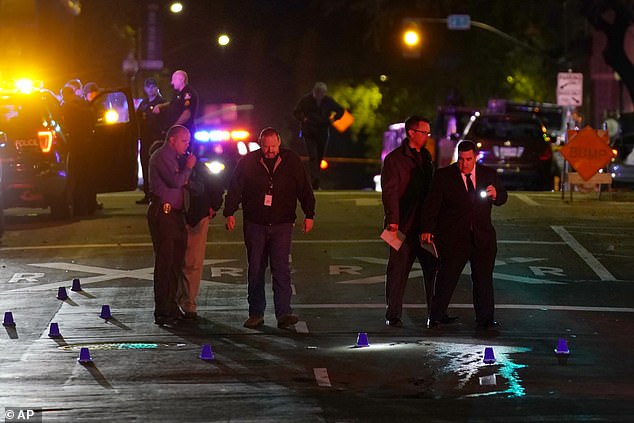 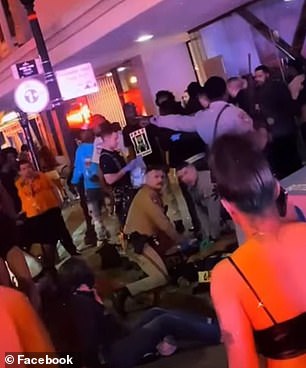 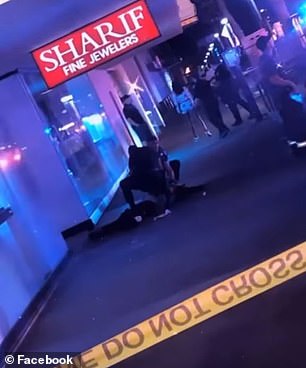 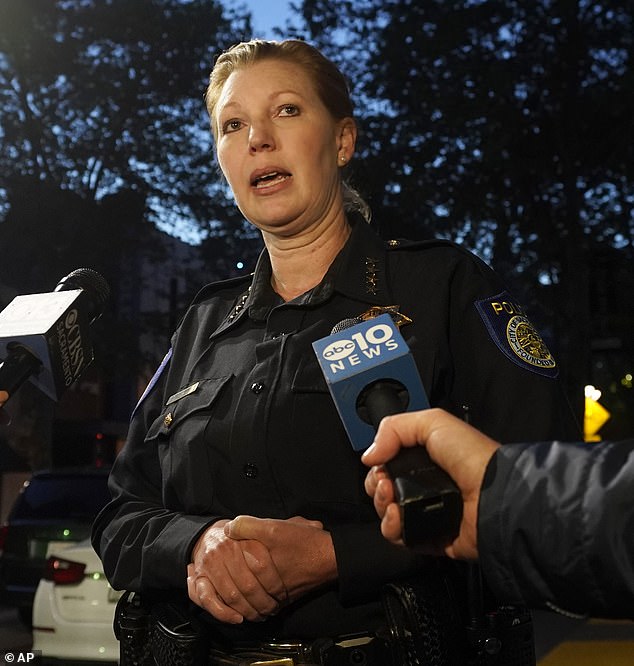 The community activist also recalled a mother running up to the scene, asking: ‘Where’s my son, has my son been shot?’

Accius said the area, which is known for its nightlife, should’ve been a safe space.

‘I’m just shocked that somebody would come here to a place where it should be safe and do something as heinous as this with multiple victims, not only just shot but dead in our city,’ he added. ‘Right here in downtown, in a safe space.’

Kay Harris, a Sacramento resident, said she was asleep when one of her family members called to say they thought her brother had been killed. He had reportedly gone out to London, a nightclub located on 10th Street.

‘Very much so a senseless violent act,’ she told the Associated Press.

Harris, 32, said she has been to the club a few times and described it as a place for ‘the younger crowd.’ 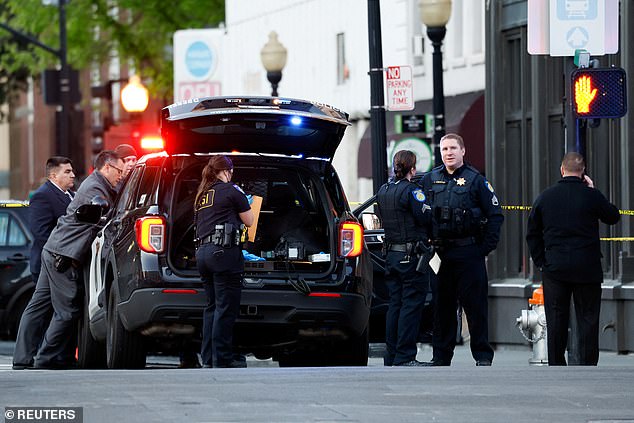 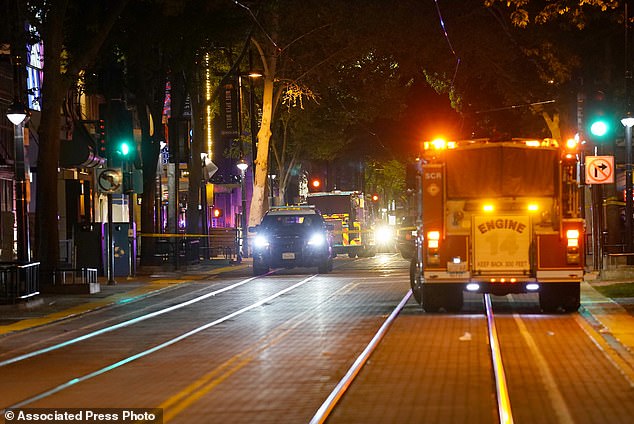 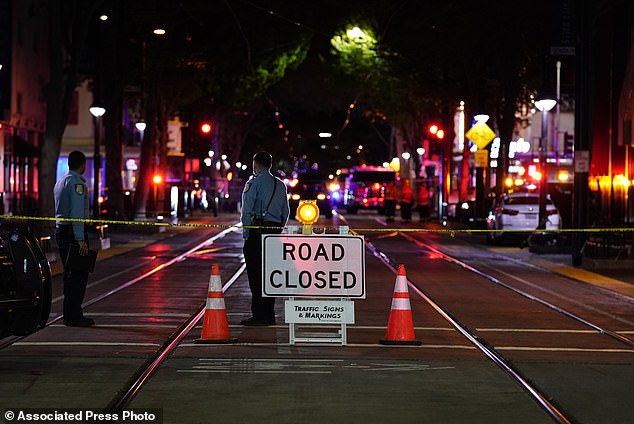 Sacramento City Council member Katie Valenzuela took to Twitter early Sunday morning to issue her support for the community amid the tragedy.

‘Around 2.30am, I got the call no elected official wants to get. Another shooting. More lives lost,’ she wrote.

‘The national gun violence epidemic has hit our community – again. I won’t release any specifics until @SacPolicedoes. Until then, please take care of each other.’

Authorities did not immediately respond to DailyMail.com’s request for comment. 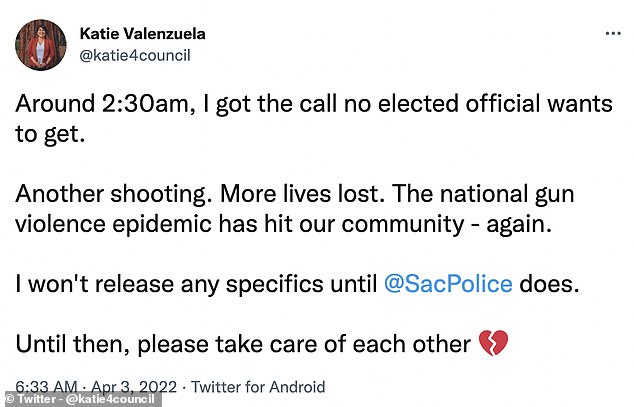 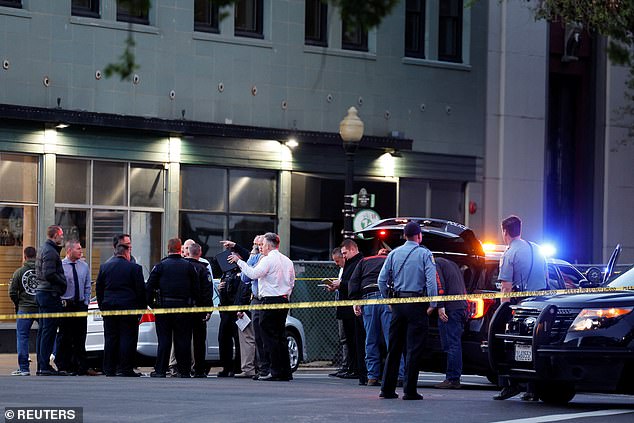 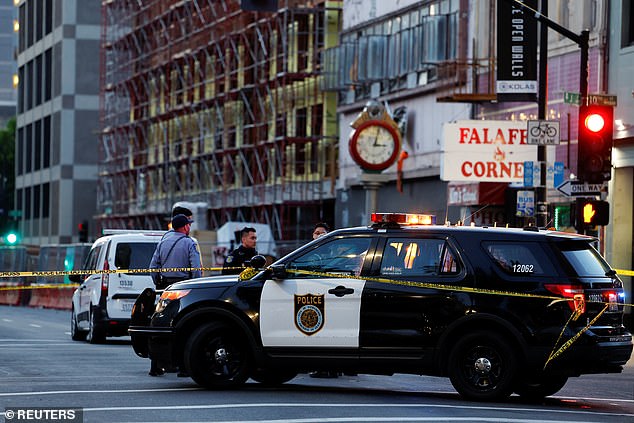 Hawks-Nets: The Nets aren’t worth the best night of Durant’s career: 55 points