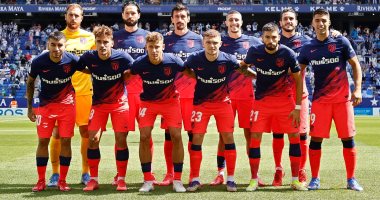 The Spanish team Atletico Madrid will meet its guest Athletic Bilbao, in the confrontation scheduled to take place at 4:15 in the afternoon, Saturday, at the “Wanda Metropolitano” stadium, as part of the fifth round of the Spanish League competition for the current season 2021-2022.

Atletico Madrid, led by coach Diego Simeone, is facing a strong night, and he shares the top spot in the Spanish league standings with 10 points, equal with Real Madrid and Valencia, who outperform him only by goal difference, while Athletic Bilbao is fifth with 8 points.

Al-Rukhi Blancos is seeking to win in order to continue the competition for the top spot in La Liga, and to achieve its second consecutive victory in the competition, after achieving a fatal victory over its host Espanyol, 2-1, in the match that brought them together in the fourth round of matches at the “Power 8” stadium.

Atlético Madrid had recently fallen into the trap of a goalless draw against its Portuguese guest, Porto, in the match that brought the two teams together, last Wednesday evening, at the “Wanda Metropolitano” stadium, in the first round of the second group stage of the Champions League group stage.

On the other hand, the “Transfer Market” website, which specializes in statistics, revealed the most expensive formation of the Spanish League, “La Liga”, with a market value of about 755 million euros. Its price is about 90 million euros.

The most expensive squad included 5 players from Atletico Madrid (the title holder), in addition to two players from Barcelona and the same from Real Madrid.