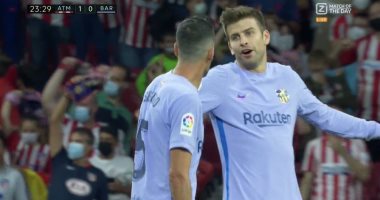 An argument erupted between Barcelona’s Spanish duo, Gerard Pique and Sergio Busquets, after the first goal in favor of Atletico Madrid, in the confrontation being held between them at the “Wanda Metropolitano” stadium, the stronghold of Roji Blancos, in the eighth round of the Spanish League competition 2021-2022.

Busquets blamed Pique after Thomas Lemar scored the first goal for Atletico Madrid, causing the two to enter into a verbal altercation, while Barcelona coach Ronald Koeman expressed his dissatisfaction with the result while in the stands in implementation of a two-game suspension.

Pique and Busquets got into it after they conceded 😳 pic.twitter.com/bQA90DfKKF

Barcelona is sixth in the Spanish league standings with 12 points, collected from three victories and the same from draws, and the Catalan club has a postponed match.

As for Atlético Madrid, it is fourth in the La Liga standings with 14 points, which it has won in four games, a draw on two occasions and one loss.

Atlético Madrid is looking to avoid making mistakes again by preparing for the meeting, to try to stop the bleeding of points and continue to compete for the title and defend it for the second season in a row.

While the Catalan team is preparing for this meeting with full force, coach Ronald Koeman knows that his balance has run out and any loss that may topple him outside the walls of the Catalan club, and realizes the difficulty and strength of the opponent.

The two teams have faced each other in 168 matches. Barcelona managed to win 75 matches, while Atlético Madrid won 51 matches, and 42 matches were tied.

Arteta: Arsenal don't deserve more than a draw against Brighton and I'm not happy with the performance