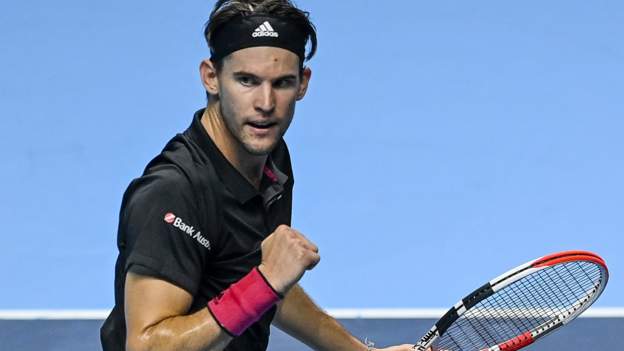 The Serb led 4-0 in the deciding tie-break but Thiem, trusting in his big hitting, was able to outmuscle Djokovic and claim a fine win at the O2 Arena.

Thiem will play Rafael Nadal or Daniil Medvedev in the final.

Spanish world number two Nadal, who has never won the season-ending showpiece, plays the Russian at 20:00 GMT on Saturday.

Thiem’s increased confidence, built in a year when he won his first Grand Slam title at the US Open, was enough to enable him to edge past Djokovic in a tight third set.

He covered his face in delight after putting away a forehand winner that secured victory after two hours 57 minutes.

In truth, Thiem played the better tennis on the key points, his belief in his shot-making and ability to play the big shot at the right moment proving decisive.

He double faulted on the opening point of the deciding tie-break and Djokovic raced into the lead before Thiem sliced his way back into contention.

A fifth match point was cancelled out by a Djokovic ace but Thiem’s relentless backhand that hugged the baseline was key to his victory.

Djokovic has not been at his best in London and he cut a frustrated figure throughout the decider, letting out a furious yell when he sent an easy return of serve long at 30-30 on the Thiem serve in the third.

His groundstrokes were simply not as consistently composed as usual and his repeated moves to the net did not work.

Usually, a 4-0 lead in a tie-break for Djokovic would mean game over. Instead, he was out-hit and out-thought by his opponent.

The opening set was a tight affair. Thiem struggled to locate his forehand, while Djokovic – rather like against Medvedev in a group-stage defeat – was faced with someone as capable as him of chasing down every ball and extending the rallies.

Both players’ serves got them out of trouble after they fell to 0-30 in their respective service games, but despite his obvious unhappiness with his forehand, it was Thiem who created the sole break opportunity of the first set.

The Austrian set up the chance with a thumping cross-court forehand winner and was rewarded as Djokovic came forward and volleyed a simple forehand into the net, ultimately allowing him to serve out the set.

A tie-break felt inevitable as both players saved break points in the second set, but neither was at their best, with a nervy Thiem double faulting on his second match point.

Neither man seemed comfortable, making uncharacteristic errors as they aimed for the lines of the court, but Thiem created his own downfall with some wild shots.

Thiem’s heavy hitting seemed to outmuscle Djokovic on the baseline but the Serb’s characteristic resilience drew the errors out of Thiem, and the top seed eventually forced a decider.

Despite the loss, Djokovic finishes the year as world number one, having lost just five matches in 2020, and will now prepare to defend his Australian Open title in January.