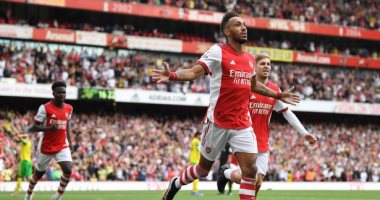 Arsenal captain Pierre-Emerick Aubameyang stressed the importance of the victory that his team managed to achieve on Saturday evening, at the expense of Norwich City in the English Premier League, after the Gabonese team led the Gunners to victory over Norwich City, where the international scored the only goal of his team’s victory in the meeting.

Aubameyang said in comments published by the English newspaper “Mirror”: “I am happy to achieve the first three points of the season, it was a difficult weeks, so we had to make sure that we won this match in front of our fans, the most important thing today was to play with pride and this is what we did.”

Aubameyang added in his speech: “It was really difficult, when you lose matches as players, we are the first to be affected inside, we had 10 days to prepare ourselves and change things and that is what we did, today we made sure we won this match and got three points.”

On winning the first three points, Al Gabouni commented: “In general we played well, we had a lot of chances, we have to be a little more effective in front of goal, but everyone gave everything on the pitch.”

With this result, Arsenal achieves its first 3 points in the English Premier League, to occupy the sixteenth place in the table, while Norwich City is in the twentieth and last place without a balance of points.