‘We’ve been very fortunate’: Novak Djokovic speaks out about the Australian Open quarantine debate in his first interview of the year – after VERY creative efforts to lure him and Serena Williams onto their balconies

By Richard Evans In Adelaide

Three days after the world’s best male tennis player was panned for his demands for more freedom for all athletes quarantining in Australia, a tiny Adelaide radio station has scooped the first interview with Novak Djokovic this year – by enlisting two artists to paint a giant portrait of the Serb outside the South Australia hotel where he is in lockdown.

A 1.5 by 1.2 metre portrait of Djokovic was painted in just four hours from 4am on Thursday by local artists Mark Lobert and Candice Thomas in full view of Djokovic’s balcony to lure him in.

And at about midday, the eight time Australian Open champion came out and called over to Mix 102.3 breakfast show host Mark Soderstrom who was attempting to ‘reunite’ with Djokovic, whom he met briefly 14 years ago when the teenager won the Adelaide International. 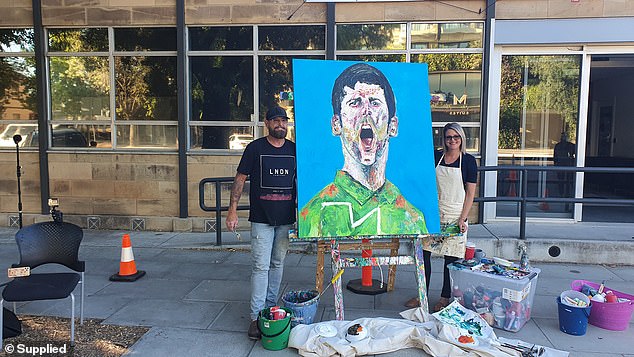 A 1.5 by 1.2metre portrait of the Serb champion was painted in just four hours on Thursday by local artists Mark Lobert and Candice Thomas in full view of the players’ rooms

‘Us getting that special permission to be here and quarantine and to be able to participate in the Australian summer of tennis is obviously a privilege and we have been fortunate,’ Djokovic said. 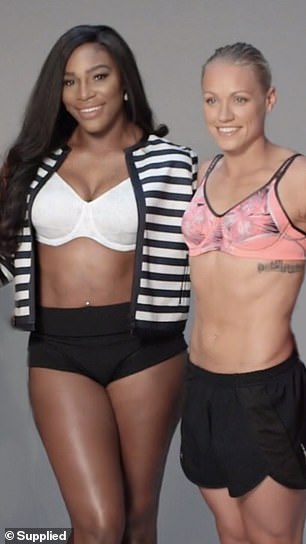 ‘So my heart goes out to all the people suffering and we just hope this all will pass very soon and we will be able to live freely and normally as we had before this started.’

He revealed his great love of Adelaide and said it was the place where he first drove a car.

Meanwhile, North Adelaide residents should keep a lookout for the local parks next Friday morning when Djokovic’s 14 day quarantine spell is up and where he plans to run to celebrate his new found freedom.

The eye-catching portrait will be auctioned off for charity at an exhibition match in Adelaide next Friday featuring Djokovic, Williams and fellow superstars Rafael Nadal, Simon Halep, Naomi Oaska and Dominic Thiem later the same day.

The rendezvous came about after Soderstrom and breakfast show co-host Erin Philips decided to see who could first speak to Djokovic or Serena Williams who is also staying at the same Majestic M Suites hotel along with Nadal and other top names.

Phillips appeared to have the edge earlier this week when she let it slip that she has a history of ‘being semi-naked with Serena’.

‘In the lead up to Rio Olympics there was a Berlei bras photoshoot and I got asked to participate,’ she said of the Melbourne gig headlined by Williams. 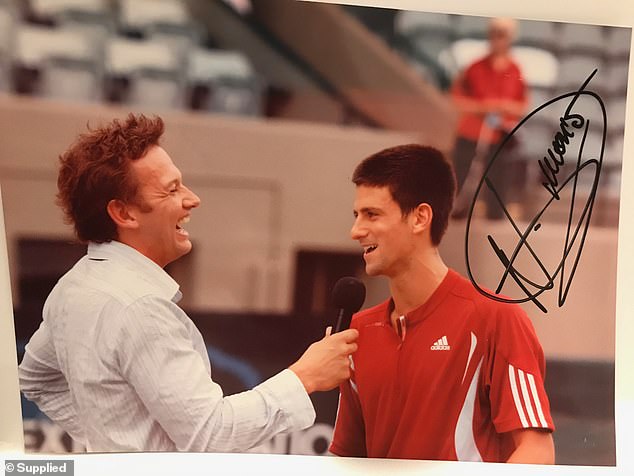 The link to Djokovic is tenuous Soderstrom admits, they met just once when he was an on-court announcer at the 2007 Adelaide tournament

‘I didn’t care what I was wearing, I just wanted to meet one of the greatest athletes ever. It was one of those crazy moments.

‘Serena came in and was wonderful. You felt you were in the presence of greatness, I was just in awe of her.’

The link to Djokovic is tenuous Soderstrom admits, they met just once when he was an on-court announcer at the 2007 Adelaide tournament.

‘Everyone knew he was going to be a star. It was raining and Novak said we had to do something to entertain the fans,’ Soderstrom said. ‘So we despatched ball boys to borrow some clubs and then chipped the balls into plant pots on court.’

A Tuesday attempt to flush out Williams flopped, despite a personalised rendition of ‘Say my name’ by Destiney’s Child, purportedly one of her favourite tracks, sung from the radio rooftop.

But Djokovic, who was fascinated by how Phillips could excel at two different sports, says he will ask Williams to get in touch with one of Adelaide’s favourite sporting stars. 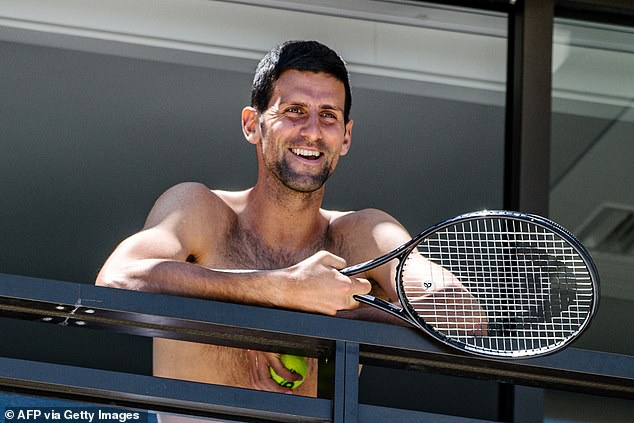