World No.1 Ash Barty has celebrated her birthday weekend by winning two titles – and a brand new sports car – at the Porsche Tennis Grand Prix in Stuttgart after a third consecutive comeback triumph in the singles final against Aryna Sabalenka.

To complete another landmark week, the Australian, who turned 25 on Saturday, then won the doubles title on a busy, fun – and lucrative – Sunday with her American partner Jennifer Brady.

After her singles win, Barty was presented with her $107,074 winner’s cheque and a brand new Porsche, which seemed perfectly appropriate for someone who had accelerated away majestically after an early test from Sabalenka. 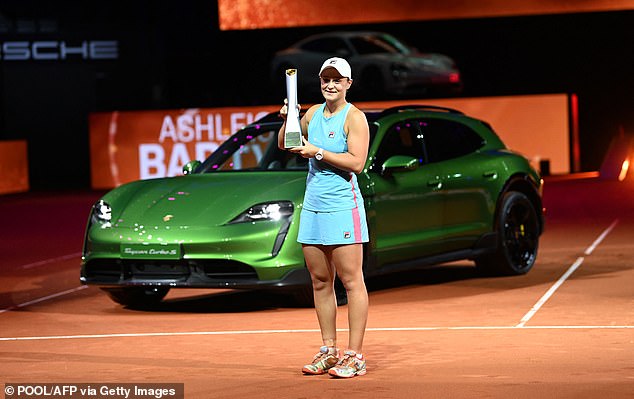 It was another performance full of skill and resilience to dismantle the Belarusian’s power game and win 3-6 6-0 6-3 for her third singles title of the year.

And it left Barty feeling that she’s taking her tennis to a new level – ominous news for her rivals.

For the third day running after come-from-behind wins over Karolina Pliskova and Elina Svitolina, the Queenslander dug deep on the indoor clay after dropping the first set.

Sabalenka, who needed a medical timeout at the end of a second set drubbing, was in tears at one of the changeovers in the deciding final set, struggling not just with a heavily-strapped right thigh but also with Barty’s supreme, bamboozling all-court game. 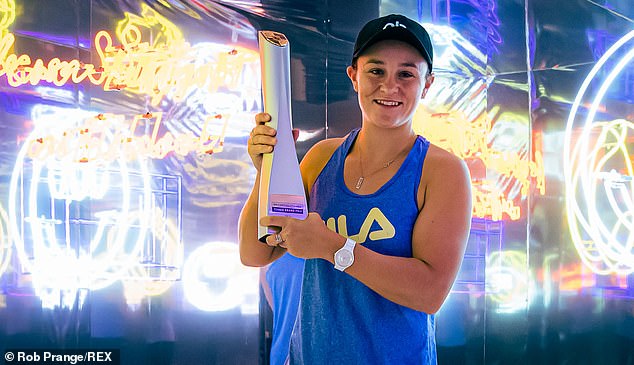 The Australian, who turned 25 on Saturday, then won the doubles title on Sunday with her American partner Jennifer Brady

Sabalenka said she had been suffering a lot of pain from an adductor muscle issue that had flared up in the first set.

The triumph, Barty’s 10th successive over a fellow top-10 player, saw her shoot to the top of the WTA’s ‘Race to Shenzhen’, the order of merit system that identifies the year’s top woman player.

It was her first European tournament on clay since triumphing in the 2019 French Open and she looked in the sort of form to regain the trophy that she decided not to defend last year.

‘There is a first for everything, isn’t there?’ laughed Barty after being asked if it was the first time she’d won a bright green Porsche and two titles at the same tournament. 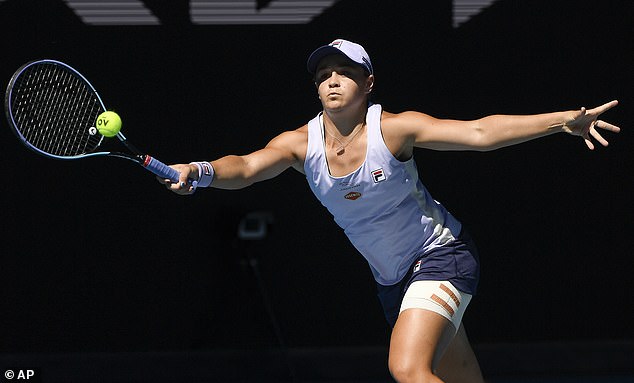 The triumph, Barty’s 10th successive over a fellow top-10 player, saw her shoot to the top of the WTA’s ‘Race to Shenzhen’

‘This week’s been phenomenal for me. I’ve certainly felt like I’m taking my tennis to a kind of a new level in a sense of being able to be calm and play with freedom and play without consequence in a way.’

Barty had just over an hour’s rest before joining forces with her friend, Australia Open finalist Brady, to beat the top-seeded US pairing Bethanie Mattek-Sands and Desirae Krawczyk 6-4 5-7 [10-5].

Still fresh after three-and-a-half hours on court all told, Barty celebrated becoming the first reigning world No.1 since Justine Henin in 2007 to win in Stuttgart and the first since American Lindsay Davenport 20 years earlier to win both finals at the same tournament there. 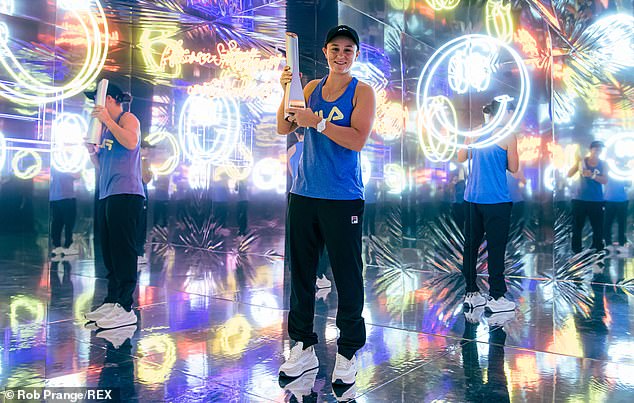 Barty celebrated becoming the first reigning world No.1 since Justine Henin in 2007 to win in Stuttgart

‘It’s extremely humbling to be even mentioned in the same sentence as both Justine and Lindsay, they’re both legends of the game,’ she said.

Her singles victory had been beautifully constructed after Sabalenka’s destructive hitting helped her earn her the one crucial break for 5-3 in the opener but Barty’s response was remarkable, as she reeled off nine straight games.

Soaking up the pressure and mixing up her responses with immaculate angles and depth to her shot-making, Barty was at her brilliant best on a lively indoor clay-on-boards surface she’d never experienced before.

And although Sabalenka fought on, Barty, who hammered 26 winners and broke the Belarusian’s delivery five times, held off her attempt at one last show of defiance to prevail in one hour 47 minutes.

‘She’s number one, she’s on top – and she’s a great player,’ was Sabalenka’s verdict, one that is being shared throughout the game. 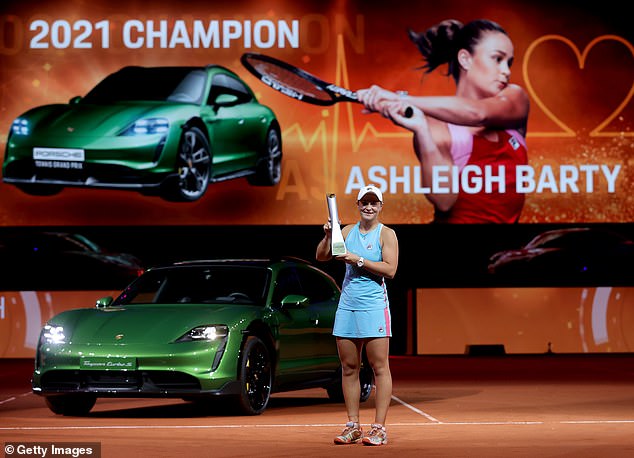 The triumph, Barty’s 10th successive over a fellow top-10 player, saw her shoot to the top of the WTA’s ‘Race to Shenzhen’, the order of merit system that identifies the year’s top woman player (pictured, with her new car on Sunday)