The International Monetary Fund’s upgrade of the Australian economic outlook confirms the nation has outperformed all major advanced economies over the past year, Treasurer Josh Frydenberg says.

In January, the Washington-based institution expected the economy to grow by 3.5 per cent in 2021.

‘What this report confirms is that we’ve outperformed all major advanced economies over the last year,’ Mr Frydenberg said on Wednesday. 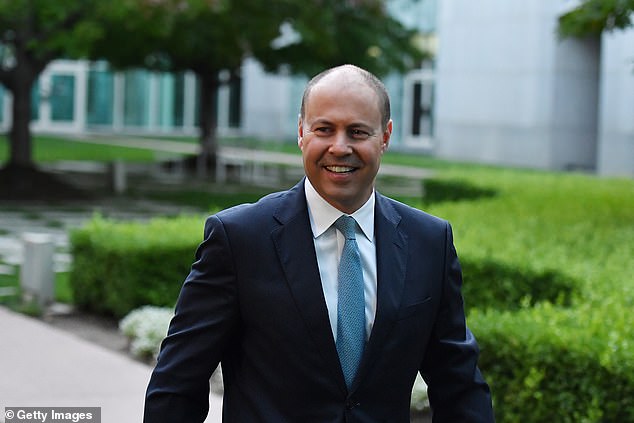 The International Monetary Fund’s upgrade of the Australian economic outlook confirms the nation has outperformed all major advanced economies over the past year, Treasurer Josh Frydenberg says

‘They’re still a long way to go, but Australians can see the light at the end of the tunnel.’

In it latest World Economic Outlook, the IMF is also projecting a stronger recovery for the global economy in 2021 and 2022 compared to its previous predictions made in January.

But the fund warns a high degree of uncertainty surrounds these projections, with many possible downside and upside risks.

‘Much still depends on the race between the virus and vaccines,’ it says.

‘Greater progress with vaccinations can uplift the forecast, while new virus variants that evade vaccines can lead to a sharp downgrade.’

Despite the Reserve Bank’s efforts to fuel the economy through record low interest rates, the IMF expects Australian inflation to be still below the central bank’s two to three per cent target band at the end of next year.

The IMF also does not expect Australia’s unemployment rate to be comfortably below six per cent until next year, forecasting a rate of 5.5 per cent in 2022.

The jobless rate did unexpectedly dip to 5.8 per cent in February, but there is now uncertainty about the employment outlook after the government’s JobKeeper wage subsidy program came to an end last month.

How one woman discovered her true cultural heritage

How one woman discovered her true cultural heritage