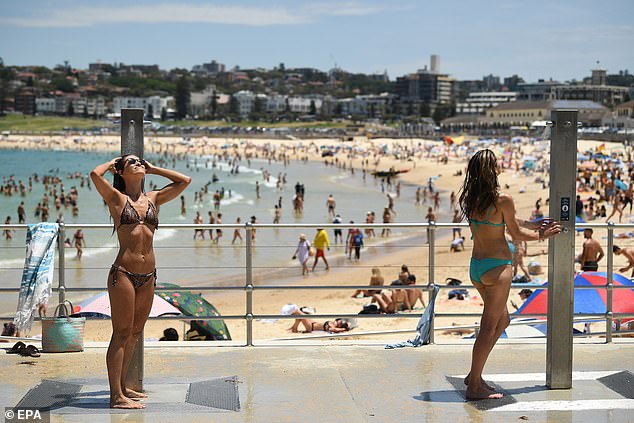 Australia’s east coast will face temperatures as high as 47C and storms over the weekend, as Fraser Island continues to battle ongoing bushfires.

The Fraser Island fire in Queensland has burnt through 82,000 hectares of World Heritage Listed bushland since it began in mid-October.

Visitors have been barred from the island since November 27 with conservation experts saying the scale of fire damage is a ‘catastrophe’ for the area.

BoM meteorologist Jenny Sturrock said ‘heatwave conditions have not completely eroded’ in Queensland and New South Wales and will persist over the coming weekend.

Both Queensland and northern NSW will experience a ‘severe heatwave’ over the weekend with temperatures as high as 47C inland, according to BoM.

Beachgoers use the shower after a swim during heatwave conditions at Bondi in Sydney last Saturday. BoM meteorologist Jenny Sturrock said ‘heatwave conditions have not completely eroded’ in Queensland and New South Wales and will persist over the coming weekend

Birdsville in central west Queensland is expected to be 47C on Saturday, making it the hottest place in the country.

Brisbane will face a maximum of 32C on Friday with possible showers and storms in the late afternoon and evening.

Sunny skies will return as the maximum increases to 32C on Saturday, before jumping to 33C on Sunday and 34C on Monday.

Showers and storms are also expected to return on Monday before being replaced by cloudy skies and a consistent 34C high on Tuesday.

The BoM has warned Queenslanders could be at risk of smoke inhalation as winds carry smoke from the Fraser Island bushfires.

‘Northeasterlies are currently fanning flames with northerlies likely to return Friday. It could bring smoke into the southeast coast area over coming days,’ the warning read. 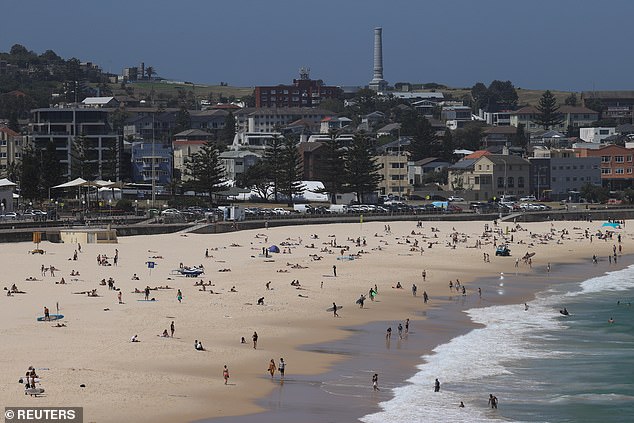 Beachgoers soak up the sun on the first day of summer at Bondi Beach on Tuesday. Sydney will reach a maximum of 28C on Friday, which will increase to 32C on Sunday

Sydney will reach a maximum of 28C on Friday, which will remain consistent on Saturday, although sunny skies will be replaced by showers and a possible storm.

The rain will dissipate on Sunday and the temperature will rise to 32C before dropping to 31C on Monday and further cooling down on Tuesday.

As usual, Sydney’s west will face hotter temperatures than the city and east with temperatures as high as 35C in Penrith and 33C in Liverpool on Friday and Saturday.

Explaining the ongoing heatwave, Ms Sturrock said the warm weather has been given a second wind from moving inland to heat up again.

‘Rather, this hot air mass is shifting back over inland Queensland where it will re-intensify before moving over southeast Queensland and northern NSW this weekend.

‘Its return will cause maximum temperatures to soar back up into the high 30s and low 40s.

‘While at this stage, widespread temperature records are not expected to be broken, this heat will make people feel uncomfortable.

‘Please follow all advice from emergency services and stay cool.’ 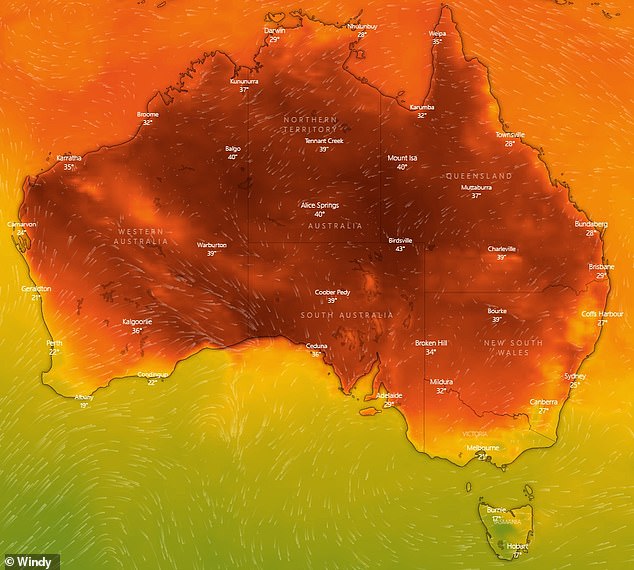 A heat map of Australia for forecast temperatures at 4pm on Friday. The north and east coast will face hot temperatures but moving south to Melbourne and Hobart it is much cooler 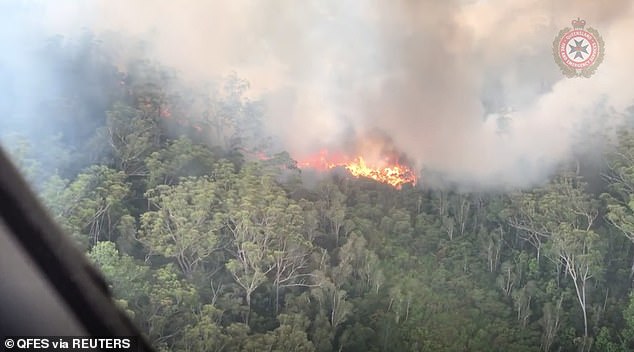 An aerial view of the Fraser Island bushfire on Wednesday, which is still burning as of Friday morning. It has burnt through 82,000 hectares of World Heritage Listed bushland since it began in mid-October

While Queensland and NSW swelter through hot temperatures, Melbourne is comparatively cool.

The Victorian capital will face showers and a maximum of 26C on Friday, which will drop to 20C on Sunday, 19C on Monday and just 18C on Tuesday.

There will be possible showers from Saturday all the way through to Tuesday.

Moving further south, there is a similar trend in Hobart with a maximum of 22C and increasing rain on Saturday.

The temperature will drop to 19C on Sunday, 17C on Monday and 18C on Tuesday, with showers steadily dissipating over this time.

It comes after residents of Mount Wellington in Hobart woke up to summer snow on Wednesday morning from Tuesday night’s blustery cold front.

Similarly, Canberra will have a maximum of 30C on Saturday before dramatically cooling down to 21C on Sunday and just 19C on Monday.

Canberrans will also face some chilly starts in the morning with a minimum temperature of 11C on Saturday, which will drop to just 6C by Tuesday. 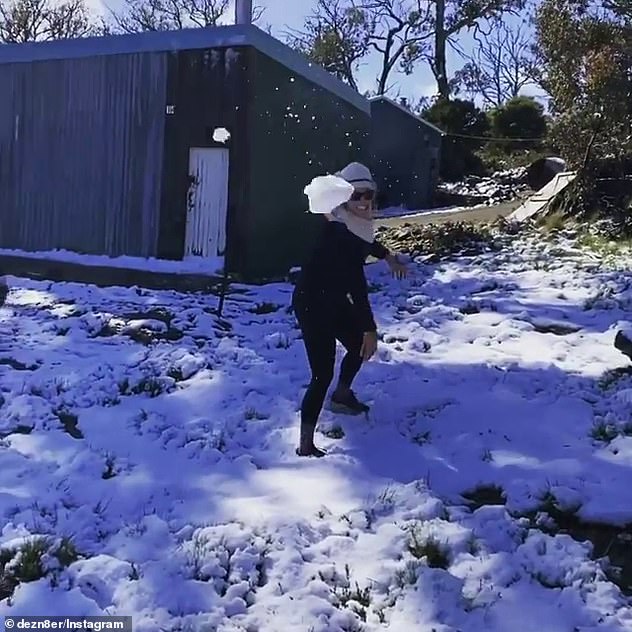 Residents in Tasmania woke up to snow (pictured) on Wednesday while the rest of the country sweltered through a heatwave. Hobart will face continuous cool temperatures and rain over the weekend 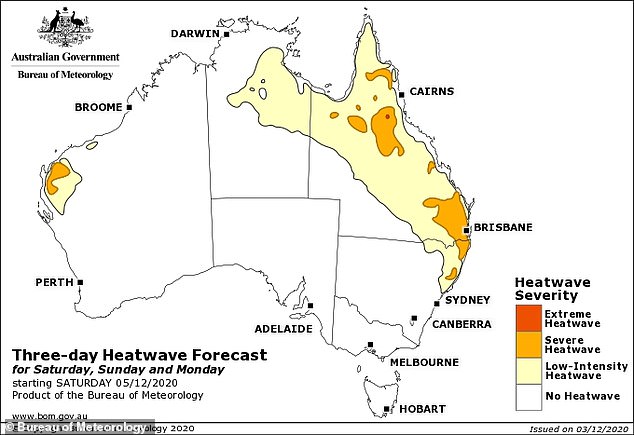 Eastern and north Queensland as well as northern NSW will experience a ‘severe heatwave’ over the weekend. There will also be similar conditions on the mid west coast

Meanwhile on the west Coast, Perth is comparatively mild but will heat up to almost 40C by mid next week.

The WA capital will have a maximum of 24C on Saturday with cloud clearing, which will see the temperature rise to 27C on Sunday.

By Monday, the mercury will hit 32C before peaking at 38C with clear and sunny skies on Tuesday and remaining consistent at 37C on Wednesday.

Adelaide will reach a maximum of 28C on Saturday, which will drop to 20C on Sunday and Monday, with showers forecast over this period.

Rain is expected to dissipate on Monday as the temperature increases to 22C.

While the rest of the country kicks off Summer, Darwin in the tropical north is starting its wet season.

The maximum temperature will be 32C on Saturday, which will increase to 33C on Sunday and remain consistent until Wednesday, when it increases to 34C.

Showers and possible storms are forecast from Saturday to Wednesday.

‘They caught JAWS!’: Massive 394kg shark caught off the coast of Sydney

What the Warner Bros., HBO Max deal means for moviegoing in 2021 and beyond

Morocco records 446 cases and 15 new deaths from the Coronavirus