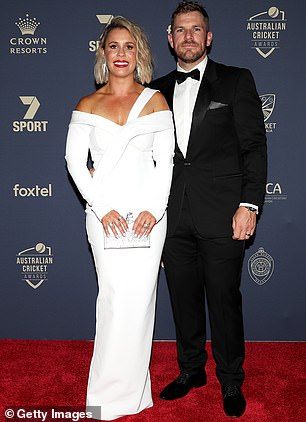 Aaron Finch and wife Amy arrive ahead of the 2020 Cricket Australia Awards at Crown Palladium on February 10, 2020

The wife of Australian cricketer Aaron Finch has called out trolls threatening her with sexual assault and violence amid her husband’s form slump.

Amy Finch shared a disgusting comment left underneath one of her posts this week taken aim at her and the One Day International Australian captain.

‘Tell your husband to step up his captaincy bloody loser f**king a**hole b*tch because of him I lost all my money,’ the comment read.

Ms Finch fired back with a lengthy post and said this ‘c*** happens far too often’.

‘Part of me doesn’t want to give this individual the satisfaction of a response,’ Ms Finch wrote.

‘I don’t appreciate it, neither does my husband who is battling and doing everything he possibly can to get back into the runs.

‘Honestly, these keyboard warriors need to go get a bloody life. This isn’t even one of the worst that has come my way but I’ve had enough!’ 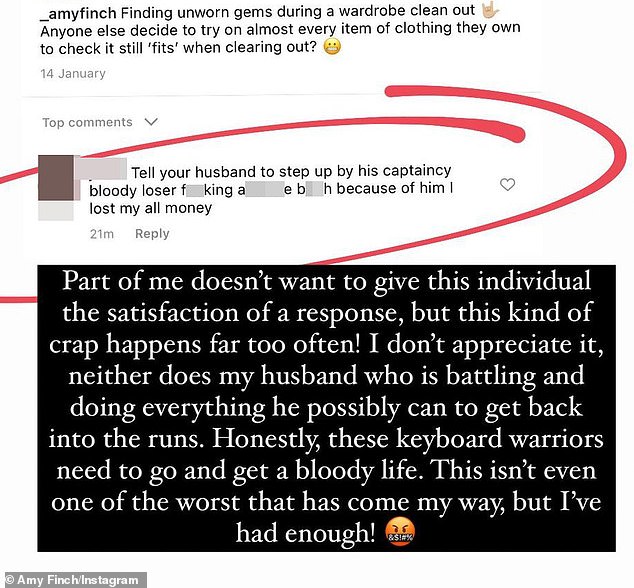 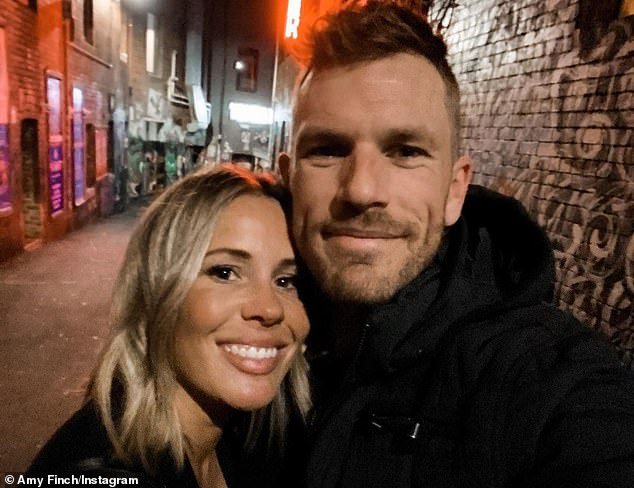 Ms Finch said trolls have been attacking her, her husband and other family members for years but had to say something after the threats turned violent.

‘I have a pretty thick skin and can generally ignore them but recently there have been direct threats of violence and sexual assault,’ she wrote.

‘You name it, I’ve heard it. It’s gotten to a point where it needs to be called out because ignoring it doesn’t stop these people.

‘NOBODY deserves that sort of language to be directed at them!

‘If you happen to be a fan, how about lending some words of encouragement and support.

‘Otherwise, don’t call yourself a fan and please, do me a favour and press the unfollow button! A touch of kindness can go a long way!’ 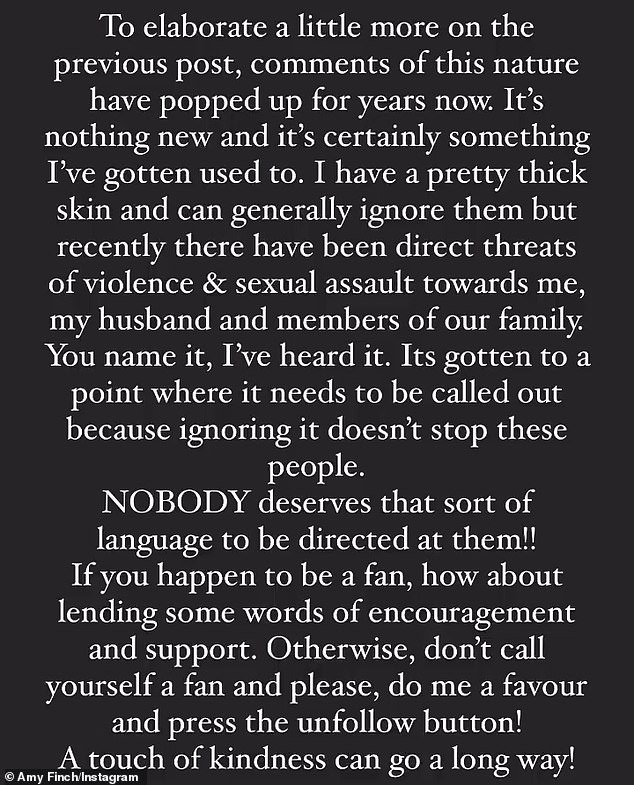 Ms Finch said trolls have been attacking her, her husband and other family members for years but had to say something after the threats turned violent

Finch never got moving during his stay at the crease in Australia’s tight four-run loss in Dunedin.

Playing and missing his first stroke, Finch finished with 12 off 14 after pulling an effort to midwicket in an attempt to up his run rate.

The 34-year-old is a T20 legend but endured a poor Big Bash League, averaging just 14 and captaining the Melbourne Renegades to the wooden spoon.

Stoinis said Finch’s critics should think back to his one-day series against India in November – when he averaged 83 and scored a superb century in Sydney – for proof he still had what it takes.

‘There’s just full confidence that he’s going to perform for us,’ he said.

‘I just see it as a long-term picture because come the World Cup we need him firing.

‘He’s arguably the best 20-20 batter in the world over a long period of time. His record so good. He’s our captain. In our heads we just trust him.

‘The same thing happened when he came back from IPL (in 2020), he didn’t have the IPL he wanted but he made hundred after hundred in the one dayers.

‘You got to ride out these sort of things…we’ve got his back.’ 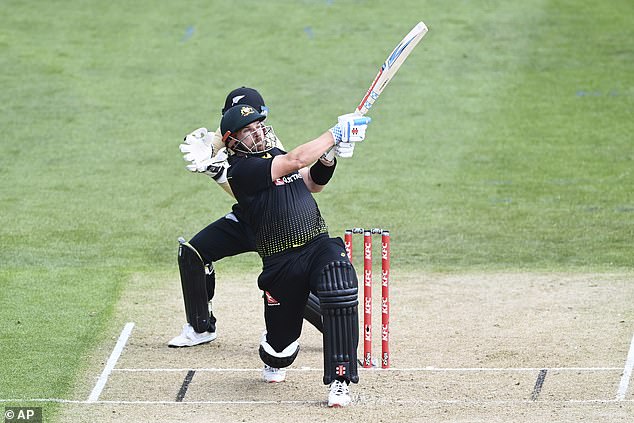 The coach of the US gymnastics team commits suicide in the 2012 Olympics, after being accused of mistreatment of players

Returnal Is a PS5 Exclusive Roguelike with Plenty of Promise

Returnal Is a PS5 Exclusive Roguelike with Plenty of Promise