Australian cricket legend Dean Jones has been farewelled on the hallowed turf of his beloved Melbourne Cricket Ground in a private ceremony.

Jones, 59, died of a heart attack at the Trident Hotel in Mumbai last month, leaving the cricket world in shock and mourning the loss of one of the game’s icons.

Jones did a final lap of the MCG with the music of his friends Elton John and INXS playing out in the empty stadium. 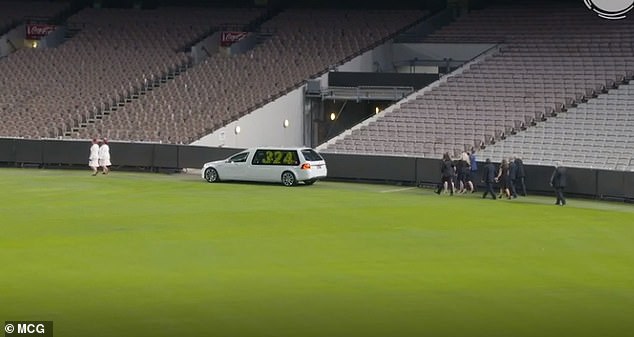 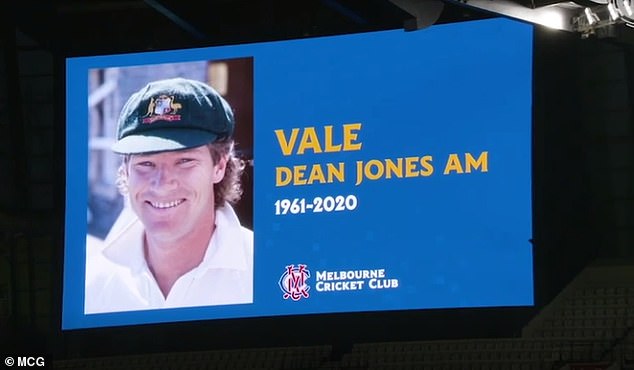 His old teammate Brett Lee had tried desperately to help him after he collapsed, performing CPR twice and briefly bringing him back to life before his eventual death.

The ceremony was held for Jones last weekend, with only a handful of people allowed to send-off the champion due to COVID-19 restrictions.

Jones was taken for one final lap of the MCG in a hearse carrying his handmade Indian coffin, which was adorned with the Australian flag and a floral 324 arrangement showcasing the batting star’s Test cap number.

The private memorial was attended by 10 family members, including wife Jane and daughters Phoebe and Augusta, who followed the hearse on its final journey.

It is understood a larger public memorial will be staged for Jones in the coming months once restrictions ease in Melbourne, which remains under Stage Four lockdown.

Mrs Jones thanked the community for their support following her husband’s sudden death.

‘We have been deeply moved by the outpouring of love for Dean over the last week and can’t thank everyone enough for their support and for sharing their memories with us,’ she said.

‘What better way to honour him than with the music of his friends Elton John and INXS echoing throughout the empty stadium.’ 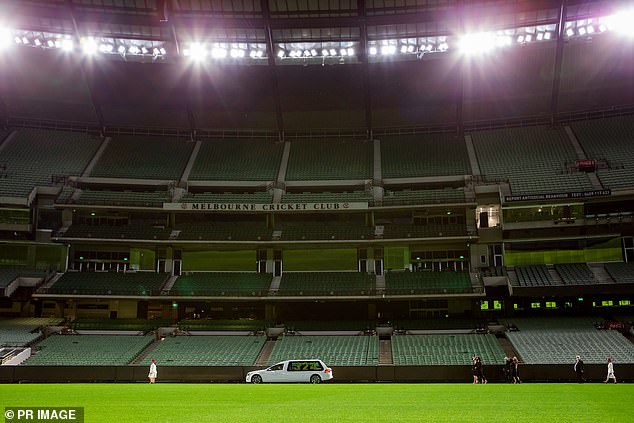 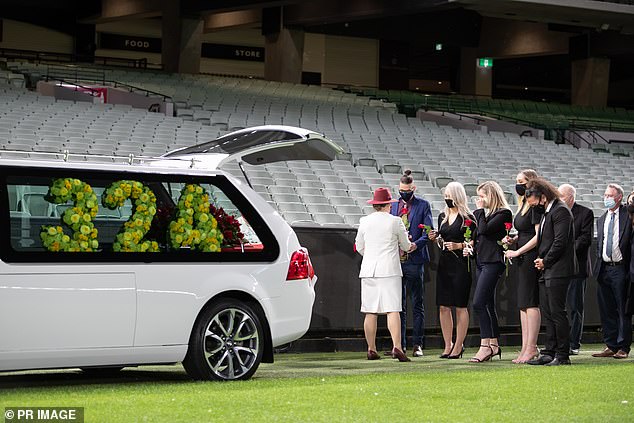 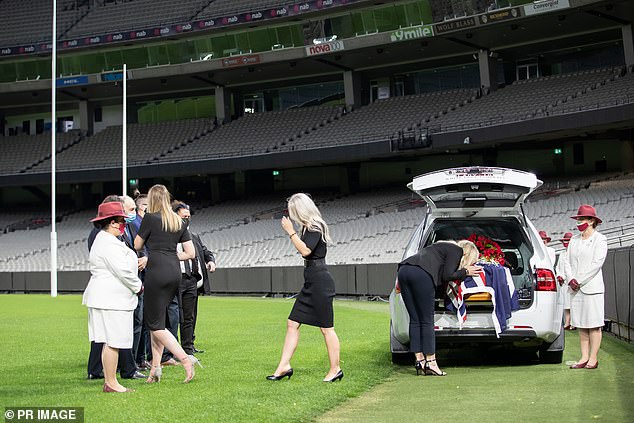 The ceremony was held for Jones last weekend, with only a handful of people allowed to send-off the champion due to COVID-19 restrictions 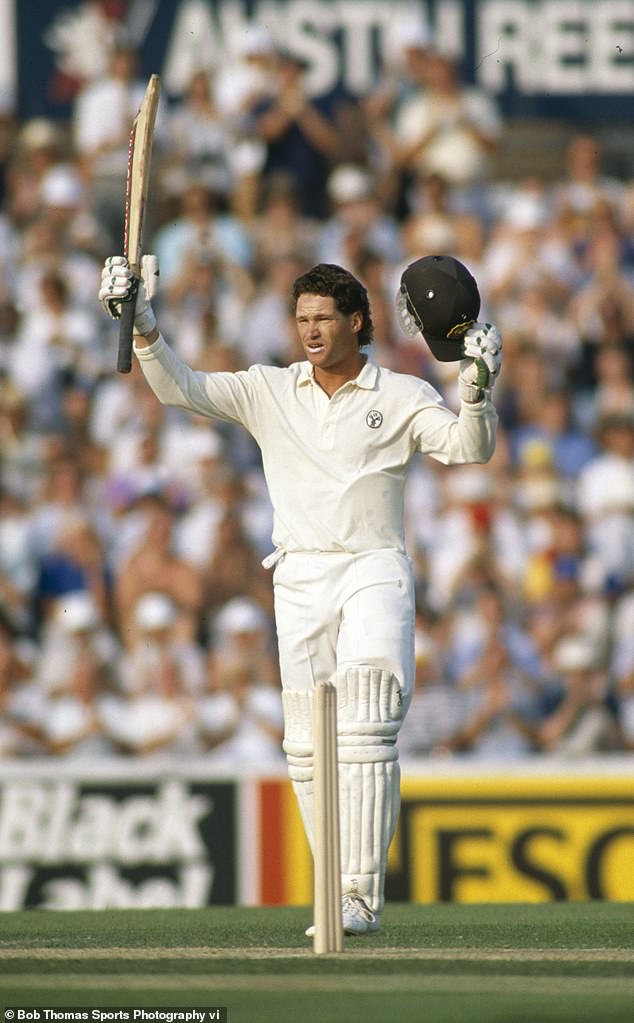 Jones (pictured in 1989) died in Mumbai, India, on Thursday – leaving the cricket world in shock and mourning 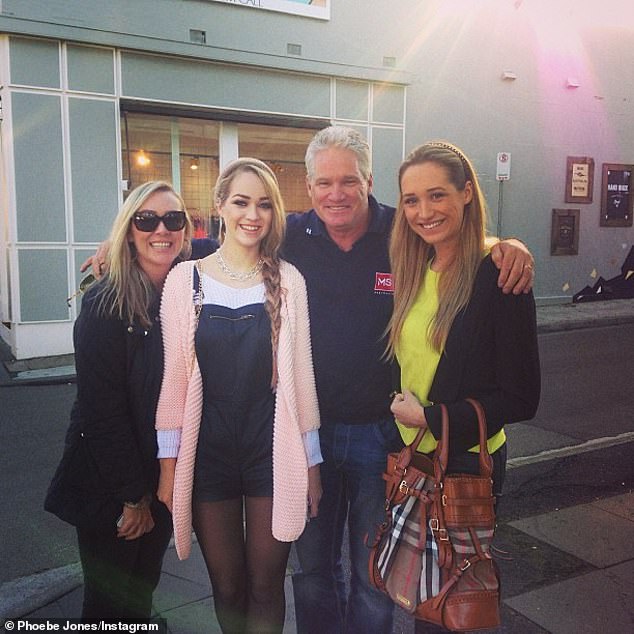 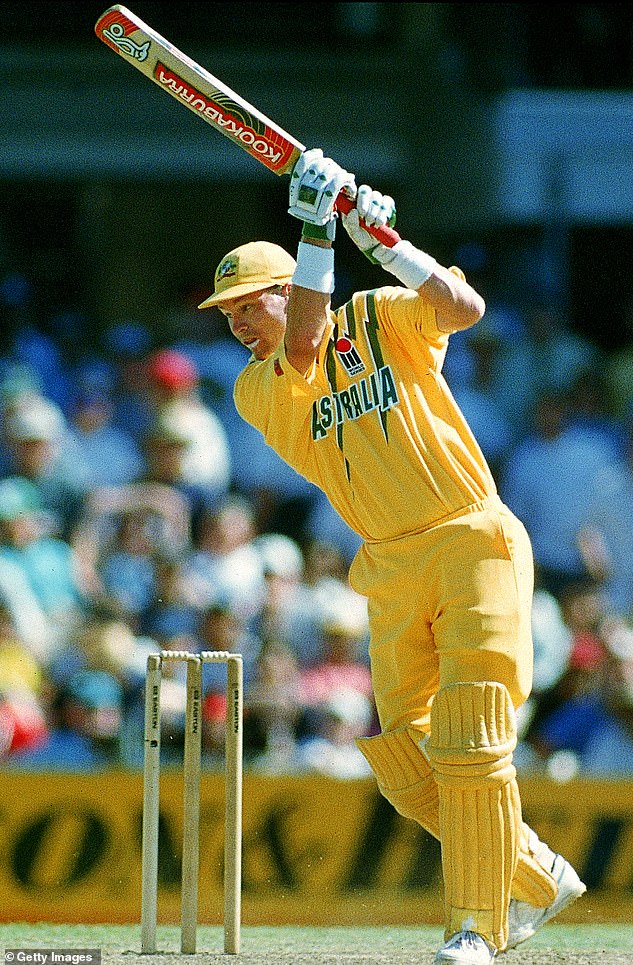 Jones collapsed in the lobby of the 5-star hotel as he walked beside the former fast bowler Brett Lee, who desperately tried to revive him with CPR until paramedics arrived.

He was rushed to hospital but couldn’t be saved.

Jones had been in the city with Lee as part of Star India’s commentary team for the Indian Premier League, which is being played in the UAE because of coronavirus.

Following his death, Jones’ daughter Phoebe said her family was ‘broken’ in an Instagram post mourning the loss of her father.

The tribute post was accompanied by a happy snap from her childhood.

She is wearing Jones’ cricket cap and sitting on his shoulders grinning, as he looks up at her in awe.

‘Our family is eternally grateful to Brett Lee for doing everything he could,’ she said. 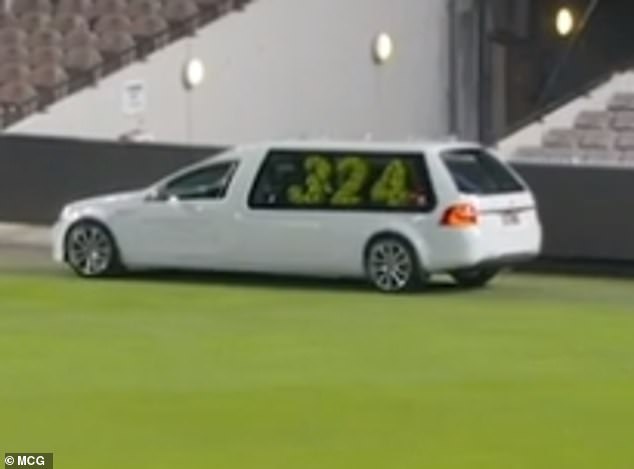 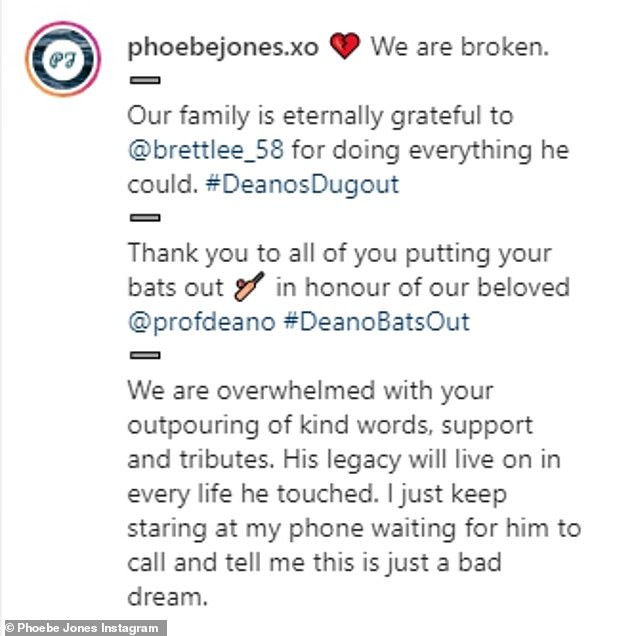 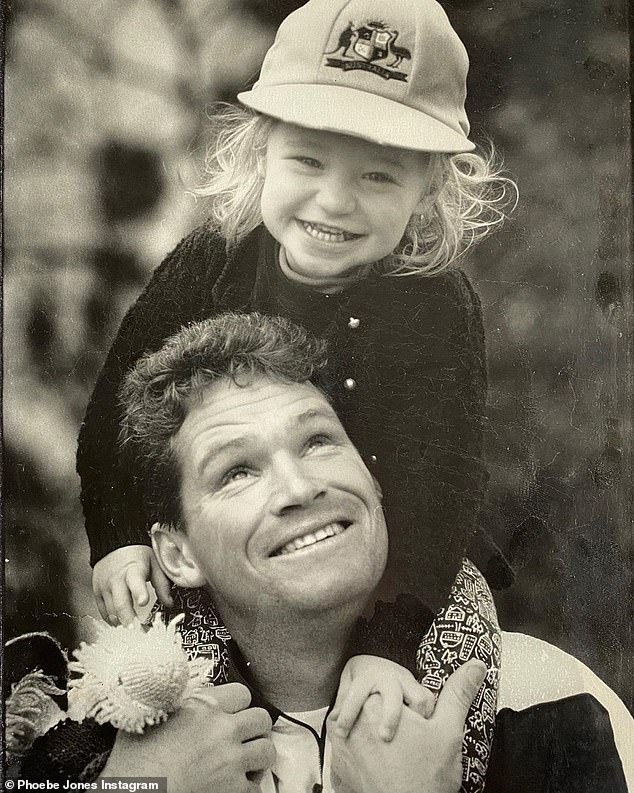 Phoebe thanked cricket fans across the world who put their bats out in honour of ‘Deano’.

‘We are overwhelmed with your outpouring of kind words, support and tributes,’ she said.

‘His legacy will live on in every life he touched.

‘I just keep staring at my phone waiting for him to call and tell me this is just a bad dream.’ 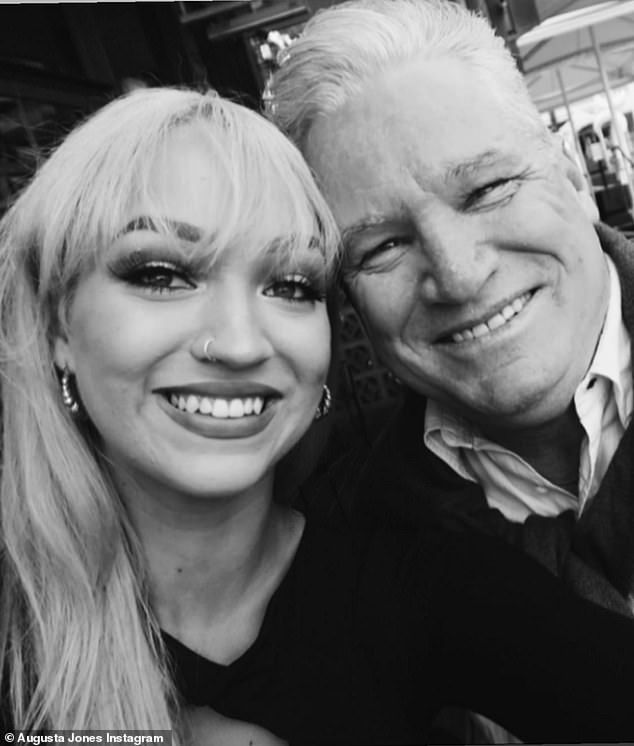 Jones’ other daughter Augusta (left) shared a heartfelt post asking: ‘How will I do this without you?’ 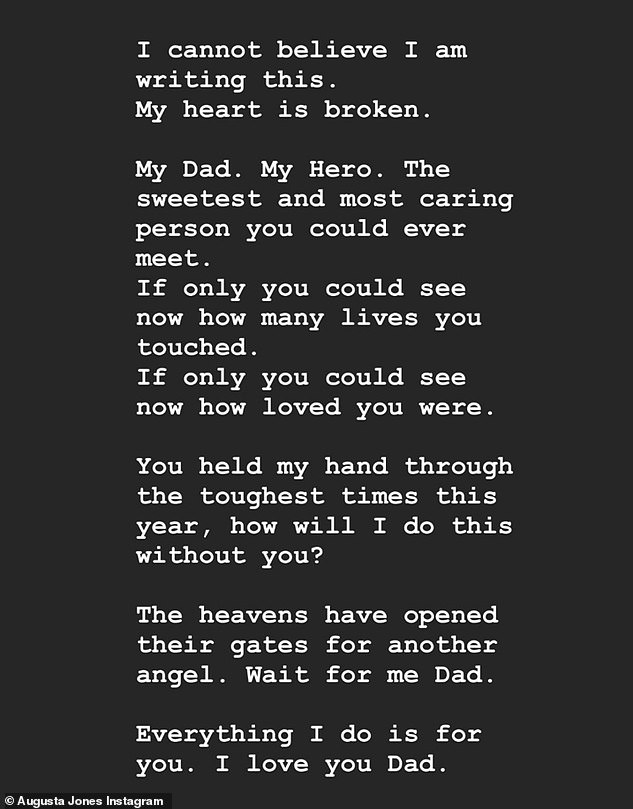 Jones’ other daughter Augusta shared a series of pictures with her father.

‘I cannot believe I am writing this. My heart is broken, My Dad. My Hero. The sweetest and most caring person you could ever meet,’ she wrote.

‘You held my hand through the toughest times this year, how will I do this without you?

‘The heavens have opened their gates for another angel. Wait for me dad. Everything I do is for you. I love you Dad.’ 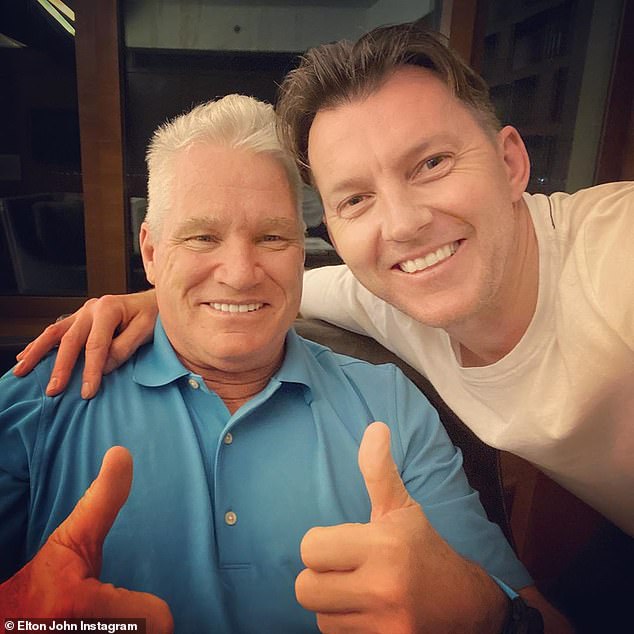 Lee had brought Jones back to life twice with CPR and a defibrillator.

‘Even though I gave my everything in trying to resuscitate Dean with the use of CPR and a defibrillator, I wish there was somehow or someway to bring him back.’

Jones would have normally appeared alongside him in the studio for their IPL pre-match segment ‘Select Dugout’.

‘I think the thing we want to say about Deano is he would have wanted us to be here tonight. It’s pretty much the ‘Select Deano’ we call it. It’s Deano’s dugout tonight,’ Lee said.

‘He is an absolute legend. Firstly to his family and friends we send our condolences. It’s a real tough day for everyone, not only for his close mates … and the whole cricketing world in general.

‘What Deano would’ve wanted is for us to come out here in the dugout, get it done, have some fun for the game we all love.’ 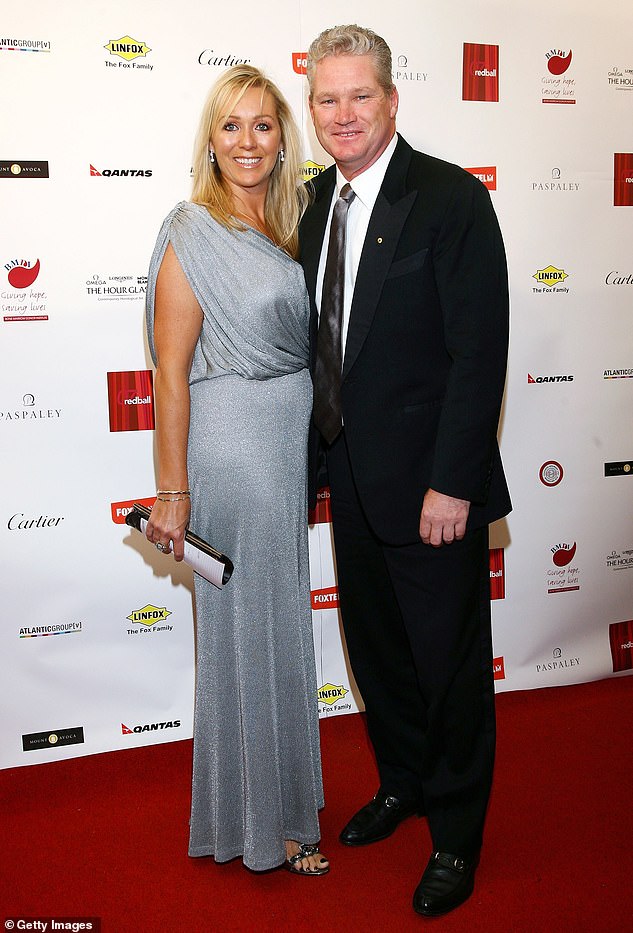 Lee was also reportedly tasked with telling Jones’ wife Jane (left) about the commentator’s death. The couple are pictured together in 2007 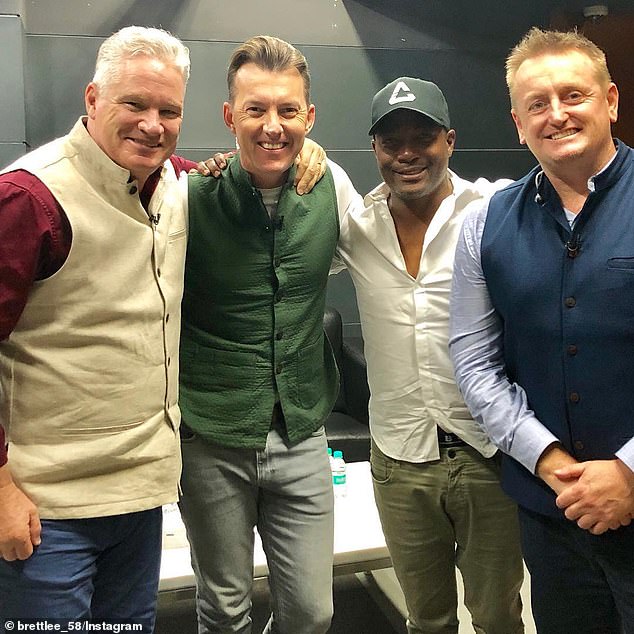 Jones had been staying in the Mumbai hotel with Brian Lara (second from right), Graeme Swann, Scott Styris (right) and Brett Lee (second from left)

‘Who would have thought … this morning we got up, I had breakfast with Deano. I watched him jog up and down the hallway,’ Styris said.

‘That was his way of keeping fit because of course we are in the bubble here in Mumbai. Who would have thought merely a couple of hours later he had this heart attack or some sort of cardiac problem. It’s incredibly sad.

‘He thought this to be the Deano show really. He’s on to me every day with new ideas on how we can make it better. So I think it’s the right thing to do to be here, it’s gonna be hard but we hope to make him feel proud tonight.’ 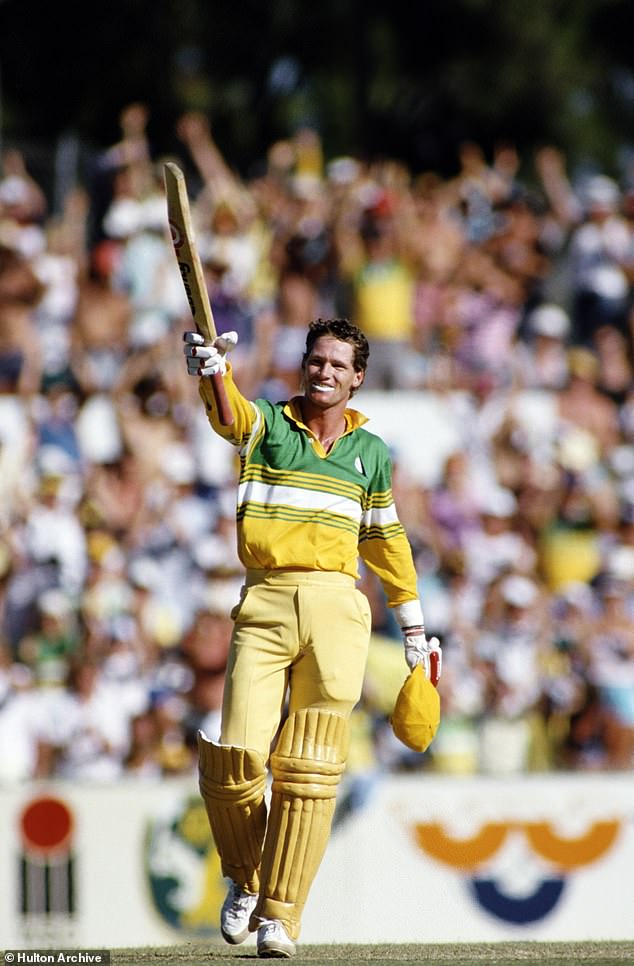 Jones celebrates his One Day International century against Pakistan at the WACA on January 2, 1987 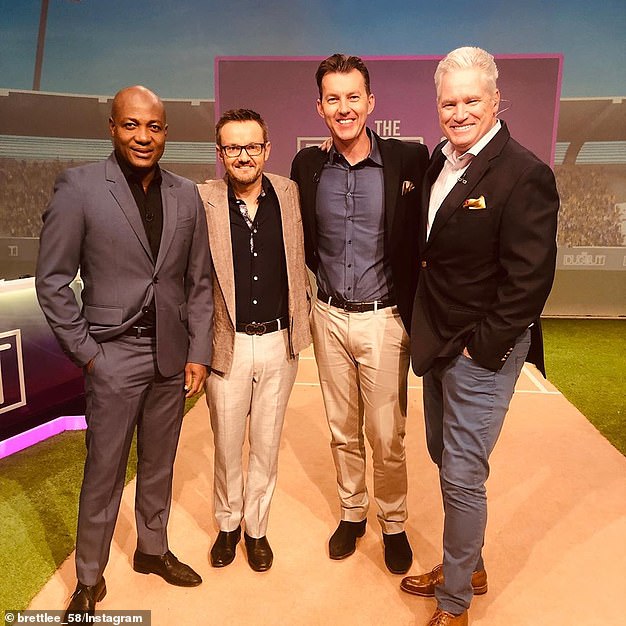 Jones (right) was in the subcontinent as part of Star India’s commentating team for the IPL, which is being played in the UAE. He is pictured with Brian Lara (left), Mike Hesson (second from left) and Brett Lee (second from right)

Just two weeks before Jones’ shock death, his daughter Phoebe shared a Father’s Day Instagram post for her dad, who was already in India at the time.

The snap shows Jones walking back to the pavilion with bat in his hand after being dismissed during a match in his heyday.

Phoebe, who was a little girl at the time, is seen waiting at the fence for her father.

‘Can you spot me? This is me waiting for [dad] to come home and he’s only just left!’ she wrote.

‘Happy Father’s Day to the most dedicated and generous man I know. I love you!’

Tragically, Phoebe did not get to see her father again. 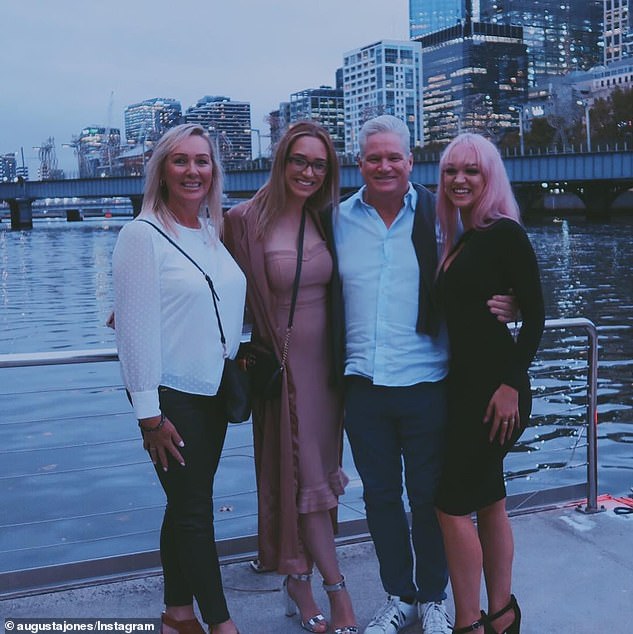 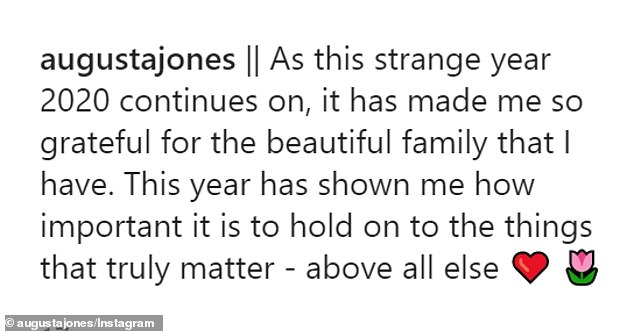 In May, Jones’ daughter Augusta posted a pictured of the family-of-four in an embrace and referred to the coronavirus pandemic. Pictured: The caption Augusta used for the photo 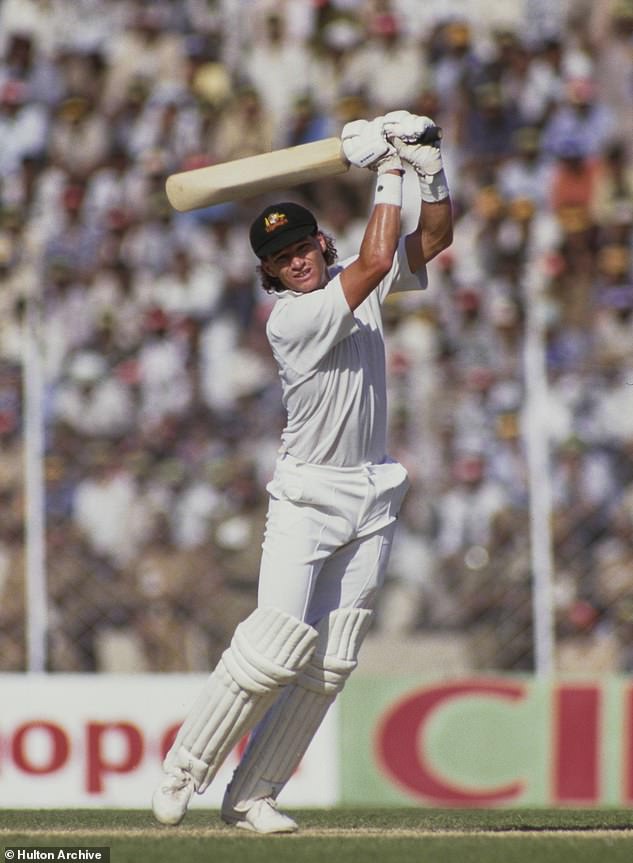 Jones is seen batting during the 1987 World Cup match against India on October 9, 1987 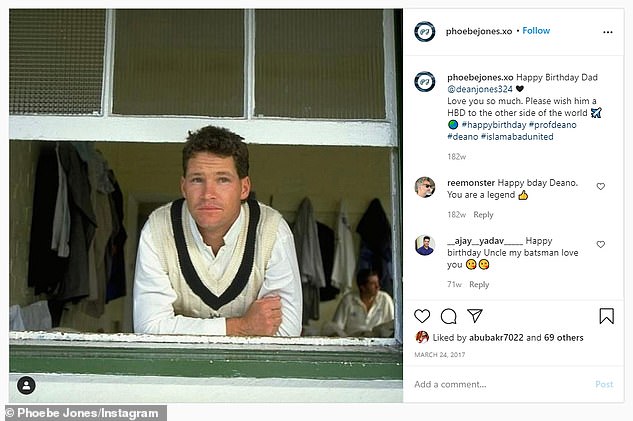 Former Australian cricketer Rodney Hogg: ‘Deano was a star, an absolute star. His depth of knowledge in cricket was very, very incredible.’

Cricket Australia chairman Earl Eddings: ‘Dean Jones was a hero to a generation of cricketers and will forever be remembered as a legend of this great game.’

Cricket commentator Tim Lane:  ‘He was idolised as a player because Victoria didn’t produce any great batsmen for a really really long time.’

Australia coach Justin Langer: ‘Deano was a true legend of Australian sport and world cricket, one of the great players and personalities in a golden time for the game.’

Former Australian cricket captain Allan Border: ‘Deano was unbelievable at the Test level but his aggression at the one day level will be remembered forever.’

Former Australian captain Steve Smith: ‘He was a wonderful player for Australia and he will be missed. My thoughts are with his family. RIP Deano.’

David Warner: ‘I can’t believe this news. So very sad to hear about this. RIP Deano, you will be missed.’

Prime Minister Scott Morrison: ‘A true entertainer at the crease, whose flair with the bat and electric running between the wickets changed the game forever.’

The cricket great played in 52 Tests for Australia and averaged 46.55 batting in the middle order.

He scored 3,631 runs and 11 centuries in his illustrious career.

Former Australian cricketer, friend and teammate of Jones, Rodney Hogg,  told 3AW Jones was the toughest cricketer he has known.

‘Deano was a star, an absolute star.

‘His depth of knowledge in cricket was very, very incredible.’

Cricket Australia chairman Earl Eddings said: ‘Dean Jones was a hero to a generation of cricketers and will forever be remembered as a legend of this great game.’

‘Anyone who watched cricket in the 1980s and 1990s will fondly recall his cavalier approach at the crease and the incredible energy and passion he brought to every game he played.

‘This is a truly sad day. Deano’s loss will be felt not just at home in Australia, but across the globe.’

Australia coach Justin Langer said Jones was integral to the rebuilding of the Test and ODI side that went on to dominate the sport for nearly 20 years.

‘What a great player and a great bloke. We are shocked and very sad to hear of his passing,’ Langer said.

‘Deano was a true legend of Australian sport and world cricket, one of the great players and personalities in a golden time for the game.

‘His role in the team’s World Cup win in 1987 and the 1989 Ashes under AB were a huge turning point for Australian cricket.

‘His double century in Madras was one of the greatest and most courageous innings of all time.

‘We can only hope to make Australians as proud of our team as they were of Deano, he will be missed by the game and millions of people around the world.

‘Our love to Jane and the girls.’

Lara, a former international cricketer for West Indies who had been commentating with Jones, shared a video of the pair jokingly boxing in the studio.

‘I love you too Dean Jones!! You have been a joy and absolute pleasure to work with at Star Sports India,’ he wrote.

‘The world has has lost a real legend and lover of our great game, cricket.

‘You will be dearly missed by many. RIP my brother. My sincere condolences to the Jones family.’ 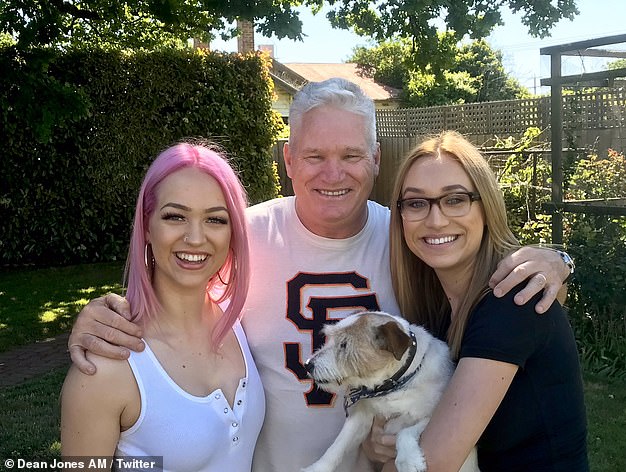 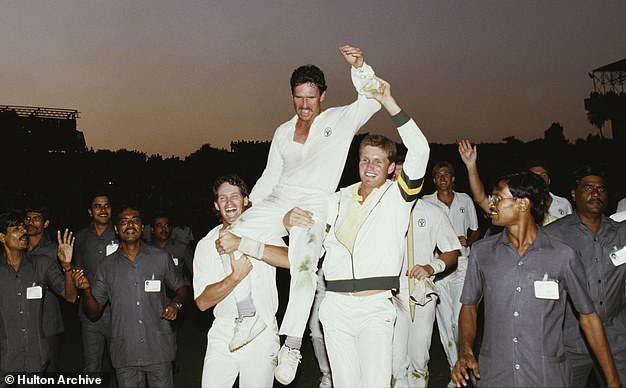 September was the warmest on record, scientists say

Lester Piggott sells trophies from his 4,493 career wins and memorabilia for £112,000 at auction