‘They’re getting special treatment’: Karl Stefanovic unleashes on Australian cricketers rescued by private plane from India as they land in Sydney – avoiding Howard Springs facility ordinary Aussies are forced into

Karl Stefanovic claims 38 Australian cricketers and officials are getting ‘special treatment’ as they land at Sydney Airport after being rescued from Covid-ravaged India and taken to the Maldives.

The cricketers touched down at 7am on Monday and will be whisked onto a bus, where they will be taken to a hotel to complete their mandatory two-week quarantine.

A large contingent of players, including the likes of Steve Smith, David Warner, Pat Cummins and commentator Michael Slater, escaped India as the IPL was suspended amid a catastrophic coronavirus outbreak.

The group were based at an isolated resort in the Maldives, waiting for the federal government’s travel ban from India to end.

The ban was lifted from Saturday, paving the way for the group to return home after Cricket Australia negotiated a deal for the group to be excluded from the weekly cap of citizens allowed to fly into the country.

Cricket Australia interim boss Nick Hockley earlier said no special exemptions were expected – or asked for – from the government.

‘Our priority is working with the Australian government and the relevant state governments to make sure that we are not taking (flight) spaces off anyone else,’ he said.

‘Any kind of quarantine arrangements would be over and above the cap.’

However, many on social media were quick to point the cricketers were in fact receiving preferential treatment. 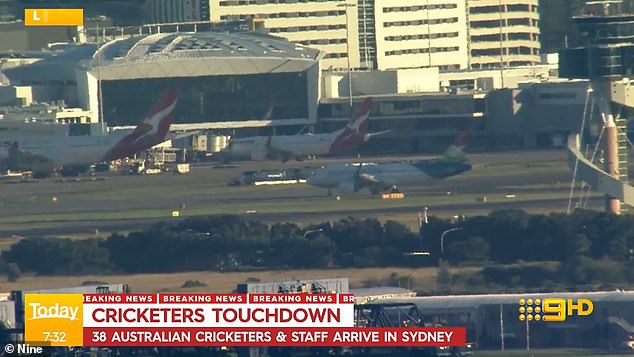 One declared ‘once again different rules (apply) for celebrities and sports stars. Absolutely pathetic and most people have had a gutful.’

Another asked how ‘mere mortals would go about getting special treatment’, with a third stating the cricket group ‘should pay all associated costs in quarantine’.

It was earlier believed the cricketers would touch down in Darwin for their two-week quarantine.

Atomic clock: new design will be only less than a tenth of a second out after 14 BILLION years

COVID-19: Indian variant cases double in UK to nearly 7,000 in just a week