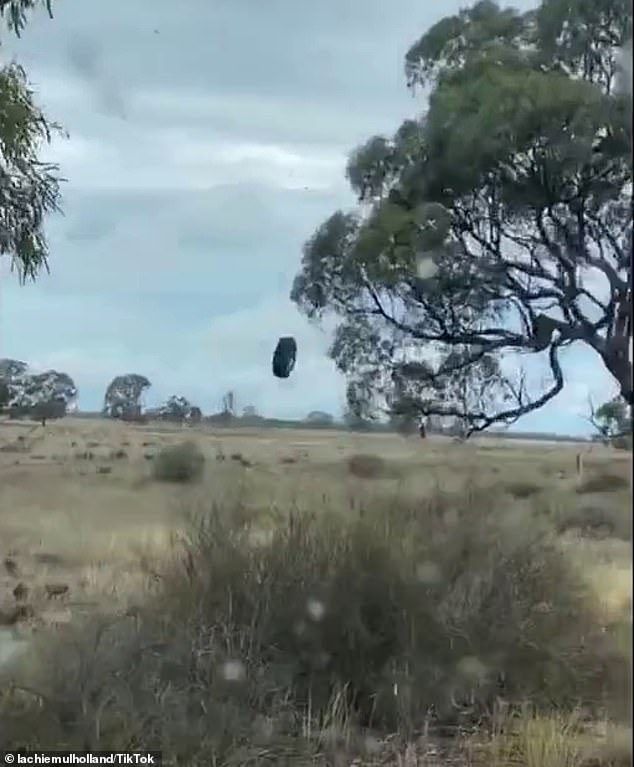 An Australian man has captured the moment his entire wheel flew from his Nissan Patrol as he drove down a dusty road.

Lachlan Mulholland was driving in outback Moulamein, in the south of NSW, when the front left wheel of his Nissan Patrol became unhinged and catapulted into the air.

‘That is the tyre of this car, are you kidding me,’ he said in the video.

Lachlan Mulholland was driving along in outback Moulamein, NSW when the front left wheel of his Nissan Patrol became unhinged and catapulted into the air (pictured)

In the footage, Mr Mulholland slowly pulled over his now three-wheeled vehicle as he watched the tyre bounce off in the distance.

Mr Mulholland eventually found the wheel perched next to a gum tree. He shared the footage to TikTok where it quickly went viral with over 400,000 views.

Viewers flooded the comment section praising the man for his casual reaction to the potentially dangerous accident.

‘What happened Mr Drifter,’ another commented, while a third said: ‘I love how the wheel is just hopping away like a kangaroo.’

Others questioned how Mr Mulholland captured the unlikely event on camera.

Mr Mulholland said he was able to secure the wheel back on with the help of his cousin, who works at a nearby towing company.

Turkey declares its optimism for improved relations with Egypt

Sarika Kale: The sports star who could afford just one meal a day

Sarika Kale: The sports star who could afford just one meal a day