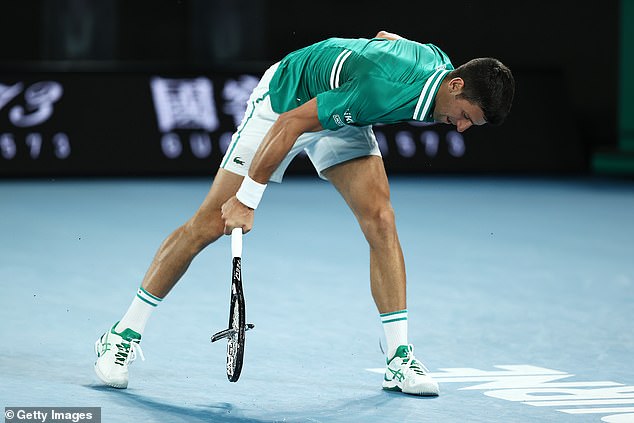 Smashing rackets on court is becoming somewhat of a bad habit for Novak Djokovic, who again lost his temper during Tuesday’s quarter-final victory over Alexander Zverev at the Australian Open.

Djokovic, who has never been shy of showing his emotion, lost his cool at 3-1 down in the third set.

The world No 1 sent a return crashing into the net to give Zverev the advantage and a chance to extend his lead to 4-1, which the German took with an ace on the following point.

Djokovic reacted to losing the deuce point by screaming and slamming his racket into the ground.

The Serbian then sat at the back of the court in a sulk before asking for the mess caused by his racket smash to be cleaned up.

It wasn’t until after he threw his racket at his bag that he was given a warning.

Djokovic’s mess is cleaned up following his outburst, which he was warned about on Tuesday

It was reminiscent of when Djokovic smashed his racket during the quarter-finals of the Italian Open last September against German qualifier Dominik Koepfer.

Djokovic went on to win the match, just as he did on Tuesday, on his way to clinching the tournament.

He admitted afterwards that it was his way of sometimes releasing his anger, something that he said didn’t set a good example to his younger fans.

That happened only a couple of weeks after Djokovic was disqualified from the US Open when he accidentally hit a line judge with a ball towards the end of the first set of his fourth-round match against Pablo Carreno Busta.

Djokovic had to forfeit the $250,000 he was due for reaching the fourth round and was widely criticised for losing his temper even if hitting the line judge was accidental.

And while Tuesday’s outburst was nothing close to his behaviour at Flushing Meadows, those watching the match against Zverev weren’t impressed.

‘I hope he’s fined for that behaviour,’ wrote one viewer. ‘Bad example for the children who look up to him. Bad. Bad,’ added another.

The White House: Biden’s first contact with a leader in the region will be with Israeli Prime Minister Netanyahu