Fresh from joining the elite Aussie men’s winners’ circle with his Singapore Open win on Sunday, the 21-year-old Sydneysider explained how former world No.1 Hewitt’s blueprint for success was one he would now be following.

‘I want to be remembered just like he was – that I give my all whenever I step out onto the court,’ said Popyrin, after coming from a set down to subdue the final challenge of Kazakh Alexander Bublik 4-6 6-0 6-2. 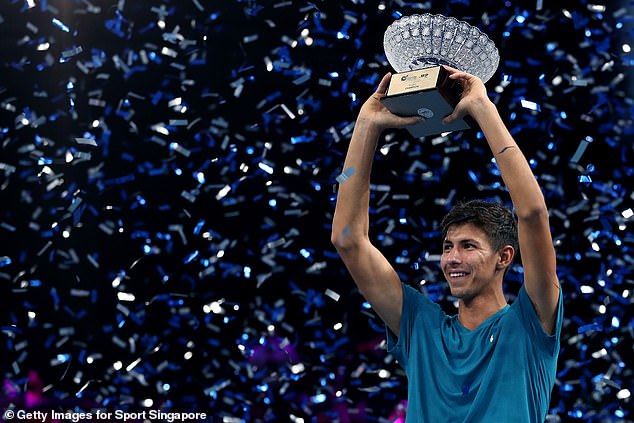 Popyrin’s latest breakthrough, which has propelled him to a new career-high of world No.82, follows his remarkable win at the Australian Open over David Goffin.

In Melbourne, he saved four match points in a five-set defeat of the No.13 seed, a performance that recalled Hewitt’s famed resilience.

Popyrin’s power game, which saw him hammer down 59 aces for the week in Singapore, is very different to Hewitt’s – but not their attitude.

When he needed to ‘grind’ it out against the unpredictable Bublik, Popyrin did just that to wrest control of the final set.

‘I mean I don’t think our game necessarily is the same but I think Lleyton was such a fighter, such a grinder, he gave his all out there – and now that’s what I want to be remembered like,’ said Popyrin.

He’s always been a big admirer, ever since that day in 2008 as a sleepy eight-year-old in the Rod Laver Arena, he tried to keep awake alongside mum and dad as Hewitt beat Marcos Baghdatis in the famous marathon that ended at 4:33 am. 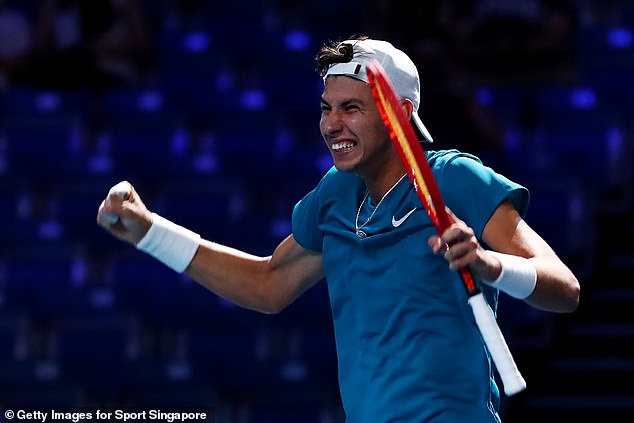 Popyrin certainly showed a touch of Hewitt steel in Singapore, winning all five of his tiebreaks, including two against former US Open champion Marin Cilic to reach the final.

Popyrin, a product of the academy of Serena Williams’ mentor Patrick Mouratoglou, understands how far he must go to ever get close to the achievements of Hewitt, who was last week inducted into the International Tennis Hall of Fame.

‘There’s still a lot of hard work to be done, I know that,’ said Popyrin.

‘My team knows we are gonna do that hard work but it’s definitely a good start for me and hopefully I can build on this result and have a good year.’

If it is down to hard work, Popyrin, who was born in Sydney to Russian parents and who’s put so much into tennis since starting as a four-year-old, won’t be found wanting.

He reflected on ‘a lot of sacrifice, of dedication and hard work’ to earn the title which has now begun to fulfil some of the high expectations of him that came with his French Open junior title win four years ago.

This time last year, he admitted, he did slip, beginning a three-month lockdown when he ended up ‘putting on a few kilos and really not being fit as I could be’ and had to knock himself back into the right shape at the end of 2020. 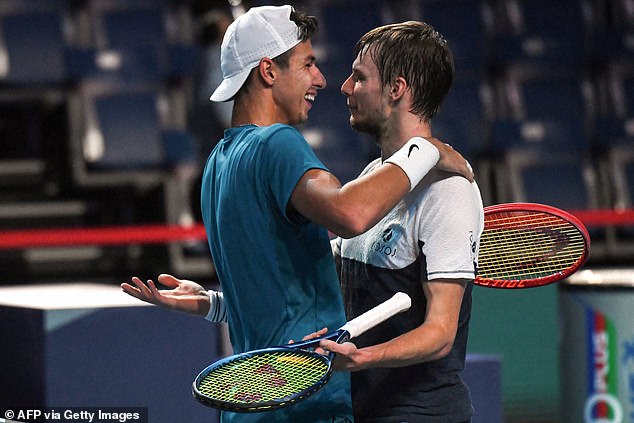 Now, though, he’s convinced the ‘unbelievable feeling’ of landing that maiden title could only ever be matched by one thing.

‘Maybe I’ll get the (same) feeling if I win my first grand slam – but hopefully that will happen!’ he said.

Social media was alight with praise for the young tennis star.

Friday news quiz: Can you nail these 10 brain teasers or will you crash and burn like the European Super League?

Hebrew "Walla" website: The Iranian Revolutionary Guard is responsible for the attack on the ship in the Gulf of Oman