By Charlotte Karp For Daily Mail Australia and Aap

An Australian tennis star claimed an emotional first round win at the Australian Open while wearing a black $6 shirt from Kmart.

Thanasi Kokkinakis donned the budget shirt during his match against South Korea‘s Soon-woo, winning in straight sets of 6-4 6-1 6-1 on Tuesday evening.

The 24-year-old has earned more than $1.8million throughout his career, but chose an all-black outfit for the opening week of the grand slam tournament.

‘It’s a Kmart special. I went to Chadstone, bought some $6 tees and went to work,’ he said. 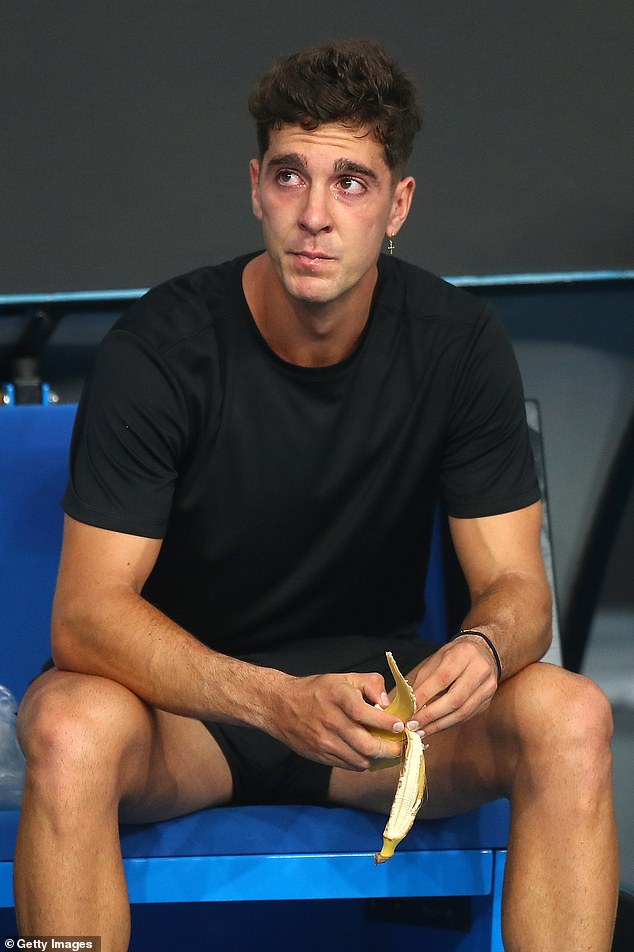 Pictured: Thanasi Kokkinakis wearing a $6 t-shirt from Kmart during his Australian Open match on Tuesday 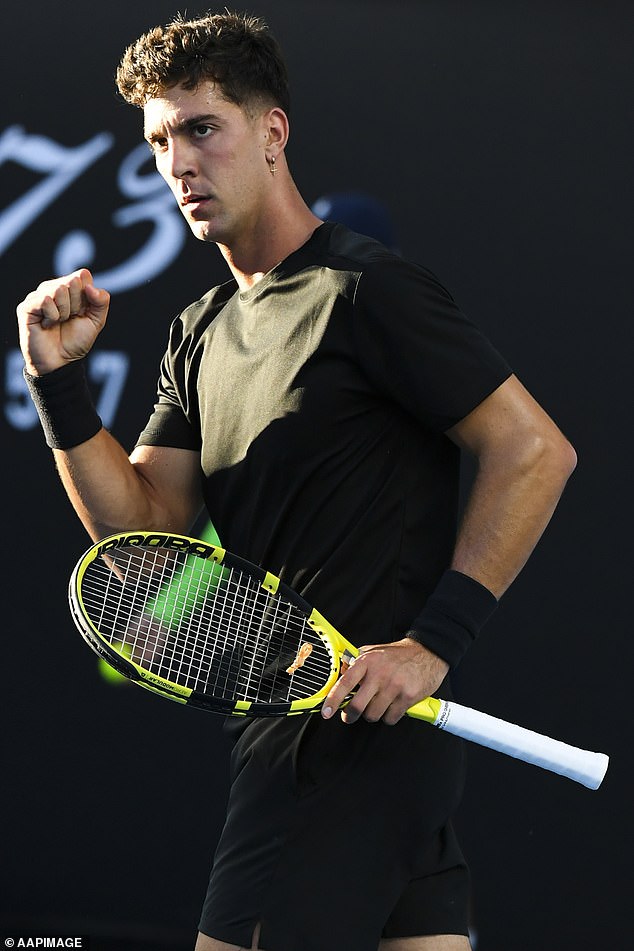 ‘I just felt comfortable in it. I tried to order some more online but they got cancelled and they didn’t make it through to South Yarra.’

The South Australian had not won a grand slam match in Melbourne since 2015 following a spate of injuries and illnesses that threatened to destroy his career.

Along with serious back, knee, shoulder, groin and pectoral injuries, Kokkinakis was unable to play last year after being struck down with glandular fever.

The win on Tuesday was his second match since September 2019.

When speaking about the injuries that have plagued that last six years, the player almost broke down in tears. 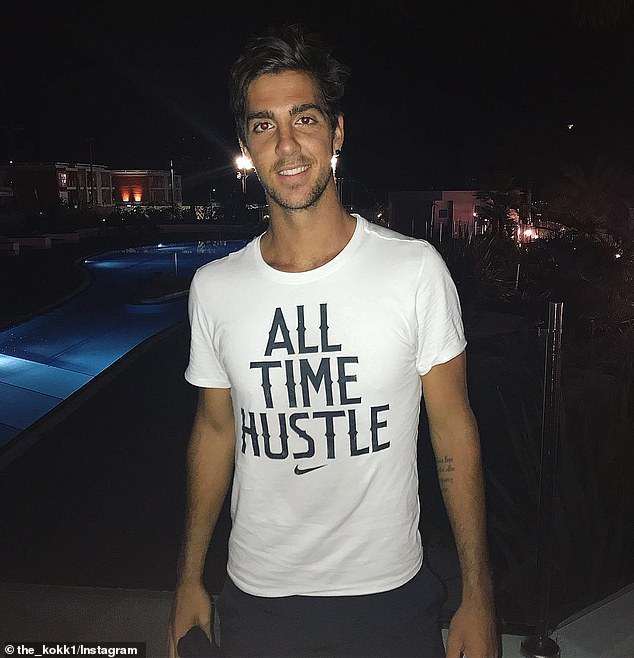 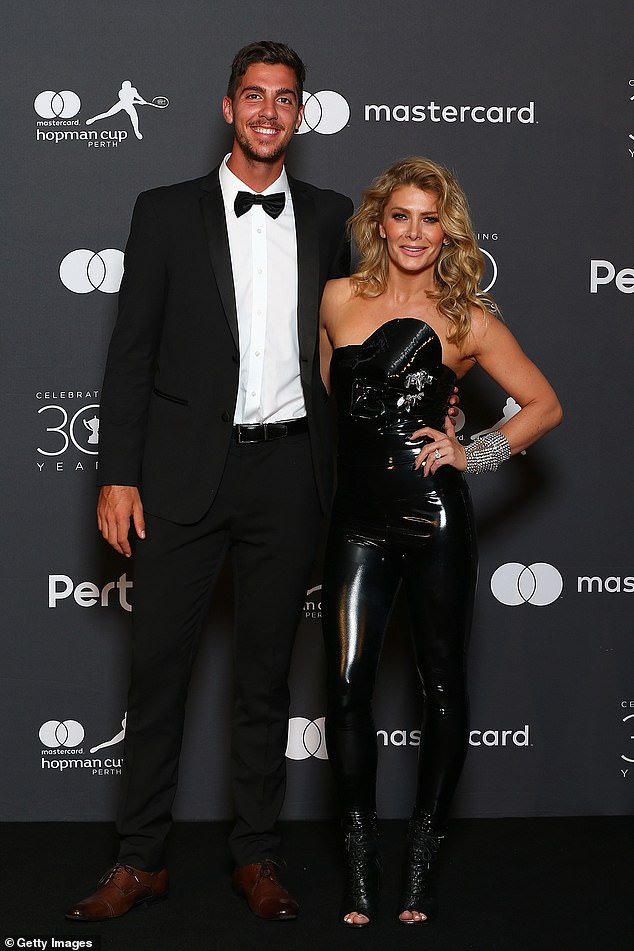 Natalie Bassingthwaighte of the Rogue Traders poses with Thanasi Kokkinakis of Australia at the 2018 Hopman Cup New Years Eve Ball at Crown Perth on December 31, 2017

‘At 5-0 (in the third set) I felt this massive roar and cheer from the crowd and I started tearing up,’ Kokkinakis said.

‘It was a bit of a soft moment but there was just so much stuff behind the scenes to get back to that point that not a lot of people realise. I definitely got a bit emotional.

‘I had a lot of friends and family there watching. They probably made up about 90 per cent of the stands, so I’m appreciative of that.

‘Just playing with that energy and crowd and being able to win – there was so much work behind the scenes and so much pain – it’s just a massive relief.’

After the win, Kokkinakis recieved a private message of congratulations from Roger Federer, whom he beat in a stunning upset years before.

‘Nice one Thanaser. Happy for you,’ the message said. 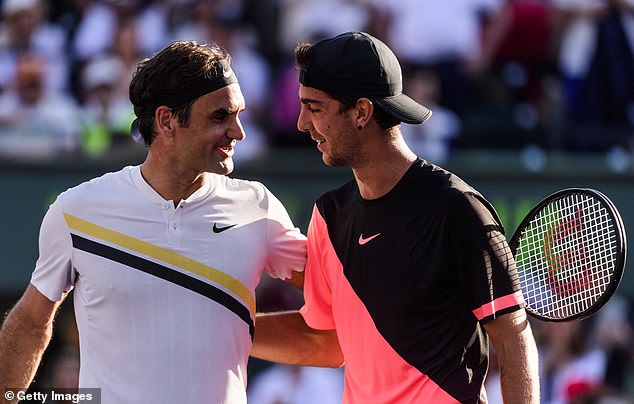 Thanasi Kokkinakis is congratulated by Roger Federer after winning their match 3-6 6-3 7-6 on Day 6 of the Miami Open at Crandon Park Tennis Center on March 24, 2018 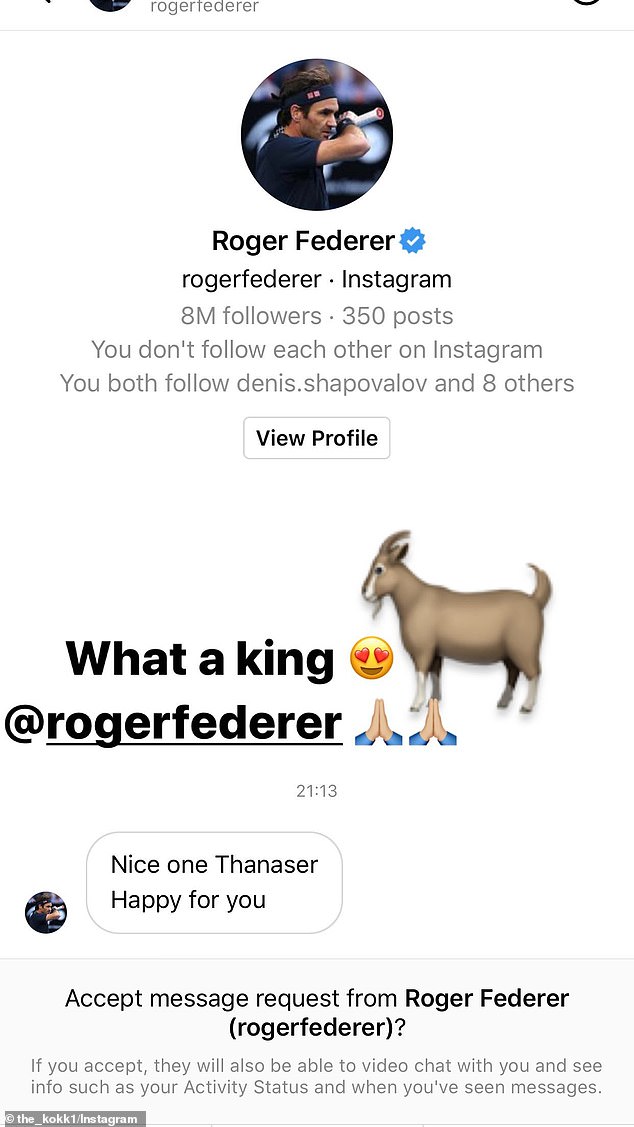 Kokkinakis shared the message on his Instagram story and said, ‘What a king @rogerfederer’, adding an emoji with heart eyes

Kokkinakis shared the message on his Instagram story and said, ‘What a king @rogerfederer’, adding an emoji with heart eyes.

Kokkinakis blasted 30 winners as he out-gunned and out-manoeuvred Kwon in a match that lasted just 93 minutes.

‘My serve was a massive part and I thought I kept my composure very well,’ Kokkinakis said.

‘I stayed level-headed throughout the whole match, so that was a key.

‘My body feels really good at the moment so I can’t wait to get out there and have another crack.’

Before Tuesday night, Kokkinakis’ most recent win at his home grand slam was in 2015 when he shocked 11th seed Ernests Gulbis in a five-set epic.

He is now ranked 267th, but peaked at No.69 and has the scalp of Roger Federer among a host of top-20 players to his name.

COVID baby boom was a bust: Five states report up to 50,000 fewer births since pandemic began