A young woman with hundreds of thousands of followers on social media has busted common misconceptions about autism in a video viewers claim ‘everyone should watch’.

Chloe Hayden, 23, is a YouTuber and motivational speaker from Geelong, 75 kilometres southwest of Melbourne CBD.

She is one of an estimated 353,880 Australians who live with Autism Spectrum Disorder (ASD), a range of developmental disabilities including autism and Asperger syndrome that cause significant social, communication and behavioural challenges.

Men and women with ASD communicate, interact and learn differently to typically developing adults, with cognitive abilities ranging from gifted to severely impaired. 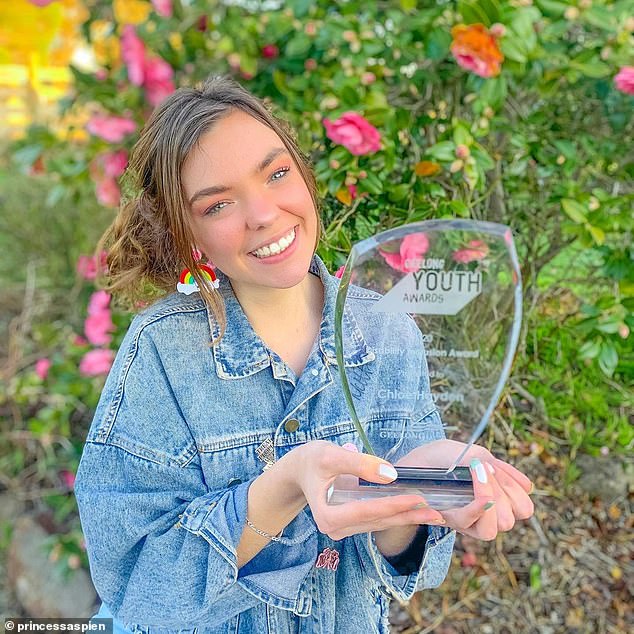 Chloe Hayden (pictured) is a YouTuber and motivational speaker from Geelong, VIC. She is one of an estimated 353,880 Australians who live with Autism Spectrum Disorder (ASD)

One in 70 Australians were diagnosed with the disorder in 2019.

Ms Hayden – who raises awareness about ASD across her much-followed social media accounts – dispelled common myths about autism in a video uploaded to TikTok on January 18 in a bid to dismantle false stereotypes.

In the clip, which has since gone viral, she debunks widely held misconceptions including ‘everyone is a little bit autistic’, ‘girls can’t be autistic’ and ‘vaccines cause autism’.

Ms Hayden told Daily Mail Australia she grew up feeling ‘anxious, hypersensitive and isolated’ until she was diagnosed with autism and became educated about why she was experiencing such powerful emotions. 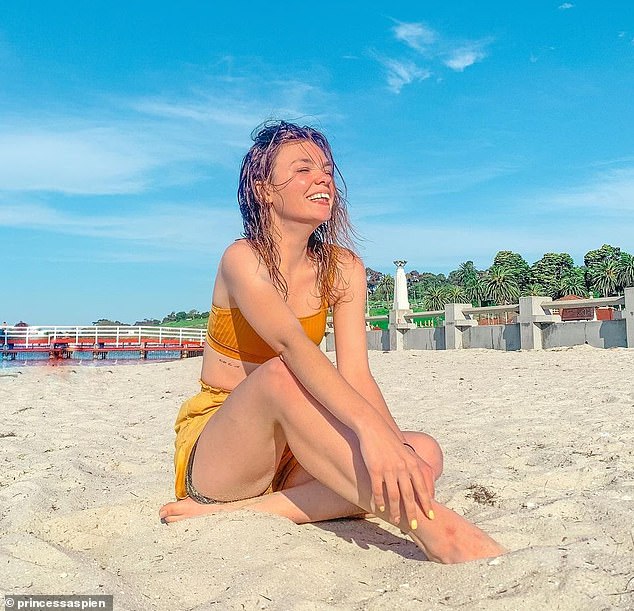 Ms Hayden (pictured) said she grew up feeling ‘anxious, hypersensitive and isolated’ until she was diagnosed with autism and learned why she was experiencing such powerful emotions

* Reliance on rules and routines

* Being upset by relatively minor changes

* Engaging in repetitive behavior such as flapping hands or rocking

* Children not responding to their name by 12 months

* Children not pointing at distant objects by 14 months

‘Everyone is a little bit autistic’

By saying ‘everyone is a little bit autistic’, Ms Hayden says you are invalidating and belittling the experience of autistic men and women.

‘Don’t invalidate my experience by trying to push yourself into a situation you will never understand.’

Claims that everyone is ‘mildly’ or ‘a little bit’ autistic have crept into vernacular in recent years, most commonly used to describe traits such as feeling overwhelmed in crowds or becoming obsessed with a new hobby.

In reality, an autism diagnosis is only made when a person has a specific set of symptoms that interfere significantly with their social, behavioural and communicative abilities.

To be diagnosed as autistic, a person must meet criteria relating to two key areas: ‘deficits in social communicational ability’ and ‘restrictive or repetitive behaviour patterns’.

‘Everyone who is autistic is part of that palette. No one is more or less autistic than anyone else – it’s all just autism,’ she said. 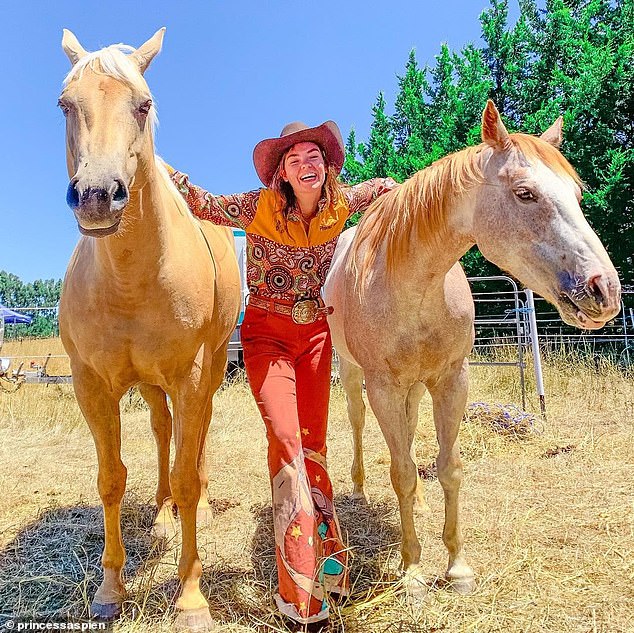 Ms Hayden also slammed the use of ‘functioning labels’, which deem those with autism ‘high’ or ‘low’ functioning depending on the severity of their symptoms.

‘Functioning labels tell one group they’re incapable, and another group that their struggles don’t matter,’ she said.

Ms Hayden believes labels deny autistic men and women the chance to thrive in their own unique way.

Ms Hayden hit out at the claim that ‘girls can’t have autism’, revealing she had always felt ‘like an outcast’ until she was formally diagnosed at the age of 13.

This is considered early for girls.

Ms Hayden argues that autism stereotypes are created around male symptoms, such as introversion, social awkwardness and an inability to maintain eye contact.

Girls on the other hand are more likely to mirror the behaviour of those around them, which leads them to over compensate with loud expressions and gestures.

Boys with autism often experience severe difficulties with language and speech development, while girls typically have more advanced vocabularies than their peers who are not on the spectrum.

Because of this, Ms Hayden said girls are often misdiagnosed with ADHD and OCD.

‘Women can be autistic, we simply show it differently,’ she added.

‘Everyone is a little bit autistic’

‘Diet and parenting can cure autism’

While autism can affect either sex, studies show that boys are four times more likely to be diagnosed with ASD than girls.

But research from Autism Awareness Australia suggests the true incidence of autism in females is higher, with some estimates putting the ratio as two boys for every one girl.

Parents with daughters on the spectrum often share frustrating tales of delayed diagnoses, which is thought to stem from autism presenting differently in women and going unrecognised as a result.

Research suggests girls are better at masking symptoms by observing and mimicking the behaviour of those around them.

Boys are generally not as skilled at masking, which is why they are diagnosed at an earlier age. 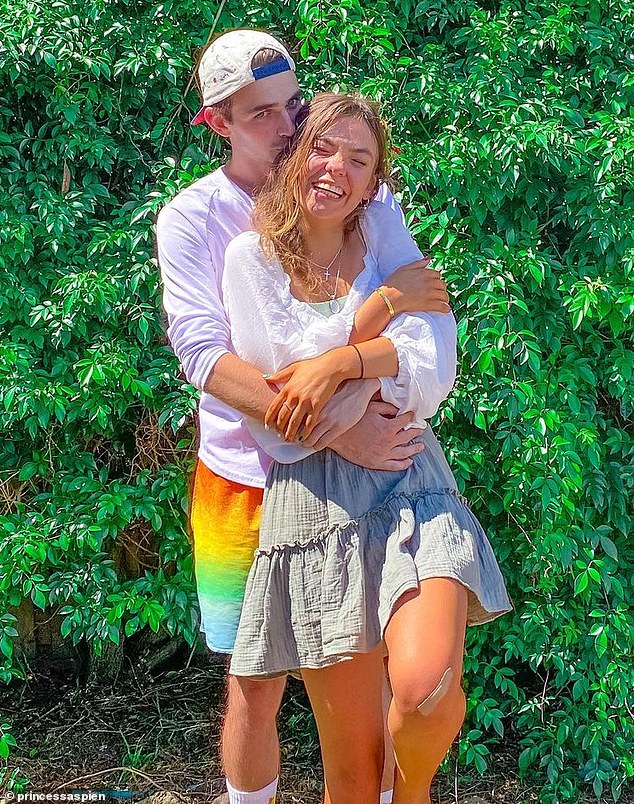 If you believe vaccines cause ASD, Ms Hayden says you ‘may as well be living in the 18th century’.

‘Who we are is who we’re supposed to be,’ she said.

Whispers suggesting a link between vaccines and an increased incidence of autism have grown louder in recent years, leading to hesitancy to receive what are often essential jabs.

A largescale study of 537,303 children born in Denmark found unvaccinated kids were just as likely to develop autism as those who were vaccinated, according to a report from the Australian Health Department.

After the results of this study were combined with research covering almost 1.5million children from other countries around the world, researchers concluded that vaccination does not cause or increase the risk of autism. 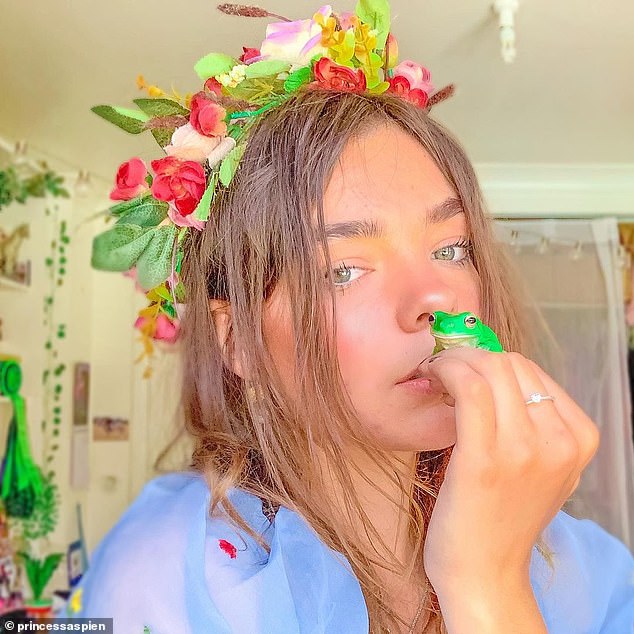 The idea that vaccination caused autism was attractive to many desperate to determine the cause of the disorder.

Current research suggests that autism cannot be explained by a single cause, but likely due to a combination of developmental, genetic and environmental factors.

Moves to dispel myths linking vaccination to autism are accelerating against the backdrop of the Covid vaccines which are slowly being rolled out around the world.

Facebook announced Monday it will remove all posts – not just ads – claiming that vaccines cause autism, in what is the company’s most aggressive step yet to combat antivaxxer conspiracy theories circulating on social media.

A spokesperson confirmed the ban will be in place ‘for the duration of the Covid public health emergency’, Forbes reported. 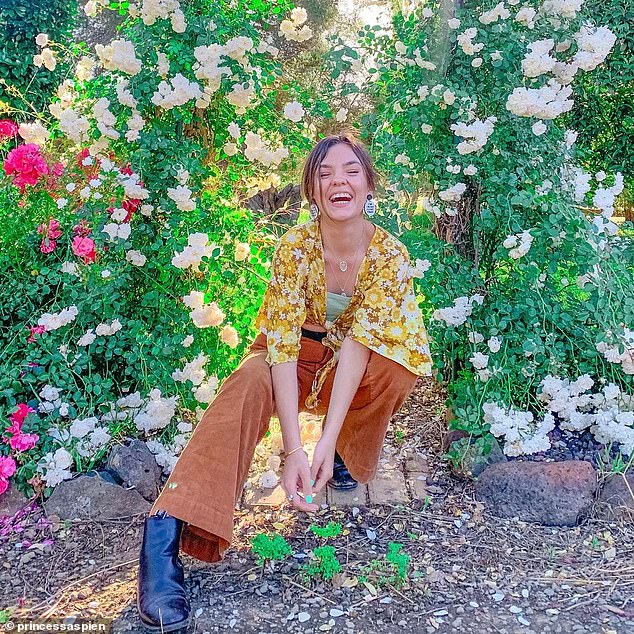 ‘Diet and parenting can cure autism’

Ms Hayden lashed out at the claim that diet and exercise or specific style of parenting can ‘cure’ autism, saying: ‘It’s not curable nor should it be cured.

‘You can’t change the wiring of my brain, and thinking you can or should is entirely invalidating of who I am,’ she said.

There is no evidence that specialised diets are a treatment for any form of ASD, according to a report from the Mayo Clinic.

Frustration over uncertainty about the cause of autism leads many to experiment with restricting certain foods that contain gluten and casein – a protein found in dairy products – which have been touted as possible triggers, despite little to no evidence.

The suggestion that tailored parenting and disciplinary techniques can be used to ‘cure’ autism are equally unfounded.

While child development experts agree that children with autism should receive treatment and skills training as soon after diagnosis as possible, there is no ‘one-size-fits-all’ approach and no cure. 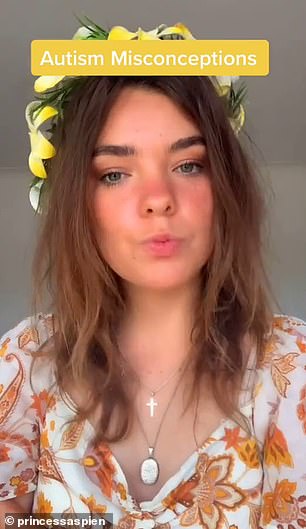 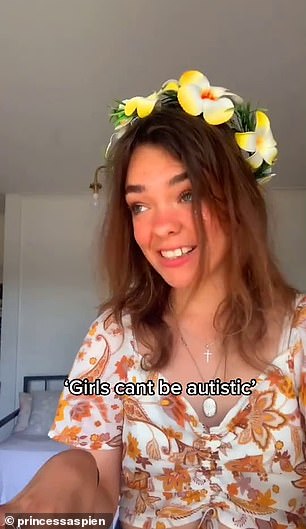 The goal of treatment is to improve a child’s ability to function by reducing the severity of the symptoms of ASD and supporting their learning and development.

Ms Hayden’s clip, which has been viewed more than 68,000 times since it was uploaded online, has sparked passionate responses.

‘All of the people [writing] ‘but’ ‘if’ in the comments, y’all are the freaking problem,’ one viewer replied.

‘We do not need to be fixed. We are not broken!’

A second said a doctor recently told her that girls can ‘grow out of’ ASD, which is the ‘reason less women are diagnosed’.

‘I was about to punch a doctor,’ she added.

Others thanked Ms Hayden for sharing the video and raising awareness about common misconceptions for those unfamiliar about autism.

For support regarding caring for children or adults with ASD, call Autism Spectrum Australia on 1800 277 328.

You can also visit the website at Autism Spectrum Australia or Spectrum Support Australia.

Magistrate who dated court clerk 45 years younger than him claims her $180,000 super

Planet Hollywood Las Vegas to reopen, but the hotel is only booking weekend stays

Bitcoin Price Likely To Experience A Death Cross This Weekend! 2021

President Biden and Russian President Vladimir Putin sat down in Geneva for a widely anticipated show...

Bitcoin Price Likely To Experience A Death Cross This Weekend! 2021