By Nigel Colborn for the Daily Mail

Should your garden have lost its autumn mojo, brighten it up with chrysanthemums. Late border varieties are in their prime now, so when other plants are dead or dying, these are freshly in flower.

They’ll last for weeks yet, and are excellent for cutting, too.

Don’t confuse these with large florists’ varieties. Like those, they’re colourful, gently aromatic and last for ages.

But unlike flower shop chrysanths, these were developed as hardy, long-lived outdoor perennials.

Chrysanthemums are among the oldest known ornamentals. Prized by the ancient Chinese and hybridised for millennia, they come in a vast range of varieties from giant monster blooms to stunted little pot plants. 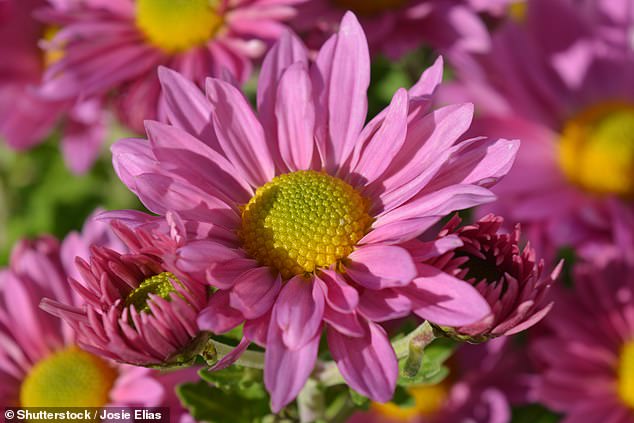 Flowers are small to medium. But with singles, doubles, reflexes and pompons they come in masses of shapes and colours.

The earliest varieties can flower as early as August. The latest run deep into November, sometimes even December.

As cut flowers, they last as long as shop-bought blooms. But unlike florists’ varieties, they’re shapely outdoor plants, with pleasing foliage and flowers which are durable in all weathers. Tall and medium varieties such as single, pink C. Clara Curtis grow to 75cm, with many-branched sprays.

Others such as Ruby Mound are shorter with slightly inwardcurving petals. There are bronzes including Starlet whose petals are spoon-shaped and Mavis Smith with pink daisy flowers into November. 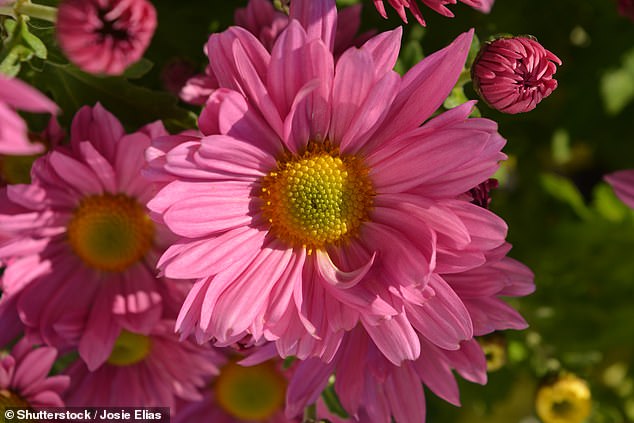 Nigel says that although the flowers are sized small to medium, they come in a range of colours (stock image)

You might find plants in garden centres. But specialist nurseries carry a wider choice.

Woolmans.com offer a collection with three doubles and two single-flower types. Shireplants.co.uk stock a wider range and Woottens of Wenhaston (­woottensplants.com) is also worth a try.

Border chrysanthemums are as pretty outside as when arranged in a vase. They blend readily with Michaelmas daisies. They make lovely solo plants, in containers or the ground.

Any fertile soil will suit, provided it’s well-drained and in sun. Tall and mid-height varieties will need support. Others develop stocky, self- supporting mounds.

You can propagate new plants from cuttings, ‘slips’ or by division. Split clumps every third year, preferably from mid-March. By then, the spring shoots will be showing first baby leaves.

For ‘slips’, instead of splitting a clump, select and dig out strong, healthy shoots. Each slip should have leaves and a few roots.

Re-plant them in groups of three or five, with 10cm between each, 45cm to 60cm apart.

In the first summer, each of the slips will grow, branch and merge to become a single clump.